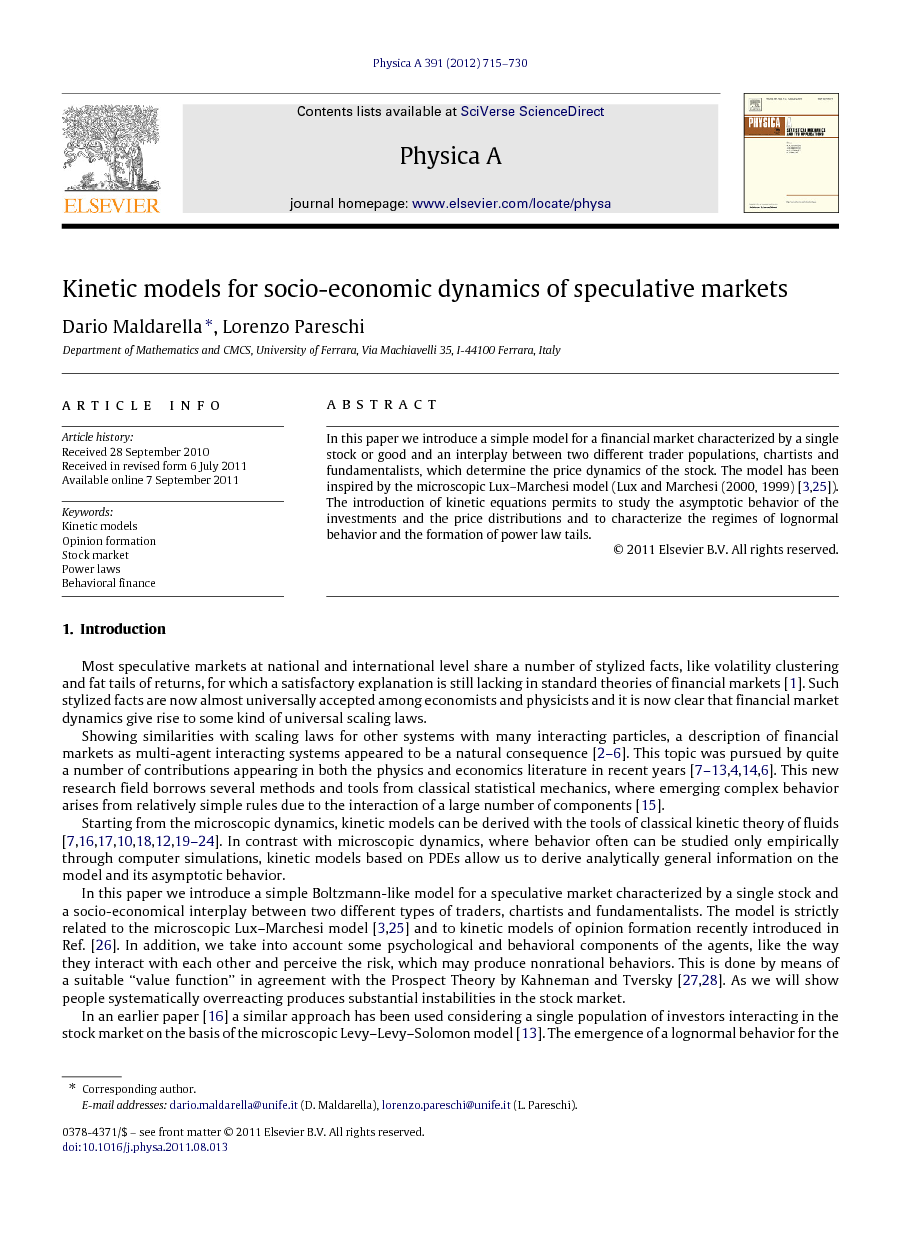 In this paper we introduce a simple model for a financial market characterized by a single stock or good and an interplay between two different trader populations, chartists and fundamentalists, which determine the price dynamics of the stock. The model has been inspired by the microscopic Lux–Marchesi model (Lux and Marchesi (2000, 1999) [3] and [25]). The introduction of kinetic equations permits to study the asymptotic behavior of the investments and the price distributions and to characterize the regimes of lognormal behavior and the formation of power law tails.

Most speculative markets at national and international level share a number of stylized facts, like volatility clustering and fat tails of returns, for which a satisfactory explanation is still lacking in standard theories of financial markets [1]. Such stylized facts are now almost universally accepted among economists and physicists and it is now clear that financial market dynamics give rise to some kind of universal scaling laws. Showing similarities with scaling laws for other systems with many interacting particles, a description of financial markets as multi-agent interacting systems appeared to be a natural consequence [2], [3], [4], [5] and [6]. This topic was pursued by quite a number of contributions appearing in both the physics and economics literature in recent years [7], [8], [9], [10], [11], [12], [13], [4], [14] and [6]. This new research field borrows several methods and tools from classical statistical mechanics, where emerging complex behavior arises from relatively simple rules due to the interaction of a large number of components [15]. Starting from the microscopic dynamics, kinetic models can be derived with the tools of classical kinetic theory of fluids [7], [16], [17], [10], [18], [12], [19], [20], [21], [22], [23] and [24]. In contrast with microscopic dynamics, where behavior often can be studied only empirically through computer simulations, kinetic models based on PDEs allow us to derive analytically general information on the model and its asymptotic behavior. In this paper we introduce a simple Boltzmann-like model for a speculative market characterized by a single stock and a socio-economical interplay between two different types of traders, chartists and fundamentalists. The model is strictly related to the microscopic Lux–Marchesi model [3] and [25] and to kinetic models of opinion formation recently introduced in Ref. [26]. In addition, we take into account some psychological and behavioral components of the agents, like the way they interact with each other and perceive the risk, which may produce nonrational behaviors. This is done by means of a suitable “value function” in agreement with the Prospect Theory by Kahneman and Tversky [27] and [28]. As we will show people systematically overreacting produces substantial instabilities in the stock market. In an earlier paper [16] a similar approach has been used considering a single population of investors interacting in the stock market on the basis of the microscopic Levy–Levy–Solomon model [13]. The emergence of a lognormal behavior for the wealth distribution of the agents has been shown. Though the theoretical set-up of the analysis is close in certain respects to that of [16], the structure of the model is rather different. Namely, the description of individual behavior follows an opinion formation dynamics strictly connected with the price trend. In this way, the heterogeneity among agents as well as their social interactions will be taken into account both of which are key elements affecting the outcome of the overall market dynamics. Following the analysis developed in Refs. [17] and [26], we shall prove that the Boltzmann model converges in a suitable asymptotic limit toward convection–diffusion equations of Fokker–Planck type. Other Fokker–Planck equations were obtained using different approaches in Refs. [7], [29] and [30]. This permits to study the asymptotic behavior of the investments and the price distributions and to characterize the regimes of lognormal behavior and the ones with power law tails. The main finding of the present paper is that the presence of heterogeneous strategies, both fundamentalists and chartists, is essential to achieve basic stylized facts like the presence of fat tails. The rest of the paper is organized as follows. In Section 2 we introduce the Boltzmann kinetic model for the interacting chartists and the price evolution. Details of the strategy exchange between chartists and fundamentalists are also presented here. A characterization of the admissible equilibrium states of the resulting system is then reported. Next, in Section 3, with the aim to study the asymptotic behavior of the chartists and price distributions, we introduce simpler Fokker–Planck approximations of the Boltzmann system and give explicit expressions of the long time behavior. The mathematical details of the derivation of such Fokker–Planck models are reported in separate appendices at the end of the manuscript. Numerical results which confirm the theoretical analysis are given in Section 4 and some concluding remarks are discussed in the last section.

We derived an interacting agent’s kinetic model for a simple stock market characterized by two different market strategies, chartists and fundamentalists. The kinetic system couples a description for the propensity to invest of chartists and the price formation mechanism. The model is able to describe several market phenomena like the presence of booms, crashes, and cyclic oscillations of the market price. The equilibrium behavior has been studied in a suitable asymptotic regime which originates a system of Fokker–Planck equation for the chartist’s opinion dynamics and the price formation. We found that in a system of agents acting only using a chartist strategy the distribution of price converges toward a lognormal distribution. This is in good agreement with what that found previously in Ref. [16] and observed in Ref. [2]. When a second strategy based on a fundamentalist approach is introduced in the model the prices distribution displays Pareto power law tails, which is in accordance to what is observed in the real market data. In the description of the chartist behavior we also introduced a value function which takes into account the effect of some psychological factors in the opinion formation dynamics. The main effect is to introduce market instabilities and to reduce the number of stable equilibrium configurations of the system. Let us finally conclude by observing that in principle several generalizations are possible. We mention here the possibility to include multiple interacting strategies and/or the influence of the wealth as an independent variable in the market dynamics.