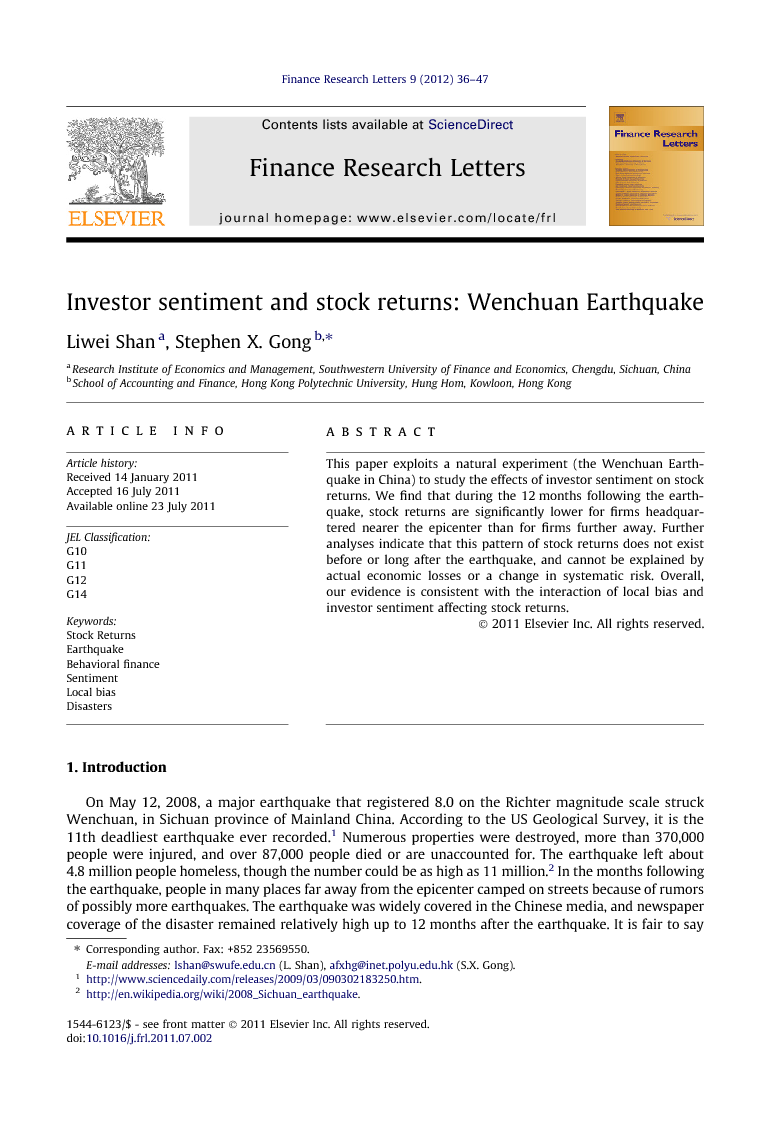 This paper exploits a natural experiment (the Wenchuan Earthquake in China) to study the effects of investor sentiment on stock returns. We find that during the 12 months following the earthquake, stock returns are significantly lower for firms headquartered nearer the epicenter than for firms further away. Further analyses indicate that this pattern of stock returns does not exist before or long after the earthquake, and cannot be explained by actual economic losses or a change in systematic risk. Overall, our evidence is consistent with the interaction of local bias and investor sentiment affecting stock returns.

On May 12, 2008, a major earthquake that registered 8.0 on the Richter magnitude scale struck Wenchuan, in Sichuan province of Mainland China. According to the US Geological Survey, it is the 11th deadliest earthquake ever recorded.1 Numerous properties were destroyed, more than 370,000 people were injured, and over 87,000 people died or are unaccounted for. The earthquake left about 4.8 million people homeless, though the number could be as high as 11 million.2 In the months following the earthquake, people in many places far away from the epicenter camped on streets because of rumors of possibly more earthquakes. The earthquake was widely covered in the Chinese media, and newspaper coverage of the disaster remained relatively high up to 12 months after the earthquake. It is fair to say that the Wenchuan Earthquake created a level of anxiety and fear in Mainland China so strong and so widespread that is incomparable to any natural disasters the country experienced in the past 30 years. This paper exploits the natural experiment provided by the Wenchuan Earthquake and examines whether negative emotions such as anxieties and fear affect stock returns. One of the differentiating points of this paper is that we exploit the possible interaction of sentiment and local bias in a natural experiment. Specifically, we measure investor sentiment using distance to the epicenter. Such an empirical proxy is based on the literature that investors prefer to invest in firms located closer to them (Coval and Moskowitz, 2001; Grinblatt and Keloharju, 2001 and Ivkovic and Weisbenner, 2004), and on the literature that people are more strongly affected emotionally by disasters occurring nearer to where they live (Schlenger et al., 2002, Silver et al., 2002 and Kaplanski and Levy, 2010). We find that firms headquartered nearer the epicenter had lower returns in the 12 months following the earthquake (2008.6–2009.5). After controlling for known risk factors, firms headquartered within a 500-km radius of the epicenter had significantly negative stock returns averaging over −3% per month. As the distance from the epicenter increases, negative stock returns gradually disappear. If China allowed short-selling, a trading strategy of shorting stocks headquartered within 250 km of the epicenter and buying stocks headquartered more than 1500 km from the epicenter would generate an average monthly return of 3% net of fees and taxes. In robustness checks, we find that firms headquartered nearer the epicenter do not have lower profitability or lower cash flows in the year of the earthquake. Further, we find no evidence of a return-distance relationship up to 36 months before the earthquake. Finally, we find no evidence that the positive relationship between stock returns and distance to the epicenter can be explained by systematic risk changes. We contribute to the literature in two major ways. First, we provide evidence through a natural experiment that a large-scale natural disaster can affect investor sentiment and hence stock returns. Second, we provide evidence that the magnitude of negative stock returns is greater for firms located nearer the place of the disaster. Overall our evidence is consistent with the notion that investors located nearer the disaster experience more negative shocks to sentiment, and that investors exhibit local bias in their investment decisions.

We find that in the 12 months following the Wenchuan Earthquake, stock returns are significantly lower for Chinese-listed firms headquartered nearer the epicenter than for firms further away. We investigate several possible explanations for this finding. The results are not consistent with the notion that firms nearer the epicenter suffer greater economic damages due to the earthquake. The results also do not support the hypothesis that the return-distance anomaly exists before, or long after, the earthquake. In addition, we find no evidence suggesting that systematic risk decreases more for firms headquartered nearer the epicenter than for firms further away. Finally, our results, based on the interaction of firm size and distance, provide some support for a sentiment-based explanation. Overall, our findings are consistent with behavioral finance theories that relate stock returns to investor sentiment and local bias. However, our data do not allow us to definitively rule out all risk-based explanations. Future research may develop more definitive tests.