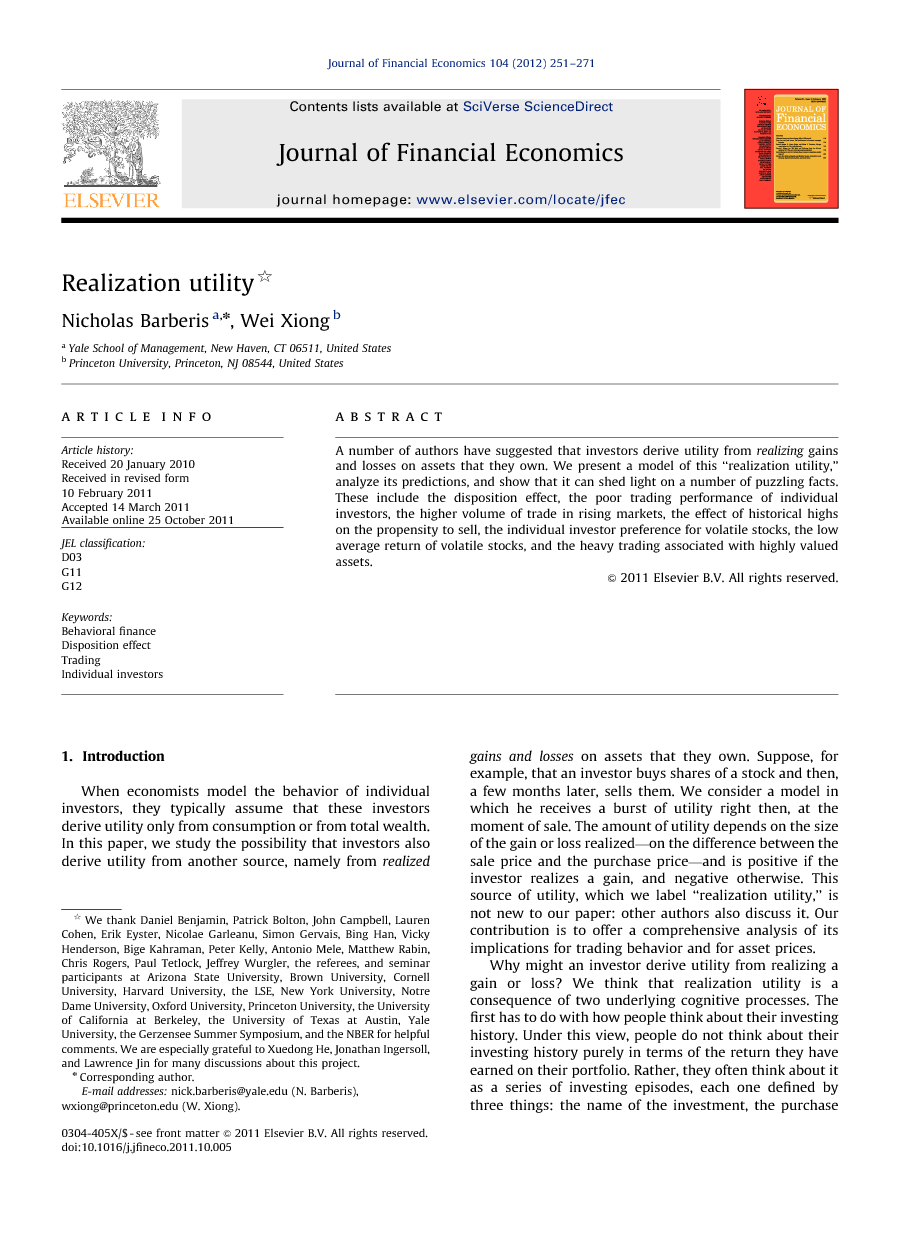 A number of authors have suggested that investors derive utility from realizing gains and losses on assets that they own. We present a model of this “realization utility,” analyze its predictions, and show that it can shed light on a number of puzzling facts. These include the disposition effect, the poor trading performance of individual investors, the higher volume of trade in rising markets, the effect of historical highs on the propensity to sell, the individual investor preference for volatile stocks, the low average return of volatile stocks, and the heavy trading associated with highly valued assets.

A number of authors have suggested that investors derive utility from realizing gains and losses. We present a model of this “realization utility,” study its predictions, and show that it can shed light on a number of puzzling facts. There are several possible directions for future research. First, while many of our model's implications match the observed facts, some do not. For example, our model predicts too strong a disposition effect: in our framework, investors never voluntarily sell stocks at a loss, while, in reality, they clearly do. It would be useful to see whether an extension of our model—one that modifies our preference specification in some way, or that allows for richer beliefs about expected stock returns—can make more accurate predictions.17 Another natural research direction involves testing the implications of realization utility. To do this, we can use field data on investor trading behavior; or experimental data, as in Weber and Camerer (1998). Another type of data that has recently become available is neural data. For example, Frydman, Barberis, Camerer, Bossaerts, and Rangel (2011) use functional magnetic resonance imaging (fMRI) technology to monitor the brain activity of 28 subjects while they trade stocks in an experimental market. The authors use the neural data to test some theories of investor behavior, including the one presented in this paper. Finally, it would be useful to think about other applications of realization utility. These applications may again concern the trading and pricing of financial securities, or they may be drawn from quite different areas of study. After all, the core idea that, in our view, underlies realization utility—that people break their experiences down into episodes and receive a burst of utility when an episode comes to an end—strikes us as one that may be relevant in many contexts, not just the financial market context that we have focused on in this paper.