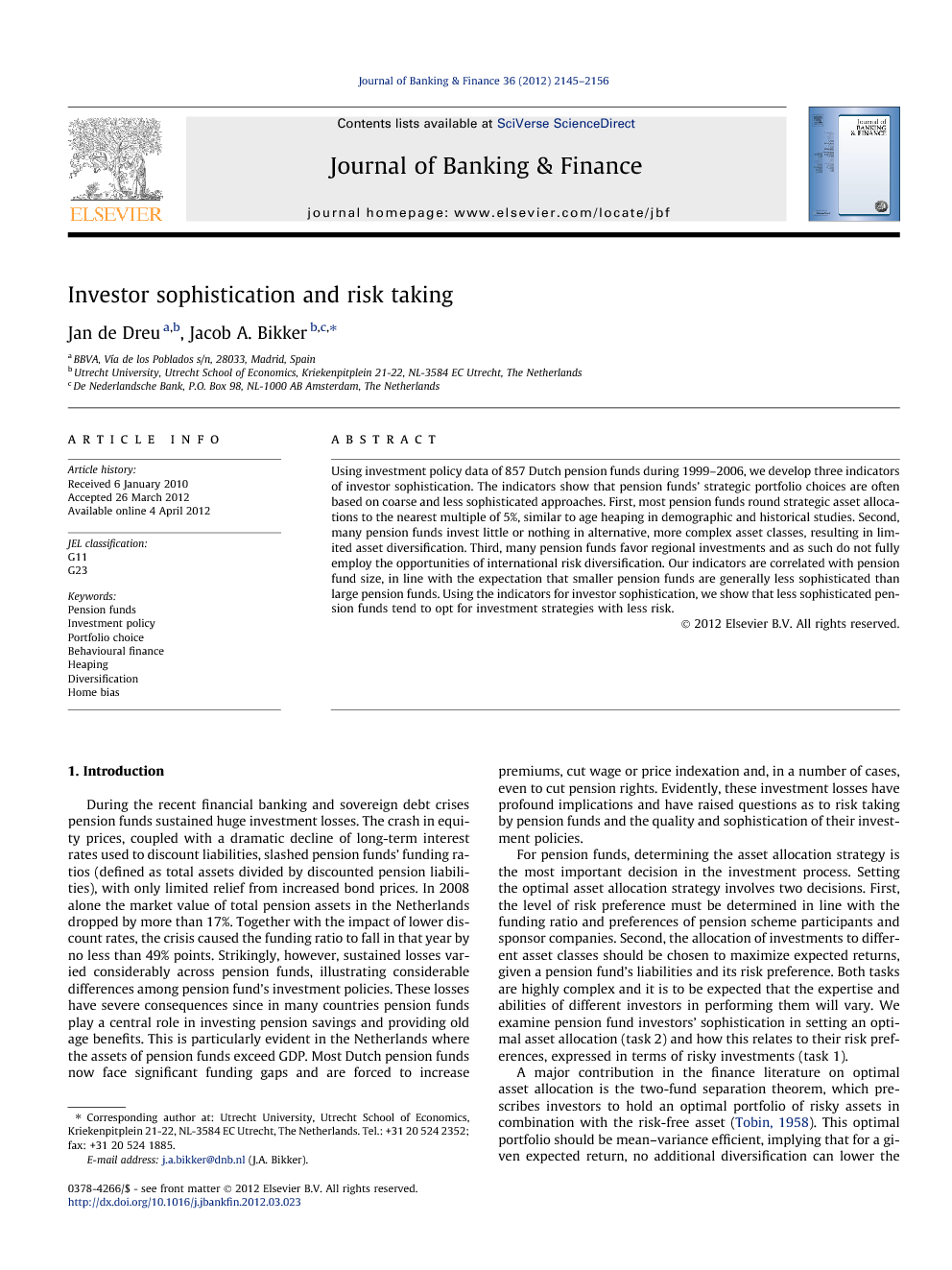 We examine the impact of investor sophistication on risk taking. We focus on pension funds since their size and other characteristics vary widely and comprehensive data is available. To measure investor sophistication, we construct three measures of the sophistication of pension funds’ investment policies. The first indicator gauges the use of attractive, but imprecise, numbers for the strategic allocation of assets to both equities and bonds. Most pension funds in the Netherlands apply such rule of thumb, using particularly multiples of 5%. This supports the observation that in current practice, asset allocation does not follow directly from optimization of ALM models. Rather, it is determined by human judgment, given results from ALM studies. The second indicator is the use of alternative, complex investments other than equities and bonds, as an instrument to diversify the investment portfolio. We observe that many pension funds invest little in alternative, more complex asset classes, suggesting suboptimal portfolio diversification. The third indicator is home bias in the equity investment portfolio. We show large differences in terms of relative investments in the euro area, suggesting suboptimal international diversification in many pension funds. We find that these three measures correlate with pension fund size indicating that smaller pension funds tend to be less sophisticated than larger ones. Nevertheless, investment sophistication contributes independently to the explanation of risk aversion, showing that investment expertise also varies among pension funds in the same size class. These results suggest that the asset allocation policies of many pension funds, particularly small ones, are suboptimal. A notable finding is the huge variation in asset allocation practices across pension funds, in a broader context also referred to as the asset allocation puzzle. Part of this variation can be explained by the pension fund’s size, its type of pension plan, its preference indicators, such as assets per participant, participant age distribution and the funding ratio and, finally, its governance type. In addition, we find that all our indicators of investor sophistication are highly statistically significant. Even when controlling for size, sophistication and other fund-specific variables, pension funds make significantly diverging portfolio choices. We believe that this reflects widely varying views regarding the optimal investment mix. It seems likely that differences in risk-return assumptions for the various asset classes, in the level of expertise of pension fund investment managers and in personal preferences of pension boards also play an important role. The analysis of this latter phenomenon is outside the scope of this article, but is suggested as an interesting topic for future research. Our findings suggest that further consolidation of the Dutch pension sector, by mergers or increased cooperation (e.g. in so-called general pension institutions, which can administer pensions plans for several companies or industries) may contribute to improve the sophistication of pension funds’ investment policies. Such benefits of consolidation are in line with previous studies, in which we find a negative correlation between the size of pension funds and the administrative and investment costs per participant ( Bikker and de Dreu, 2009 and Bikker et al., forthcoming-b).