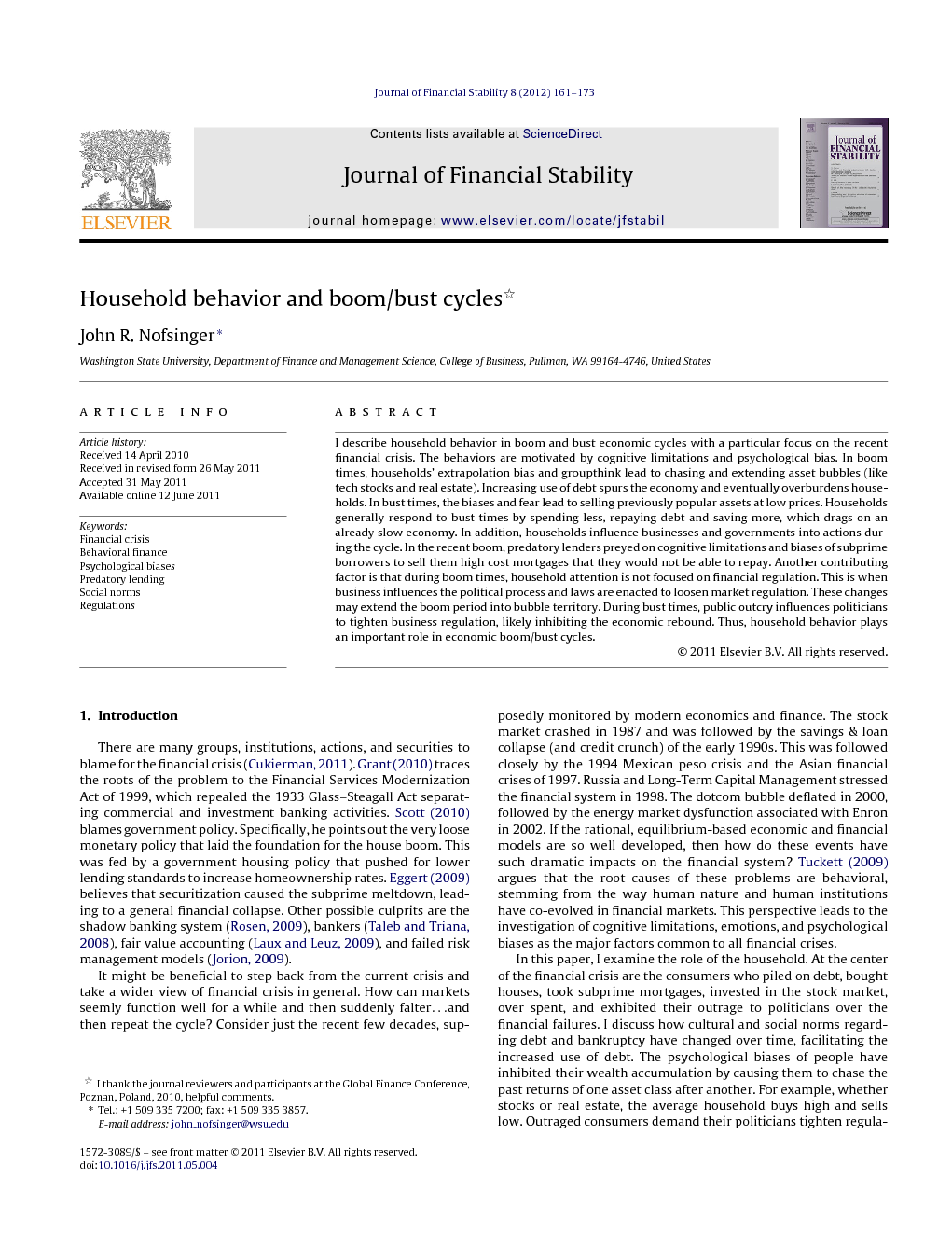 I describe household behavior in boom and bust economic cycles with a particular focus on the recent financial crisis. The behaviors are motivated by cognitive limitations and psychological bias. In boom times, households’ extrapolation bias and groupthink lead to chasing and extending asset bubbles (like tech stocks and real estate). Increasing use of debt spurs the economy and eventually overburdens households. In bust times, the biases and fear lead to selling previously popular assets at low prices. Households generally respond to bust times by spending less, repaying debt and saving more, which drags on an already slow economy. In addition, households influence businesses and governments into actions during the cycle. In the recent boom, predatory lenders preyed on cognitive limitations and biases of subprime borrowers to sell them high cost mortgages that they would not be able to repay. Another contributing factor is that during boom times, household attention is not focused on financial regulation. This is when business influences the political process and laws are enacted to loosen market regulation. These changes may extend the boom period into bubble territory. During bust times, public outcry influences politicians to tighten business regulation, likely inhibiting the economic rebound. Thus, household behavior plays an important role in economic boom/bust cycles.

I argue that the emotions and psychological biases of households play an important role in the boom/bust economic cycle. The recent financial crisis is a case in point. During the run up of a bubble period, household behavior is biased toward exacerbating the bubble, not subduing it. For example, households’ chase the high performing asset class to the point that they think in terms of trading instead of investing. This pushes the asset past fundamental value. In addition to this shifting of portfolio allocations toward risky assets, some households also increase risk through the use of financial leverage. The increase in debt load and decrease in savings rate over the past two decades spurred economic growth. Households have limited attention. During these expansion periods, household attention is not focused on financial regulation. This is when business influences the legislative process and laws are enacted to loosen market regulation. These changes may extend and overheat the boom period through business excesses. These regulatory changes can also spur predatory practices against households. For example, some lenders preyed on the cognitive limitations and biases of subprime borrowers to sell them high cost mortgages that they would not be able to repay. Both households’ own behavior and the behavior they induce in others drive economic expansions into bubble economies. At the peak of the boom, households have bought assets at high prices, overburdened themselves with debt, and reduced their savings rate. In bust times, the household biases and fear lead to selling previously popular assets at low prices. The social norms regarding bankruptcy change to reduce the stigma of default. Households then repay debt and save more, which drags on an already slow economy. Upset by their predicament, they seek scapegoats and discover the excesses of various capitalists. Public outrage influences politicians to tighten business regulation. Biased politicians may enact legislation that fails to fix the problems, but does make their constituents feel good. Over regulation may occur that burdens companies and likely inhibits the economic rebound. Households increase speculative behavior late in an economic expansion and restrict economic behavior in a contraction. This cycle works against the typical Federal Reserve actions. The Fed tries to slow expansion by tightening monetary policy as an economy heats up and loosens it during a recession. Thus, household behavior has an important role in economic boom/bust cycles.