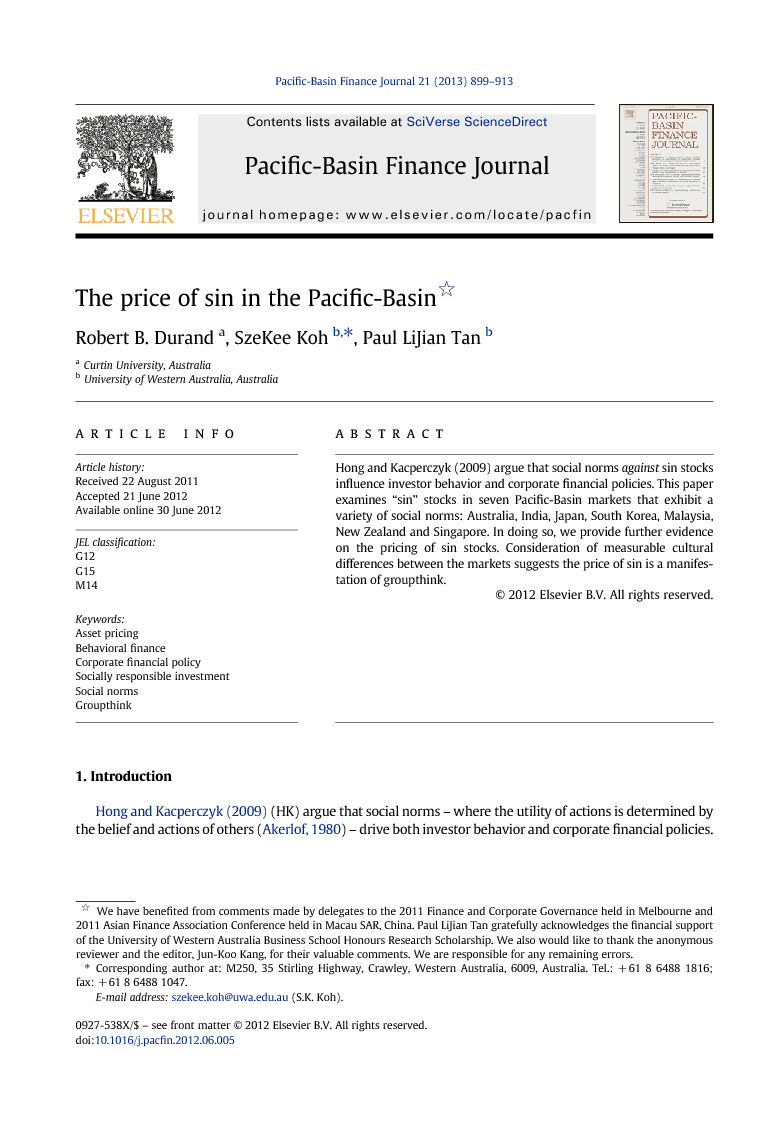 Hong and Kacperczyk (2009) argue that social norms against sin stocks influence investor behavior and corporate financial policies. This paper examines “sin” stocks in seven Pacific-Basin markets that exhibit a variety of social norms: Australia, India, Japan, South Korea, Malaysia, New Zealand and Singapore. In doing so, we provide further evidence on the pricing of sin stocks. Consideration of measurable cultural differences between the markets suggests the price of sin is a manifestation of groupthink.

HK's analysis of the US market is consistent with their argument that social norms drive investors toward certain courses of action. They find that “norm-constrained” institutions have lower holdings of sin stocks. HK also find that sin stocks are relatively undervalued but that they have higher returns ceteris paribus. We follow HK and examine sin stocks in seven Pacific-Basin markets: Australia, India, Japan, South Korea, Malaysia, New Zealand and Singapore. In Australia and New Zealand, the countries which are culturally closest to the US, we find that substantial shareholders are less likely to hold sin stocks; such a finding is consistent with HK's social norms hypothesis. In Japan and South Korea, we find that substantial shareholders are more likely to hold sin stocks. In the other markets we find that there is no difference in substantial shareholdings of sin stocks. Our study finds that sin stocks generate negative risk-adjusted returns in each of the seven Pacific-Basin markets we analyze. In motivating our analysis in Fig. 1, we used two cultural dimensions – individualism and corruption – to suggest that the seven markets we have studied have cultural similarities, as well as contrasts, to the US. Where relevant, we have presented figures which suggest that estimates for SINDUM (the dummy variable used to identify sin stocks) are related to one of these cultural variables, individualism. In Fig. 2, the scatter plot suggests that as cultures become more collectivist (less individualistic), substantial shareholding is more likely to be present in sin stocks. In Fig. 3, the scatter plot suggests that, as cultures become more collectivist, sin stocks are likely to underperform other stocks. In Fig. 4, the scatter plot suggests that, as cultures become more collectivist, sin stocks are likely to be overvalued (that is, investors pay more for them in comparison with other stocks). Fig. 2, Fig. 3 and Fig. 4 suggest that less individualistic investors herd toward sin stocks. In America, and, to some extent, Australia and New Zealand, more individualistic investors might herd away from sin stocks. Investors, being individualistic, take responsibility for their actions and believe they can influence the world. Collectivist investors, on the other hand, appear to herd toward sin stocks; different social norms appear to apply. It may be the case that, in collectivist cultures, the cognitive dissonance that may result from holding sin stocks is reduced by others holding sin stocks. It may also be that, in collectivist cultures, official sanction, such as Japanese government entities holding statistically significantly greater proportions of sin stocks (and, in other countries with low individualism, government entities not treating sin stocks differently) facilitates the good feelings about the firms that allow members in the group to avoid the inconvenient truth of sin companies.