عنوان انگلیسی
An examination of the relationship between the disposition effect and gender, age, the traded security, and bull–bear market conditions
دانلود فوری مقاله + سفارش ترجمه 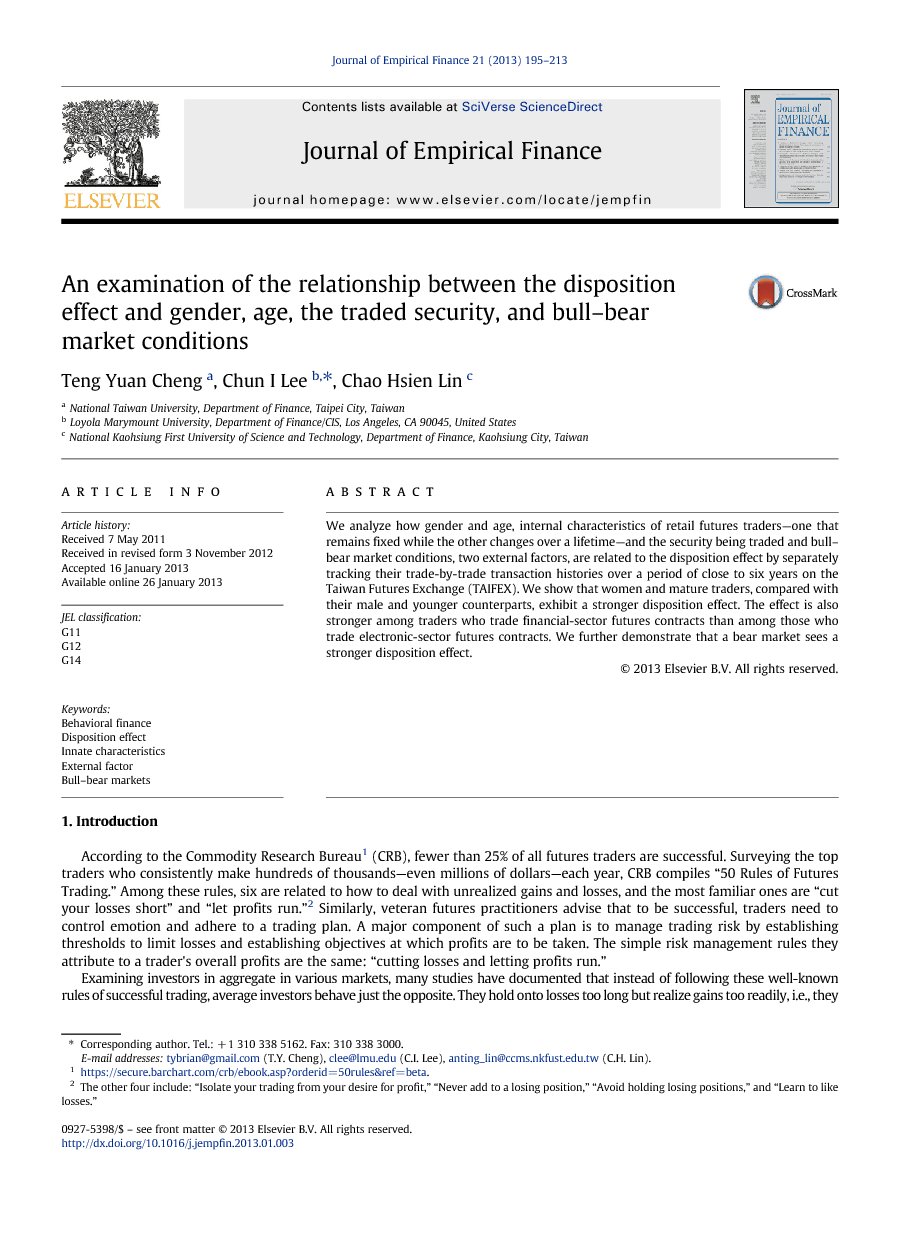 We analyze how gender and age, internal characteristics of retail futures traders—one that remains fixed while the other changes over a lifetime—and the security being traded and bull–bear market conditions, two external factors, are related to the disposition effect by separately tracking their trade-by-trade transaction histories over a period of close to six years on the Taiwan Futures Exchange (TAIFEX). We show that women and mature traders, compared with their male and younger counterparts, exhibit a stronger disposition effect. The effect is also stronger among traders who trade financial-sector futures contracts than among those who trade electronic-sector futures contracts. We further demonstrate that a bear market sees a stronger disposition effect.

Motivated by the rules of trading advocated by successful futures traders, this paper examines and shows that while aggregate retail traders on the TAIFEX exhibit the disposition effect, there exist great variations among the traders. We demonstrate that these variations are related to a trader's trading volume and tenure. Building on these results, our main objective is to investigate whether and how innate characteristics of traders, such as gender and age, as well as external factors, the security traded and bull–bear market conditions, offer additional explanatory power to the variations in the disposition effect. The results show that indeed both internal and external factors are statistically and significantly linked to the disposition effect. The contribution of these new results to the behavioral finance literature is analogous to the contribution of studies that add to the nature-versus-nurture debate in development psychology. Just as many of those studies demonstrate that both nature and nurture matter in the development of a person, we show that both internal and external factors are related to investor behavior. Reflecting on the individual result for each of these factors, we first see that the finding of women exhibiting a stronger disposition effect suggests that women are more loss averse, consistent with the related literature in sociology, psychology, and experimental economics that women are more risk averse than men. It also adds to the common finding in investment decision-making and trading that men take more risk and trade more actively. Second, the result that mature traders display a stronger disposition effect adds new evidence to the extant conflicting results on the relationship between age and the disposition effect. The fact that Dhar and Zhu (2006) and Korniotis and Kumar (2011) use the same brokerage dataset employed in Barber and Odean (2001) suggests that the unique characteristics of their data might have something to do with the same conclusion they draw that older investors exhibit weaker disposition effect. Carefully poring through the statistics reported in Barber and Odean (2001) and Dhar and Zhu (2006), it appears to us that their data are dominated by men, at a ratio of 3.7 men to one woman, and that, with an average (median) age of 50 (48), their samples are composed of investors much older than the population. Furthermore, their older investors, especially those above the 75th percentile, report a much higher net worth. Based on Dhar and Zhu's own argument, these older investors are more sophisticated because of their higher net worth. With a sample over-represented by men, but not accounted for, and older investors who are sophisticated, a result of older investors exhibiting weaker disposition effect seems very plausible. Since our sample includes all individual future traders in a country, they represent very well the whole spectrum of the retail investors, rendering our results more generalizable. By incorporating both gender and age in our analysis, we avoid the problem that the result on age might be caused by the unaccounted impact of gender. As an exploratory investigation, we apply the methods used in both Dhar and Zhu (2006) and Korniotis and Kumar (2011) to the subsamples of our traders but fail to produce their result of older investors exhibiting a weaker disposition effect. Clearly, to fully address the conflicting results is beyond the scope of this study. It is, therefore, incumbent upon future studies to examine in more detail this data issue, the differences between equity and futures securities — especially regarding the issue of daily settlement of the latter, and the related complexity involving different methodologies. Third, the finding that the security being traded, a trading microstructure factor, is shown to be related to the disposition effect adds to the evidence that microstructure matters. In this case, traders of different risk tolerance levels are attracted to different products and through the trading of these different products their varying extents of the disposition effect are revealed. Finally, by demonstrating that a bear market sees a stronger disposition effect we add additional evidence to the literature that market conditions affect investor behavior.