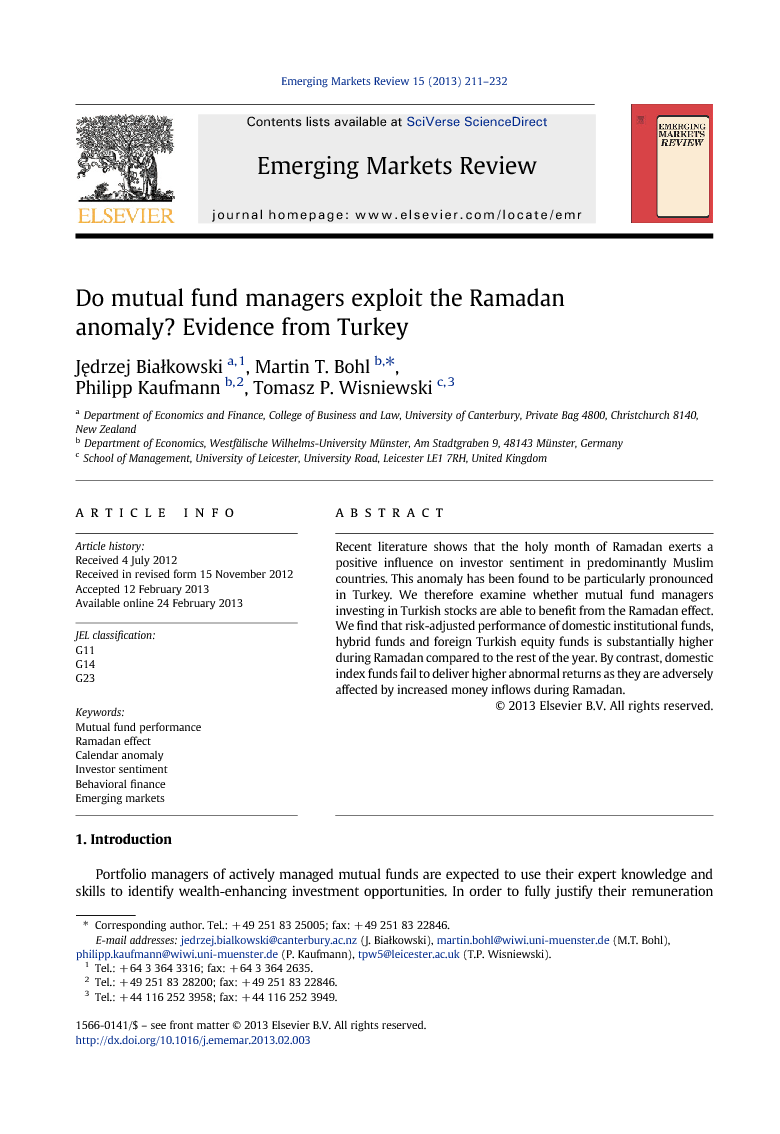 Recent literature shows that the holy month of Ramadan exerts a positive influence on investor sentiment in predominantly Muslim countries. This anomaly has been found to be particularly pronounced in Turkey. We therefore examine whether mutual fund managers investing in Turkish stocks are able to benefit from the Ramadan effect. We find that risk-adjusted performance of domestic institutional funds, hybrid funds and foreign Turkish equity funds is substantially higher during Ramadan compared to the rest of the year. By contrast, domestic index funds fail to deliver higher abnormal returns as they are adversely affected by increased money inflows during Ramadan.

Intriguing results reported in recent literature show that the holy month of Ramadan has a strong impact on stock market returns and their volatility, particularly in countries where Muslims constitute a significant fraction of society. Ramadan is not only a religious month marked by fasting, prayer and self-reflection, but also a time in which obedient Muslims should seek to improve their human relationships. The Feast of Ramadan celebrated at the end of the fasting period further strengthens family ties and promotes feelings of solidarity and social identity. The positive psychological effects that these religious rituals have on the general public lead to optimistic beliefs as well as improved investor sentiment. Consistent with this notion, we confirm the results of previous studies and document higher returns during Ramadan for the Istanbul Stock Exchange, which is the second largest stock market in the Middle East in terms of market capitalization after the Tadawul in Saudi Arabia. However, the effect has gradually decreased over recent years, reflecting both investors' awareness of the anomaly and an increasing integration of the Turkish stock market into the global financial landscape. In terms of volatility, the impact of Ramadan has reversed over time from a heightening to a dampening influence on stock price fluctuations. As prior research shows that the Ramadan effect has been particularly evident in Turkey, we investigate whether mutual fund managers investing in the Istanbul stock market are able to benefit from the calendar anomaly. Our main findings suggest that fund managers and investors alike have discovered the profit opportunities during Ramadan and the days subsequent to the month of fasting. First, we show that domestic institutional funds and larger domestic hybrid funds earn positive and significant risk-adjusted returns during Ramadan over the 2000 to 2011 period, while their risk-adjusted performance throughout the rest of the year is insignificant. For other domestic fund groups the abnormal returns are less pronounced, albeit economically relevant. However, it remains a subject for future research whether all mutual fund managers engage in deliberate market timing and do not just follow the herd during the Ramadan market rally. On the one hand, we can rule out the possibility that mutual funds simply earn higher abnormal returns during Ramadan because they pursue a momentum strategy. We control for this effect by using the Carhart (1997) four-factor model and allowing for differing factor exposures during Ramadan and the non-Ramadan period. Our results even indicate that domestic fund managers tend to follow a moderate contrarian strategy. On the other hand, the positive abnormal performance could be the result of overweighting certain sectors compared to the aggregate market portfolio. Some sectors might be more positively affected by Ramadan than others. If a fund manager assigns a higher portfolio weight to these more promising sectors than they actually possess in the market, the sector allocation will contribute positively to the mutual fund's alpha. Note that such an investment decision is also attributed to the fund manager's selection ability. Foreign equity funds investing in the Turkish stock market also deliver risk-adjusted returns during Ramadan that are more than three times larger than during the other months. This result suggests that euro-based investors can benefit from the anomaly by buying fund shares in advance of the Muslim holy month, or alternatively, by delaying already planned sales until after the Feast of Ramadan. Surprisingly, domestic index funds constitute the only fund group that yields negative risk-adjusted returns during the Muslim holy month. The reason for this seemingly inferior performance lies primarily in increased money inflows. Apparently, individual investors try to jump on the bandwagon through purchasing passive index funds, which exhibit the highest equity exposure and are thus more likely to benefit from the Ramadan anomaly. These speculative attempts are not entirely in vain since index funds earn the largest average raw returns of all domestic mutual fund groups during Ramadan. However, local index fund managers seem to have difficulty in converting the new cash inflows into profitable investments in a timely manner.