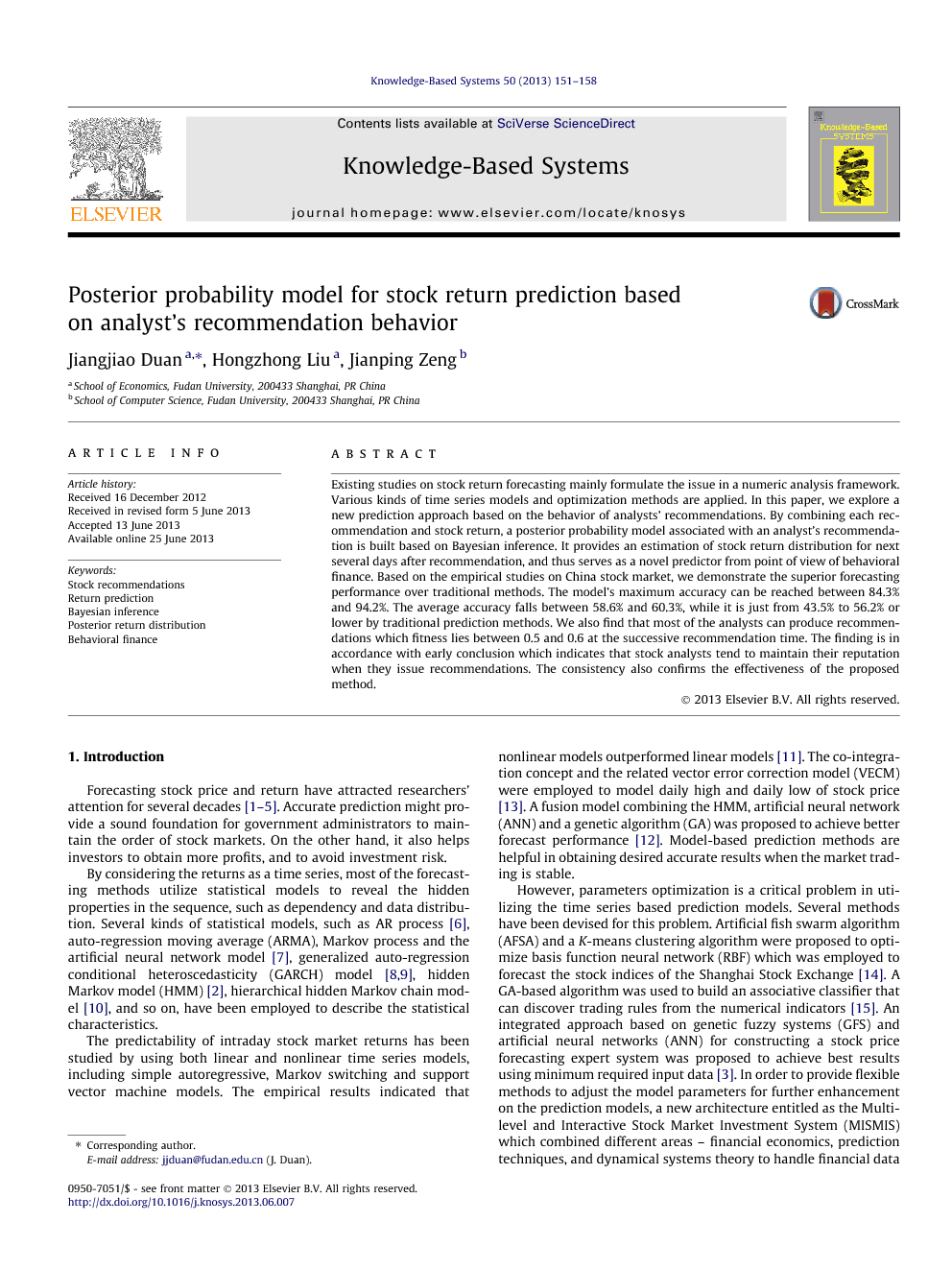 Existing studies on stock return forecasting mainly formulate the issue in a numeric analysis framework. Various kinds of time series models and optimization methods are applied. In this paper, we explore a new prediction approach based on the behavior of analysts’ recommendations. By combining each recommendation and stock return, a posterior probability model associated with an analyst’s recommendation is built based on Bayesian inference. It provides an estimation of stock return distribution for next several days after recommendation, and thus serves as a novel predictor from point of view of behavioral finance. Based on the empirical studies on China stock market, we demonstrate the superior forecasting performance over traditional methods. The model’s maximum accuracy can be reached between 84.3% and 94.2%. The average accuracy falls between 58.6% and 60.3%, while it is just from 43.5% to 56.2% or lower by traditional prediction methods. We also find that most of the analysts can produce recommendations which fitness lies between 0.5 and 0.6 at the successive recommendation time. The finding is in accordance with early conclusion which indicates that stock analysts tend to maintain their reputation when they issue recommendations. The consistency also confirms the effectiveness of the proposed method.

Forecasting stock return has attracted much attention of researchers from different backgrounds, such as academic researchers, policy makers and practitioners. A new model that incorporates Bayesian theory and analyst’s behavior is proposed. By combining the history data of recommendations and stock return, posterior return distribution is established and utilized as the estimation of return distribution for next few days after recommendation. Based on the empirical studies on China stock analysts whose recommendation number is above 300 within two years, the maximum accuracy between 84.3% and 94.2% can be achieved, and the average accuracy falls between 58.6% and 60.3%, while it is just from 43.5% to 56.2% for hidden Markov-based method, and even lower for ANN-based method. The comparison results demonstrate the superior forecasting performance over state of the art models based on numeric analysis framework. The ability in persistence of prediction is in accordance with early research on stock analysts in maintaining their reputation. The result also confirms the effectiveness of the proposed method. Furthermore, stability and persistence of the predictor are also investigated with two important factors (TL and DRR) that have effect on the model. It is shown that the two factors should be taken into consideration simultaneously in order to achieve the best fitness and avoid uncertainty of recommendation behavior. On the other hand, being lack of sufficient recommendation data, the prediction model tend to become unstable when the model is trained using the analyst’s behavior whose recommendation number is below 300. Future work can be concentrated on improvement of the predictor which can incorporate several analysts’ recommendations, and distribute weights to the analysts. On the other hand, new prediction method that integrates the proposed model with current methods, such as time series analysis techniques and fuzzy AI techniques [31], can be developed to enhance the prediction performance.