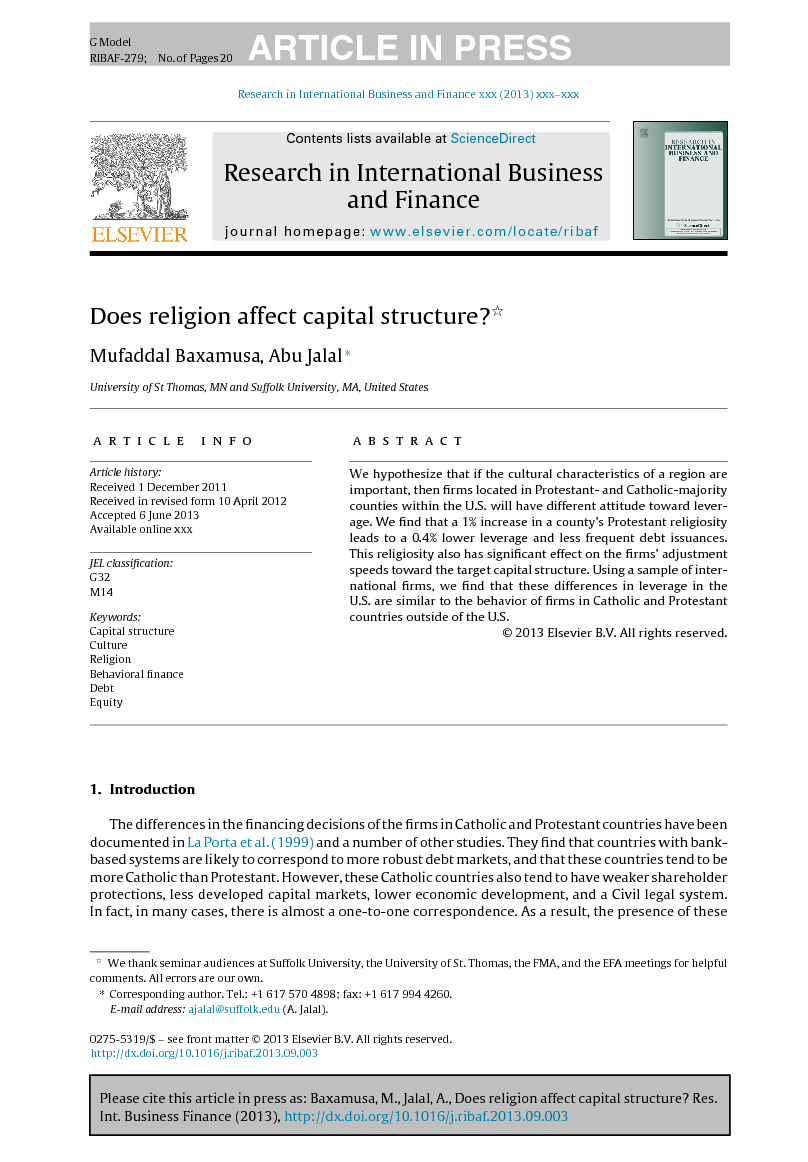 We hypothesize that if the cultural characteristics of a region are important, then firms located in Protestant- and Catholic-majority counties within the U.S. will have different attitude toward leverage. We find that a 1% increase in a county's Protestant religiosity leads to a 0.4% lower leverage and less frequent debt issuances. This religiosity also has significant effect on the firms’ adjustment speeds toward the target capital structure. Using a sample of international firms, we find that these differences in leverage in the U.S. are similar to the behavior of firms in Catholic and Protestant countries outside of the U.S.

The differences in the financing decisions of the firms in Catholic and Protestant countries have been documented in La Porta et al. (1999) and a number of other studies. They find that countries with bank-based systems are likely to correspond to more robust debt markets, and that these countries tend to be more Catholic than Protestant. However, these Catholic countries also tend to have weaker shareholder protections, less developed capital markets, lower economic development, and a Civil legal system. In fact, in many cases, there is almost a one-to-one correspondence. As a result, the presence of these additional factors makes it impossible to properly study whether there is a link between religion and debt using cross-country data. To avoid the impact of these factors, we empirically test this relationship by focusing on the different religious environments within a single country, the U.S. While the U.S. is a Protestant-majority country, it was settled by immigrants and has a robust representation of different religious communities clustered in various areas. Furthermore, this country is based on a Common law system and considered to be one of the most developed market-based economies. Regardless of the location of the firms within the U.S., they all have access to similar financial and legal institutions.1 These firms also adhere to some common standards and rules written and enforced by the federal government. As a result, it would be easier for us to control for the confounding factors common in international studies and observe if there are any significant differences in the behavior of the firms on the basis of the religious characteristics of the regions where they are situated. To identify the proxies for the religiosity of the regions of the firms, we follow the empirical corporate finance literature. A number of studies, including Hilary and Hui (2009), Kuhnen and Niessen (2009), and Kumar et al. (2011), use the religiosity of the firm's location to study the decisions of the firm. Similar to Kumar et al. (2011), we disaggregate this variable and use the denominational data to identify Catholic and Protestant religiosity. We find that when Protestant religiosity of counties increases, the level of leverage for firms located in these counties declines. To control for various characteristics of the firms, we use propensity-score based matching in our regression models. This means that we compare firms belonging to two different religious environments, but they are from the same industry,2 with similar size, and operate in the same year. The results are robust to controls for various issues that differentiate the regions. It is interesting to note that unlike the Catholic countries of the world, the Catholic-majority counties within the U.S. are more economically developed. Yet the firms in these regions show similar preference for debt-financing. This implies that financial development may not be the sole driver behind this choice of debt over equity. We also find that there are significant differences in the characteristics of these debt financings. We find that an increase in the Protestant religiosity of the county where the firm is located is associated with less frequent issuance of debt. Furthermore, firms located in Protestant counties adjust toward the target leverage at a faster speed if the firm's leverage is higher than its target leverage. In contrast, firms located in Catholic counties adjust their capital structures at a faster pace if the firm's leverage ratio is lower than the target. This study has implications beyond the determinants of capital structures of firms. It is usually taken that countries can develop by introducing structural reforms to their institutions. However, this paper highlights some of the shortcoming of this approach as structural reforms may ignore the importance of culture. Specifically, we find that a firm can persistently maintain a level of leverage different from the optimum if it is influenced by a less debt-dependent culture. Our intention is not to claim that legal and institutional factor are inconsequential, but that incorporating the effects of cultural can help us develop a better understanding of some of the puzzles observed in the literature. The rest of the study is structured as follows: Section 2 develops the hypothesis. Section 3 constructs the variables from the various data sources. Section 4 tests the hypotheses linking capital structure to religion. Section 5 discusses the implications of the findings. This study concludes in Section 6.

The main objective of this study is to investigate the impact of the religious environment of the firms on their capital structures. We devise a scenario where the legal and institutional differences are at a minimum, but there are significant differences in the religious composition of the population. We compare the capital structures of firms situated in the Catholic-majority and the Protestant-majority counties within the United States and find that firms located in Catholic-majority counties have more leverage. Additionally, these firms issue more debt and less equity. We also find that firms located in the Protestant counties adjust toward their target capital structure at a faster speed if the firm's leverage is higher than the target leverage. In contrast, firms located in the Catholic counties adjust their capital structures at a faster speed if the firm's capital structure is lower than the target. These differences in leverage in the U.S. are similar to how firms in the Catholic and the Protestant countries outside of the U.S. behave. Our findings have important implications for future theoretical studies on capital structures. An enduring puzzle in financial economics is the gap between the theoretical and the observed capital structures. This issue manifests itself in the literature's rather limited ability to explain why firms have substantially different leverage than the optimal and why some firms frequently issue debt while other firms rarely do so. We propose that religious preferences can partially answer some of these questions. Future studies can explore the links between some of the other puzzles in corporate finance (such as, the lack of sensitivity of CEO's pay to performance when the firm is performing poorly, repeated negative NPV acquisitions by the some firm, etc.) and culture. Another weakness of this literature is the lack of a comprehensive model that explains the impact of culture on all major corporate decisions like diversification, executive compensation, investments, etc. These gaps in the literature are opportunities for future research.