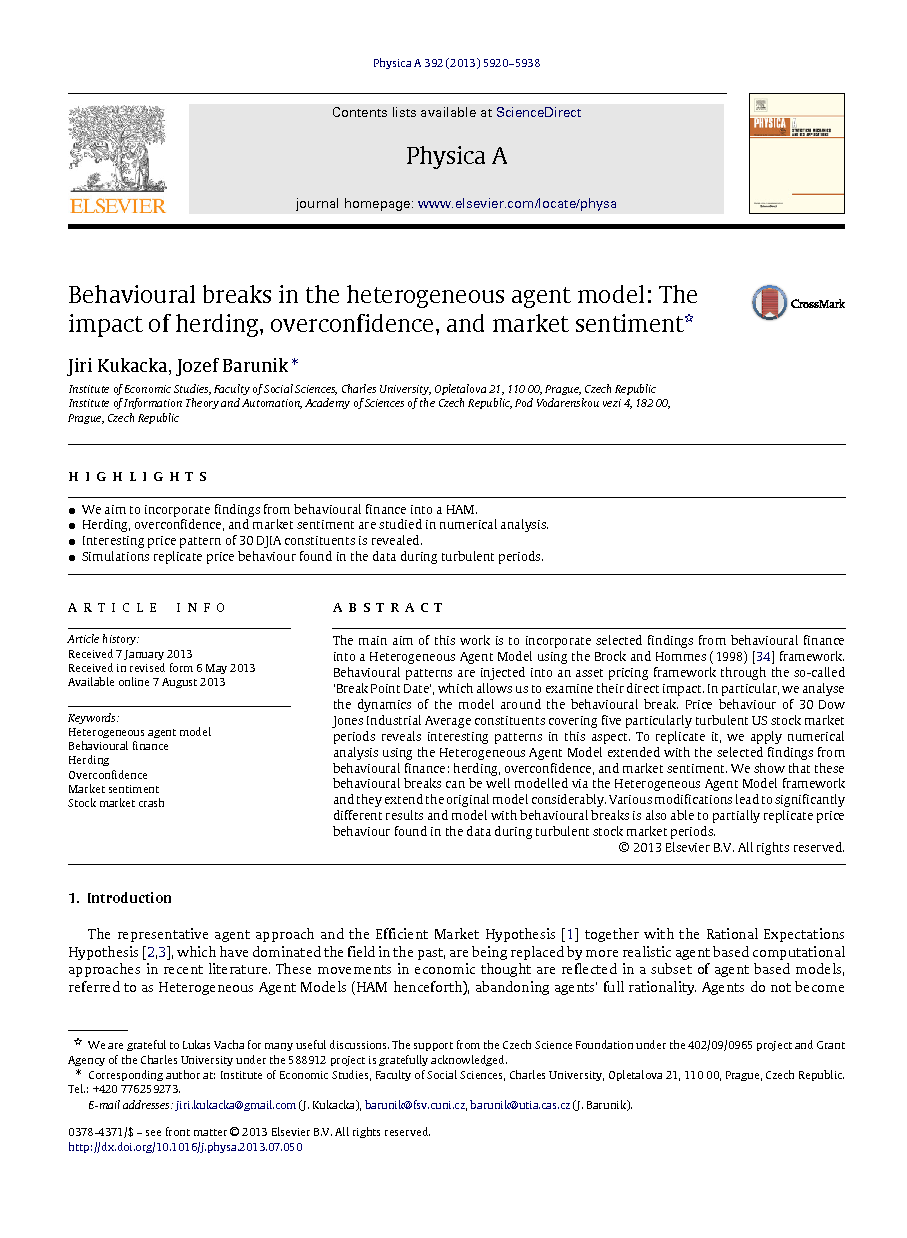 The main aim of this work is to incorporate selected findings from behavioural finance into a Heterogeneous Agent Model using the Brock and Hommes (1998) [34] framework. Behavioural patterns are injected into an asset pricing framework through the so-called ‘Break Point Date’, which allows us to examine their direct impact. In particular, we analyse the dynamics of the model around the behavioural break. Price behaviour of 30 Dow Jones Industrial Average constituents covering five particularly turbulent US stock market periods reveals interesting patterns in this aspect. To replicate it, we apply numerical analysis using the Heterogeneous Agent Model extended with the selected findings from behavioural finance: herding, overconfidence, and market sentiment. We show that these behavioural breaks can be well modelled via the Heterogeneous Agent Model framework and they extend the original model considerably. Various modifications lead to significantly different results and model with behavioural breaks is also able to partially replicate price behaviour found in the data during turbulent stock market periods.

We introduce a different perspective and application of the Brock and Hommes [34] HAM approach. From the plethora of well documented behavioural biases we examine the impact of herding, overconfidence, and market sentiment. Behavioural patterns are embedded into an asset pricing framework in order to study resulting price dynamics. As financial crises and stock market crashes can be widely considered as periods when investors’ rationality is restrained to a great extent, we advance current research literature through an empirical verification of the HAM abilities and explanatory power of behavioural finance, using data covering these periods of high-volatility. We develop a unique benchmark dataset for this purpose. The dataset consists of all currently publicly accessible individual DJIA constituents covering five particularly turbulent stock market periods. The era we consider starts with Black Monday 1987 and terminates with the Lehman Brothers bankruptcy in 2008. Most importantly, we reveal an interesting pattern among this data. When data before and after the BPD are compared, mean, variance, and skewness increase in four of five analysed periods, while kurtosis decreases in the same ratio of cases. From the theoretical point of view, we show that selected findings from behavioural finance: (i) herding, (ii) overconfidence, and (iii) market sentiment, can be well modelled via the HAM. Herding is modelled so that one of strategies copies the behaviour of the most successful traders of the previous day. Overconfidence is modelled as the overestimation of randomly generated values. Finally, we model the market sentiment as shifts of the mean values of probability distributions from which agents’ beliefs are generated. A numerical analysis of the HAM extended with the selected findings from the behavioural finance brings the most important results. We analyse the dynamics of the model around the BPD, where behavioural elements are injected into the system, and compare it to our empirical benchmark sample. By performing a large Monte Carlo study we show that findings from behavioural finance extend the original HAM considerably and different HAM modifications lead to different outcomes. Both results are statistically significant and are confirmed by the Cramér–von Mises Test. From this perspective, herding and all trend-affecting setup combinations generally seem to be the weakest modifications. On the other hand, almost all non-trend sentiment modifications exhibit excellent results. Moreover, we analyse the impact of four additional model extensions. These comprise the default presence of fundamentalists, stochastic formation of parameters, various different combinations, and memory. Generally, the first three modifications cause more or less only minor differences, while memory exhibits the most evident and statistically significant influence on the model structure. Results further indicate that HAM is able to partially replicate price behaviour during turbulent stock market periods. In particular, the market sentiment case affecting the bias parameter only exhibits a very good fit when compared to the empirical benchmark sample. When memory is added into the system, a strong impact around the BPD is observed. Memory also reinforces the ability to fit the benchmark pattern for particular setup combinations. To conclude, our approach suggests an alternative tool for examining the dynamics of changes in the HAM structure. To the best of our knowledge, this work also offers a first attempt to match the fields of HAM and behavioural finance in order to merge both approaches. We study the impact of ‘behavioural breaks’ but other phenomena such as interest rate shocks or new supplies of information might be implemented as well. As such, our work might be viewed as a step towards an intriguing extension of HAM–its empirical validation–while we show that it makes sense to consider behavioural finance within the heterogeneous agent modelling framework and that both approaches can desirably complement one another.