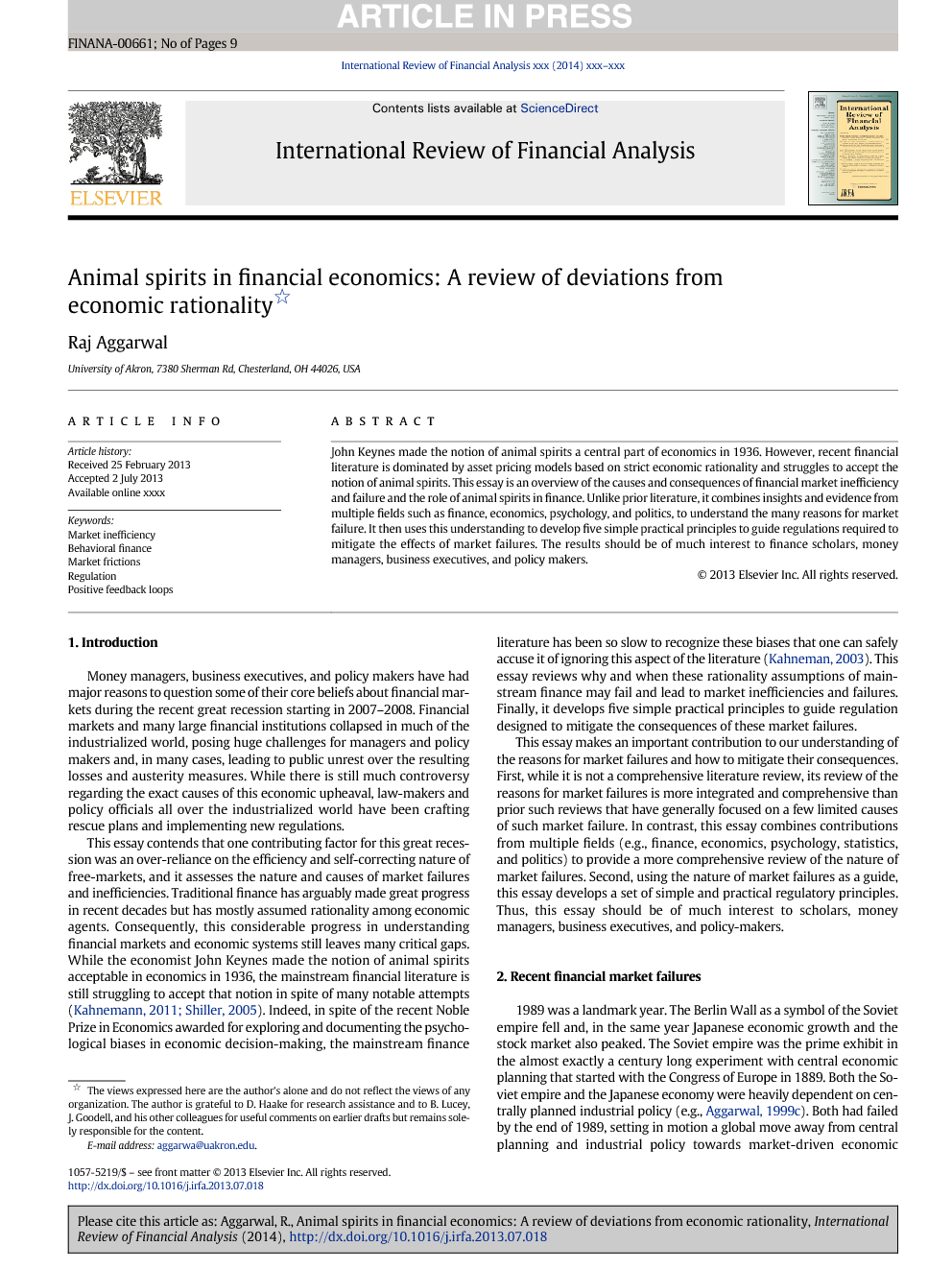 John Keynes made the notion of animal spirits a central part of economics in 1936. However, recent financial literature is dominated by asset pricing models based on strict economic rationality and struggles to accept the notion of animal spirits. This essay is an overview of the causes and consequences of financial market inefficiency and failure and the role of animal spirits in finance. Unlike prior literature, it combines insights and evidence from multiple fields such as finance, economics, psychology, and politics, to understand the many reasons for market failure. It then uses this understanding to develop five simple practical principles to guide regulations required to mitigate the effects of market failures. The results should be of much interest to finance scholars, money managers, business executives, and policy makers.

Money managers, business executives, and policy makers have had major reasons to question some of their core beliefs about financial markets during the recent great recession starting in 2007–2008. Financial markets and many large financial institutions collapsed in much of the industrialized world, posing huge challenges for managers and policy makers and, in many cases, leading to public unrest over the resulting losses and austerity measures. While there is still much controversy regarding the exact causes of this economic upheaval, law-makers and policy officials all over the industrialized world have been crafting rescue plans and implementing new regulations. This essay contends that one contributing factor for this great recession was an over-reliance on the efficiency and self-correcting nature of free-markets, and it assesses the nature and causes of market failures and inefficiencies. Traditional finance has arguably made great progress in recent decades but has mostly assumed rationality among economic agents. Consequently, this considerable progress in understanding financial markets and economic systems still leaves many critical gaps. While the economist John Keynes made the notion of animal spirits acceptable in economics in 1936, the mainstream financial literature is still struggling to accept that notion in spite of many notable attempts (Kahnemann, 2011 and Shiller, 2005). Indeed, in spite of the recent Noble Prize in Economics awarded for exploring and documenting the psychological biases in economic decision-making, the mainstream finance literature has been so slow to recognize these biases that one can safely accuse it of ignoring this aspect of the literature (Kahneman, 2003). This essay reviews why and when these rationality assumptions of mainstream finance may fail and lead to market inefficiencies and failures. Finally, it develops five simple practical principles to guide regulation designed to mitigate the consequences of these market failures. This essay makes an important contribution to our understanding of the reasons for market failures and how to mitigate their consequences. First, while it is not a comprehensive literature review, its review of the reasons for market failures is more integrated and comprehensive than prior such reviews that have generally focused on a few limited causes of such market failure. In contrast, this essay combines contributions from multiple fields (e.g., finance, economics, psychology, statistics, and politics) to provide a more comprehensive review of the nature of market failures. Second, using the nature of market failures as a guide, this essay develops a set of simple and practical regulatory principles. Thus, this essay should be of much interest to scholars, money managers, business executives, and policy-makers.

This essay started by reviewing the nature of the recent recession — it has been a very significant economic event with widespread investor losses, economic decline, increased unemployment, and many other economic and political dislocations. Thus, it is important to analyze and assess its causes and possibly take corrective action. One contributing factor explaining this recent recession has been the failure of unfettered free-markets and their ability to self-correct. This essay notes that market failure is more common than not and provides a fairly comprehensive examination of the many reasons for market failure. It presents a strong case for greater recognizing and accounting for animal spirits in financial economics. After the 2007–2008 recession there was a move back towards greater regulation in most countries. However, these additional regulations have not been uncontroversial. There is much debate on the nature of optimal regulation. Thus, the last section of this essay was the development of some minimalist guidelines for developing regulations, based on the second section that assessed the various reasons why markets may fail. This essay makes important contributions. First, this review of market failures is more comprehensive and integrated than prior such reviews that have generally focused on a few limited topics. In contrast, this essay combines contributions from multiple fields (e.g., finance, economics, psychology, and politics) to provide a more comprehensive review of the nature of market failures. Second, this essay makes an important case for the greater acceptance of the role of animal spirits in finance and in financial markets. Finally, this essay contributes by using the nature of market failures to guide the development of simple regulatory principles. Thus, this essay should be of much interest to scholars, money managers, business executives, and policy-makers.