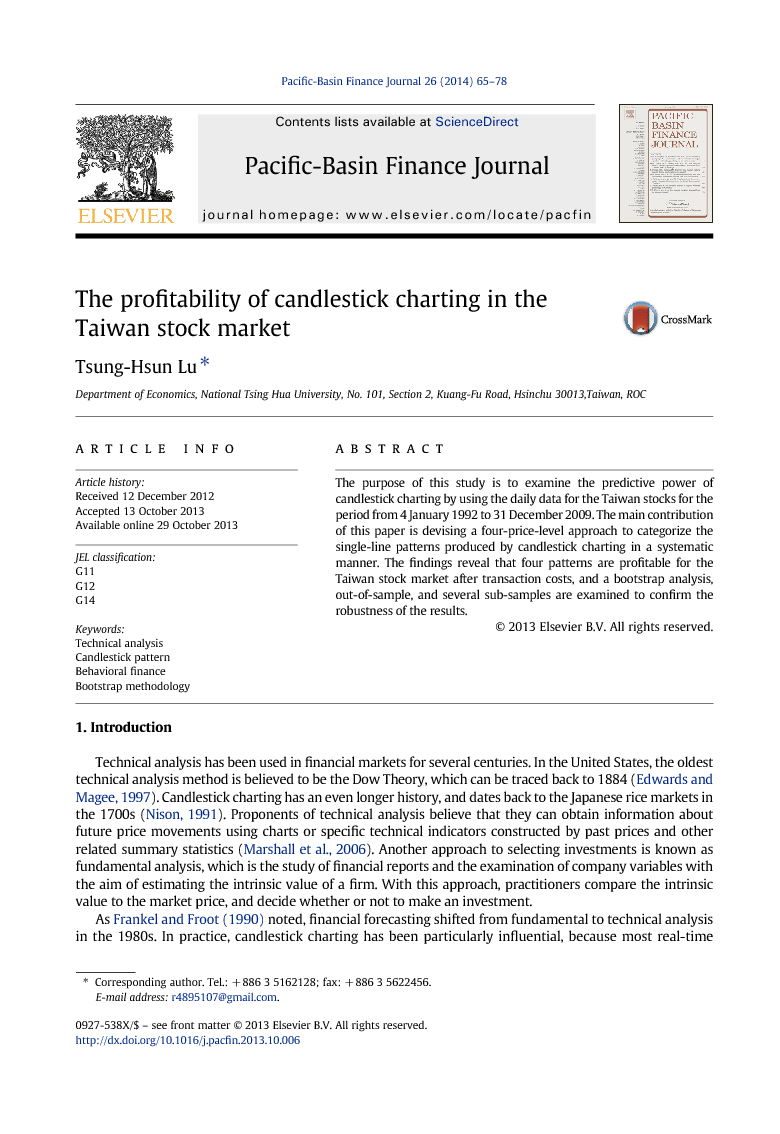 The purpose of this study is to examine the predictive power of candlestick charting by using the daily data for the Taiwan stocks for the period from 4 January 1992 to 31 December 2009. The main contribution of this paper is devising a four-price-level approach to categorize the single-line patterns produced by candlestick charting in a systematic manner. The findings reveal that four patterns are profitable for the Taiwan stock market after transaction costs, and a bootstrap analysis, out-of-sample, and several sub-samples are examined to confirm the robustness of the results.

Technical analysis has been used in financial markets for several centuries. In the United States, the oldest technical analysis method is believed to be the Dow Theory, which can be traced back to 1884 (Edwards and Magee, 1997). Candlestick charting has an even longer history, and dates back to the Japanese rice markets in the 1700s (Nison, 1991). Proponents of technical analysis believe that they can obtain information about future price movements using charts or specific technical indicators constructed by past prices and other related summary statistics (Marshall et al., 2006). Another approach to selecting investments is known as fundamental analysis, which is the study of financial reports and the examination of company variables with the aim of estimating the intrinsic value of a firm. With this approach, practitioners compare the intrinsic value to the market price, and decide whether or not to make an investment. As Frankel and Froot (1990) noted, financial forecasting shifted from fundamental to technical analysis in the 1980s. In practice, candlestick charting has been particularly influential, because most real-time financial information services, such as Reuters, provide up-to-date and detailed data using this approach, and it can even be implemented in MS Excel. With the increasing use of candlestick charting, it is thus necessary to find more effective ways to assess and increase its reliability. To date there has been relatively little research about technical analysis in the field of finance, although academics have recently started to carry out such studies after growing evidence that investors do not always make decisions rationally (Marshall et al., 2006). The emerging field of behavioral finance has also revealed that investors' irrational beliefs or sentiments are not fully captured by fundamental analysis, and thus a number of theories have been proposed to deal with this, such as positive feedback rules (De Long et al., 1990) and anchoring effects (Tversky and Kahneman, 1974), and these appear to agree well with technical analysis. For instance, positive feedback rules reflect trend-chasing in price movements, while anchoring seems to explain some trading principles based on support and resistance levels. However, the findings of studies examining the profitability of various forms of technical analysis have been mixed. Some studies have demonstrated negative evidence for the efficacy of such approaches, including Levy (1971), Malkiel (1981), Bessembinder and Chan (1998), Sullivan et al. (1999), Goldbaum (1999), Wang (2000), Day and Wang (2002), Ready (2002), Sullivan et al. (2003), and Olson (2004), while others have found support for them, including Treynor and Ferguson (1985), Sweeney (1986), Pruitt and White (1988), Brock et al. (1992), Pruitt et al. (1992), Blume et al. (1994), Ito (1999), Ratner and Leal (1999), Lo et al. (2000), Shen (2003), and Neely et al. (2011). These inconsistencies are possibly due to the different patterns, markets, and sample periods selected in these works (Park and Irwin, 2007). The aim of this paper is to examine the effectiveness of candlestick trading strategies. The first empirical study of this approach is assumed to be Caginalp and Laurent (1998), who offer a sound basis for candlestick analysis, especially in defining trends and patterns. Subsequently, Goo et al. (2007), Shiu and Lu (2011), Lu and Shiu (2012), and Lu et al. (2012) all presented results in support of this method. In contrast, Fock et al. (2005), Marshall et al. (2006), Marshall et al. (2008), and Horton (2009) concluded that candlestick charts have no value for investors. To examine this issue in a fresh context, this study employs the daily data for individual stocks in Taiwan, rather than index data, thus avoiding the issue of nonsynchronous trading (Day and Wang, 2002), and considers transaction costs, data snooping and out-of-sample problems when examining the usefulness of candlestick analysis. This is the first paper which creates a four-price-level approach to categorizing and analyzing one-day patterns in a systematic way. Most prior candlestick studies (e.g., Caginalp and Laurent, 1998, Goo et al., 2007 and Horton, 2009) were limited to the one-day patterns mentioned in Nison (1991), while this new approach examines all possible one-day patterns. After using a data set consisting of the daily prices of component stocks from the Taiwan market from 4 January 1992 to 31 December 2009, this study finds significant evidence that, after transaction costs, some one-day candlesticks (e.g., patterns 1p, 2pc, and 3pe, defined below) with the correct trend are useful for this market. One of the most influential works on this issue, Marshall et al. (2006), is closely related to this paper, although there are four main differences. First, Marshall et al. (2006) investigated stocks listed on the DJIA, but the current work examines those on the Taiwan Stock Exchange. Second, the earlier paper used data from 1 January 1992 to 31 December 2002, while this one uses data from 4 January 1992 to 31 December 2009. Third, all possible patterns of single-line candlesticks are examined in the current study, while some of them (e.g., patterns 1p and 3pb, defined below) were ignored in Marshall et al. (2006). Fourth, for robustness and to extend the earlier research, this study not only carries out bootstrap analysis, but also analyzes the use of an out-of-sample test, several sub-sample tests, and a combination of candlestick patterns with moving average rules. The remainder of this paper is organized as follows. The following section introduces candlestick charting, and then describes the research design. The empirical results are presented in the subsequent section, and further evidence is provided, including bootstrap results, out-of-sample and sub-sample results, a comparison and combination with moving averages, and a sensitivity analysis, in the penultimate section. Finally, the last section offers the concluding remarks.

This study examines twelve candlestick one-day patterns by using data for individual Taiwan stocks over the period 1992 to 2009. Of these patterns, one bullish reversal pattern (1p in downtrends), one bearish continuation pattern (2pc in downtrends), and two bearish reversal patterns (1p and 3pe in uptrends) are profitable signals in the Taiwan stock market. The results also suggest that the candlestick approach performs better with smaller firms and lower priced stocks. In the literature on candlestick charting, Fock et al. (2005), Marshall et al. (2006), Marshall et al. (2008), and Horton (2009) find negative evidence for the efficacy of this approach, while Caginalp and Laurent (1998), Goo et al. (2007), Shiu and Lu (2011), Lu and Shiu (2012), and Lu et al. (2012) provide evidence to support it, and it should be noted that these last four papers also use data from the Taiwan stock market. Moreover, both Fock et al. (2005) and Goo et al. (2007) claimed that the performance of the candlestick technique can be improved by using other technical indicators and stop-loss strategies, respectively, which has also been demonstrated in the current study. Despite the variety of tests conducted above, the design of the present study is not without limitations, and three areas for further research are as follows: (1) The relative height of the upper/lower shadows and the real body, as these are regarded as one of the causes of the effectiveness of the candlestick approach. (2) The opening price after a pattern, as this represents the lasting force of the pattern. (3) The volume effect, which is a measure of supply and demand forces, and also a confirmation of price trends. Technical analysts believe that investors are more likely to sell at the peak and buy at the bottom (Brock et al., 1992), and so candlestick patterns are notable when they occur in high- or low-price areas. Further research can thus follow Levy (1971) and Brock et al. (1992), taking the support or resistance level of prices into consideration.