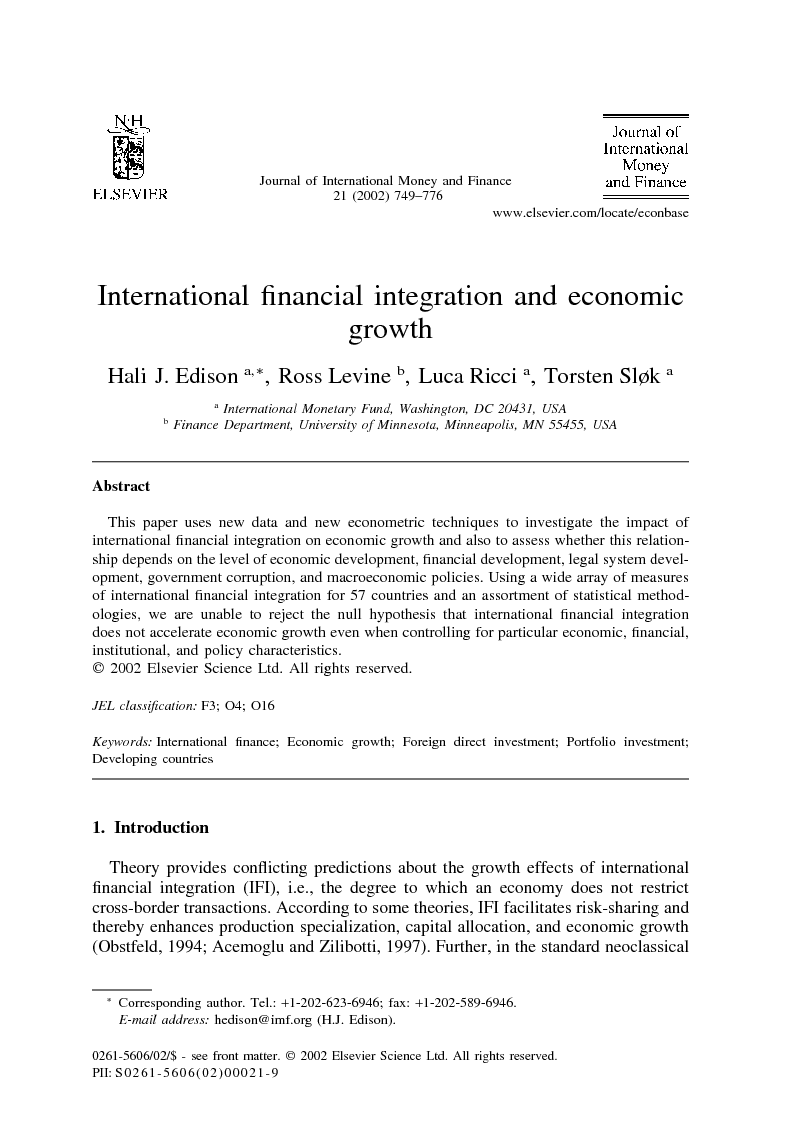 This paper uses new data and new econometric techniques to investigate the impact of international fi nancial integration on economic growth and to assess whether the IFI-growth relationship depends on the level of economic development, educational attainment, fi nancial development, legal system development, govern- ment corruption, and macroeconomic policies. We contribute to the existing literature by (i) using new measures of international fi nancial integration, (ii) examining an extensive array of IFI indicators, (iii) employing econometric methods that cope with statistical biases that have plagued past studies of the IFI-growth relationship, and (iv) investigating, as suggested by some theories, whether IFI has only positive growth effects under particular economic, fi nancial, institutional, and policy regimes. In studying the IFI-growth relationship, the paper examines up to 57 countries over the last 20 – 25 years using an assortment of statistical methodologies. The data do not support the view that international fi nancial integration per se accelerates economic growth, even when controlling for particular economic, fi nan- cial, institutional, and policy characteristics. Note, however, these results do not imply that openness is unassociated with economic success. Indeed, IFI is positively associated with real per capita GDP, educational attainment, banking sector develop- ment, stock market development, the law and order tradition of the country, and government integrity (low levels of government corruption). Thus, successful coun- tries are generally open economies. Rather, this paper fi nds that IFI is not robustly linked with economic growth when using a variety of IFI measures and an assortment of econometric approaches. Similarly, although there are isolated exceptions, we do not reject the null hypothesis that IFI is unrelated to economic growth even when allowing this relationship to vary with economic, fi nancial, institutional, and macroe- conomic characteristics. This paper ’ s fi ndings must be interpreted cautiously. As emphasized in the intro- duction, there are extreme barriers to measuring openness to international fi nancial transactions. There are many different types of fi nancial transactions, countries impose a complex array of barriers, and the effectiveness of these barriers varies across countries, time, and type of fi nancial transaction. Although we use new meas- ures of IFI that improve upon past measures and although we use a more extensiveist of IFI measures than past studies, each of these measures may be criticized for not fully distinguishing international differences in barriers to fi nancial transactions. Given these quali fi cations, this paper fi nds that although international fi nancial inte- gration is associated with economic success (high levels of GDP per capita and strong institutions), the data do not lend much support to the view that international fi nancial integration stimulates economic growth.