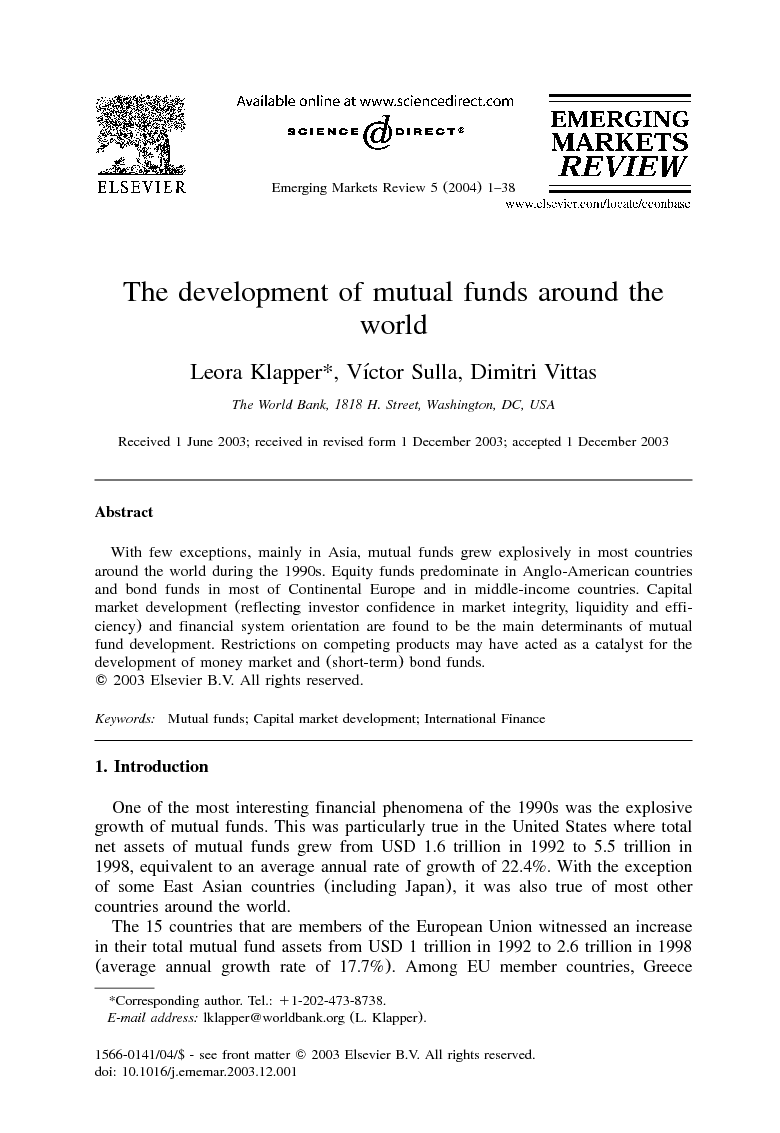 With few exceptions, mainly in Asia, mutual funds grew explosively in most countries around the world during the 1990s. Equity funds predominate in Anglo-American countries and bond funds in most of Continental Europe and in middle-income countries. Capital market development (reflecting investor confidence in market integrity, liquidity and efficiency) and financial system orientation are found to be the main determinants of mutual fund development. Restrictions on competing products may have acted as a catalyst for the development of money market and (short-term) bond funds.

One of the most interesting financial phenomena of the 1990s was the explosive growth of mutual funds. This was particularly true in the United States where total net assets of mutual funds grew from USD 1.6 trillion in 1992 to 5.5 trillion in 1998, equivalent to an average annual rate of growth of 22.4%. With the exception of some East Asian countries (including Japan), it was also true of most other countries around the world. The 15 countries that are members of the European Union witnessed an increase in their total mutual fund assets from USD 1 trillion in 1992 to 2.6 trillion in 1998 (average annual growth rate of 17.7%). Among EU member countries, Greece recorded the highest growth rate at 78%, followed by Italy at 48%, and Belgium, Denmark, Finland and Ireland, all with growth rates of approximately 35%. Some developing countries, such as for example Morocco, registered even higher growth rates, but from much smaller starting points. In the United States, not only did mutual fund assets grow explosively over this period, but household ownership of mutual funds also experienced rapid growth. Survey estimates reported by the Investment Company Institute (the trade association of US mutual funds) show that the proportion of US households owning mutual funds grew from 6% in 1980 to 27% in 1992 and 44% in 1998 (ICI, 2002a)1. The global growth of mutual funds was fuelled by the increasing globalization of finance and expanding presence of large multinational financial groups in a large number of countries and by the strong performance of equity and bond markets throughout most of the 1990s. A third factor was probably the demographic aging that characterizes the populations of most high and middle-income countries and the search of financial instruments that are safe and liquid but also promise high long-term returns by growing numbers of investors. It is also important to note that this growth occurred contemporaneously with a period of high growth in market capitalizations around the world, fueled in part by the technology/internet boom. For example, at the height of the bubble in March 2000, the market capitalization of US publicly traded internet stocks was estimated to be US$1.3 trillion (as compared to a valuation of US$843 billion in June 2000)2. Over the period of our sample, 1991–1999, the market capitalization in the US increased by over 300%, from a base of 68% of GDP to over 180% of GDP. Although we suggest that many factors contributed to the global growth of mutual funds, the popular interest and visibility of equity market performance certainly helped contribute to the increased popularity of mutual fund products. Mutual funds offer investors the advantages of portfolio diversification and professional management at low cost. These advantages are particularly important in the case of equity funds where both diversification and professional management have the potential to add value. For bond and money market mutual funds, the main advantage is transactional efficiency through professional management. In fact, as argued below, tax incentives and regulatory factors have played a big part in stimulating the development of bond and money market funds. One of the distinguishing features of mutual funds is a high level of operational transparency relative to other financial institutions, such as banks, thrifts, insurance companies and pension funds, that also cater to the needs of households. Unlike banks and insurance companies, mutual funds do not assume credit and insurance risks3 and thus do not need to make subjective provisions against non-performing loans or to create actuarial reserves against future insurance claims. Mutual funds invest in marketable instruments and are able to follow a ‘mark-to-market’ valuation for their assets. But the investment risk is borne by investors who, especially in the case of equity funds, participate in the upside potential of corporate equities but are also exposed to substantial losses when markets are falling4. For their successful operation and development, mutual funds require a robust and effective regulatory framework5. As in all cases of agency contracts, investors need to be protected from fraudulent behavior on the part of mutual fund managers, and the diversion of funds into projects or assets that benefit fund managers (agents) at the expense of fund investors (principals). Fund investors bear the investment risk, but they rely on the advertised investment strategies of mutual fund managers for making their selections. It is therefore essential that fund managers should abide by their advertised strategies and should not deviate from their declared objectives without proper prior authorization. Accounting and auditing rules as well as information disclosure and transparency requirements are of paramount importance. Mutual funds also require well-developed securities markets with a high level of market integrity and liquidity. Market integrity implies that insiders are barred from taking advantage of privileged information, while large shareholders and market intermediaries are prevented from engaging in market manipulation. Market integrity also requires that officers of listed corporations observe high standards of corporate governance and honesty, and do not engage in extensive fraud and theft. Market liquidity ensures that transaction costs are low and investors do not suffer from large adverse price movements when they initiate transactions in individual securities. The recent corporate, accounting and securities market scandals in the US have undermined confidence in the integrity of US markets and may have contributed to the increased volatility of markets. Their implications for the future evolution of mutual funds are difficult to assess at this juncture, although efforts to strengthen corporate governance, ensure auditor independence, and enhance the credibility of published corporate information would help in averting any further erosion of investor confidence in market integrity. This paper proceeds as follows: Section 2 reviews the mutual fund literature; Section 3 reports our data and summary statistics; Section 4 discusses structures and growth patterns of mutual funds around the world; Section 5 discusses determinants of mutual fund development; and Section 6 concludes.

During the 1990s, mutual funds grew explosively in most countries and regions around the world. In high-income countries, mutual fund assets expanded from 10 to 24% of GDP over this period, and in middle-income countries they first grew from 4 to 8% but then fell back to 4% of GDP after the East Asian crisis. This reversal was mostly caused by the experience of Asian countries. A total of 16 countries had mutual fund sectors with net assets exceeding 20% of GDP in 1998, and 11 of these countries were from Continental Europe. In general, we find that mutual funds are more advanced in countries with better developed and more stable capital markets ( reflecting investor confidence in market integrity, liquidity and profitability, and a greater supply of investable securities ) . We also find that equity funds dominate in Anglo-American countries, and bond funds in most of Continental Europe and in middle-income countries. In developed countries, investors are concerned with market microstructure; for example, equity funds are significantly smaller in countries with higher market volatility and weaker accounting standards. In comparison, in developing countries macroeconomic factors appear most important; for example, bond fund development in developing countries is significantly related to higher GDP per capita and lower interest rates. However, in both developed and developing countries, lower country risk and higher investor confidence leads to greater fund development. In addition, restrictions on competing savings products may have acted as a catalyst for the development of money market and ( short-term ) bond funds.