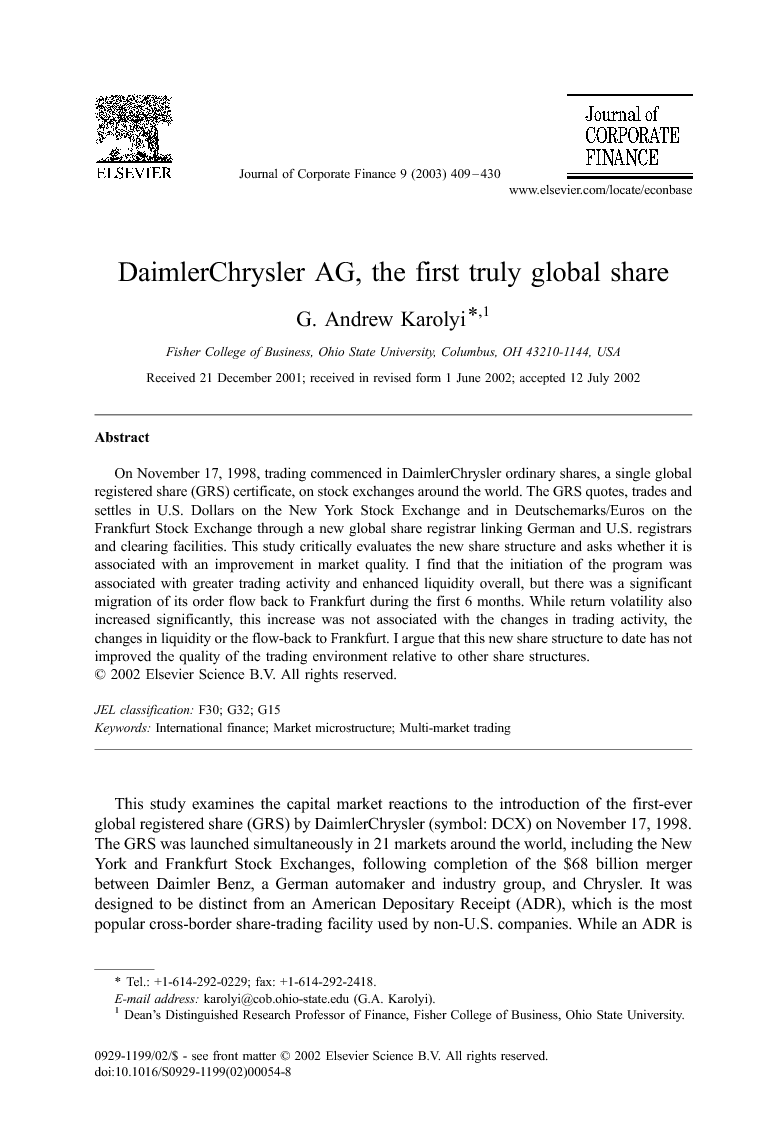 On November 17, 1998, trading commenced in DaimlerChrysler ordinary shares, a single global registered share (GRS) certificate, on stock exchanges around the world. The GRS quotes, trades and settles in U.S. Dollars on the New York Stock Exchange and in Deutschemarks/Euros on the Frankfurt Stock Exchange through a new global share registrar linking German and U.S. registrars and clearing facilities. This study critically evaluates the new share structure and asks whether it is associated with an improvement in market quality. I find that the initiation of the program was associated with greater trading activity and enhanced liquidity overall, but there was a significant migration of its order flow back to Frankfurt during the first 6 months. While return volatility also increased significantly, this increase was not associated with the changes in trading activity, the changes in liquidity or the flow-back to Frankfurt. I argue that this new share structure to date has not improved the quality of the trading environment relative to other share structures.

This study examines the capital market reactions to the introduction of the first-ever global registered share (GRS) by DaimlerChrysler (symbol: DCX) on November 17, 1998. The GRS was launched simultaneously in 21 markets around the world, including the New York and Frankfurt Stock Exchanges, following completion of the $68 billion merger between Daimler Benz, a German automaker and industry group, and Chrysler. It was designed to be distinct from an American Depositary Receipt (ADR), which is the most popular cross-border share-trading facility used by non-U.S. companies. While an ADR isa separate certificate issued by U.S. depositary banks as a claim against home-market shares deposited with a local custodial bank, the GRS involves only one security globally. It required the establishment of a single ‘‘global’’ share registrar, the coordination of transfer agents and an electronic linking of clearing corporations, all in order to facilitate its trading, settlement and seamless, fungible transfer from one market to another. The shares are quoted, traded and settled in U.S. Dollars in New York and Euros in Frankfurt. The creation of this facility was hailed as a landmark event for global equity markets. 2 There are two contributions of this clinical study of DaimlerChrysler’s GRS. 3 Firstly, it is the first to study an important new financial innovation for cross-border trading of shares for global companies. 4 Secondly, and more importantly, it provides us as researchers with a unique experiment in which to evaluate the impact of international cross-listings on the liquidity and return volatility of the shares, a subject of increasing interest among policymakers around the world. While corporations see cross-listings as value-enhancing, the changes in liquidity, volatility and the cost of trading associated with potential order flow migration can adversely impact the quality of the domestic equity market. There have been dozens of studies that examine this question with mixed results (see Karolyi, 1998 for a survey). One consistent finding, however, is that the impact of cross-listing on liquidity and volatility depends on the extent of price/quote transparency across markets or the strength of intermarket informational linkages ( Pagano, 1989; Chowdhry and Nanda, 1991; Domowitz et al., 1998 ). These studies show that if price information is freely available across markets, cross-listing results in an improvement in market quality; where information linkages are poor, however, cross-listing reduces liquidity and increases volatility in the domestic market. The GRS and its seamless global registration, transfer and settlement procedures was designed to provide a more ‘‘trans- parent’’ trading environment than a traditional ADR facility. The central hypothesis of this study is whether market quality improvements were observed with the introduction of DaimlerChrysler’s GRS. I specifically investigate changes to two measures of market quality. First, I evaluate the impact of the introduction of the GRS on trading activity and liquidity. I compare the dollar value of trading and underlying bid-ask spreads in DCX to that of Daimler Benz andChrysler shares before the merger and find that trading volume increased and spreads decreased. However, I also show that a significant shift in trading activity took place away from New York to Frankfurt, the home market, a phenomenon referred to as ‘‘flow-back.’’ Ironically, many market observers hypothesized that the GRS would help to avert flow- back. In a February 1999 article on ‘‘Surviving Flowback’’ in Global Finance , it was quoted that, ‘‘ ... some bankers expect the global ordinary share to become the model for cross-border mergers seeking to contain flow-back ... the single foreign share makes the share-custody process cheaper and easier and better aligns prices in the two markets, although in separate currencies’’ (p. 46). Second, I evaluate the impact of the introduction of the GRS on stock return volatility. I find that return volatility increased, but that it could not be associated with changes in trading activity or liquidity nor with the ‘‘flow-back’’ of trading activity to Frankfurt. The remainder of the paper is organized as follows. The next section of the paper analyzes the structure of the new share facility, especially in comparison to existing ADR structures, and how its creation was related to the DaimlerChrysler merger. Results follow. For each test, I briefly sketch out the analytical framework for understanding the impact of cross-listings, in general, on liquidity and volatility, outlining the key predictions and existing results from the literature. The goal is to establish a benchmark for any findings on the impact of the introduction of the GRS for DaimlerChrysler. I conclude the paper by discussing various policy implications and ideas for future research.