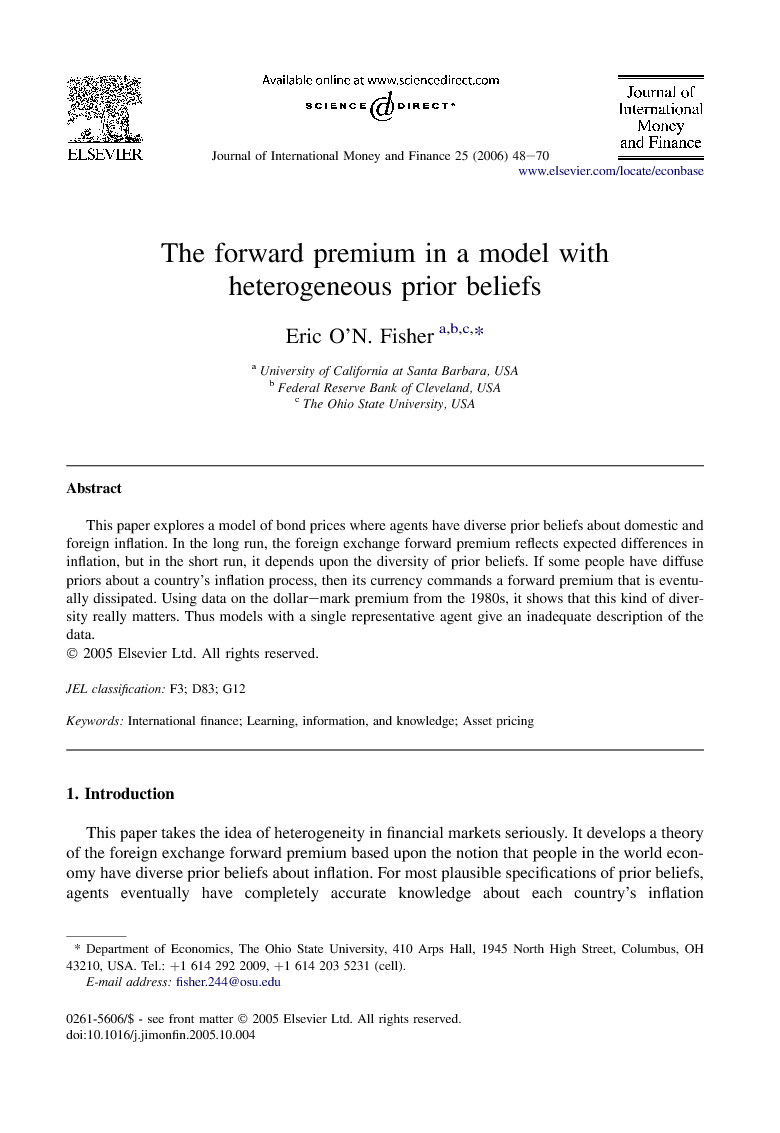 This paper explores a model of bond prices where agents have diverse prior beliefs about domestic and foreign inflation. In the long run, the foreign exchange forward premium reflects expected differences in inflation, but in the short run, it depends upon the diversity of prior beliefs. If some people have diffuse priors about a country's inflation process, then its currency commands a forward premium that is eventually dissipated. Using data on the dollar–mark premium from the 1980s, it shows that this kind of diversity really matters. Thus models with a single representative agent give an inadequate description of the data.

This paper has developed a new theory of the forward premium based upon a model that takes heterogeneity in financial markets seriously. The model has striking predictions for the forward premium; it shows that diverse beliefs about a country’s inflation process make its cur- rency trade forward at a premium in contracts whose horizons are greater than one month. The calibration of the model is perhaps plausible, but it predicts perhaps too much learning. Still, the notion that agents had diverse beliefs about monetary policy and doubted that inflation could be abated at the beginning of the 1981 is indeed intuitive. My primary empirical contribution is that I actually estimate the precision with which dif- ferent classes of agents in the world economy held plausible prior beliefs. There is evidence in these data that a model with one agent is just not an accurate description of world asset markets. This is the first time that an extension of the elegant models based upon Harrison and Kreps (1978) and Morris (1996) has been taken to the data, and my work shows that these authors were quite right to worry about diversity of beliefs in financial markets. The model has many weaknesses. First and foremost, it is ludicrous to impose that the real exchange rate is constant. My only defense is that a good model of the spot exchange rate is left to those with superior analytical powers. Another important weakness is that the model assumes that inflation process in each country is independently and identically distributed. Inflation is obviously correlated between countries and across time, but this fact is difficult to incorporate into an analytically tractable model with Bayesian learning. The calibrations and estimates are suggestive but not exhaustive. Again, my defense is that there is no other study in international finance that takes a structural model with heterogeneous priors and Bayesian learning to the data. So this empirical work is just a first step. In an important sense, my model is a better description of term structure than it is of the forward premium. 17 Most empirical analyses of the yield curve show that the expectations hy- pothesis of the term structure is not true; the spreads between certain long rates and short rates do not predict future short rates. Rudebusch (1995) argues that the monetary authority’s policy distorts bond prices at the short end of the yield curve. My model offers an alternative avenueworthy of exploration; future researchers can analyze the effect of heterogeneity of beliefs on the yield curve in a national bond market. Perhaps this paper will spur other researchers in international finance to investigate models with heterogeneous beliefs. It is remarkable that the ‘‘forward discount anomaly’’ can be ex- plained so easily in a model with risk-neutral agents. It is essential that we economists be care- ful in our interpretations of the notion of rational expectations as an equilibrium concept. Models with heterogeneous prior beliefs are more general than the usual ones with one repre- sentative agent. The equilibria described in this paper all converge to the ‘‘rational expectations equilibrium’’ if agents’ priors are well behaved. And the typical model used in international finance is a special case of the one that has been explored; after all, one can always impose that everyone’s perfectly precise priors agreed with the actual distribution of inflation. But in- formational heterogeneity and limited short selling surely characterize actual financial markets. So it would be nice to continue building models that incorporate these obvious facts.