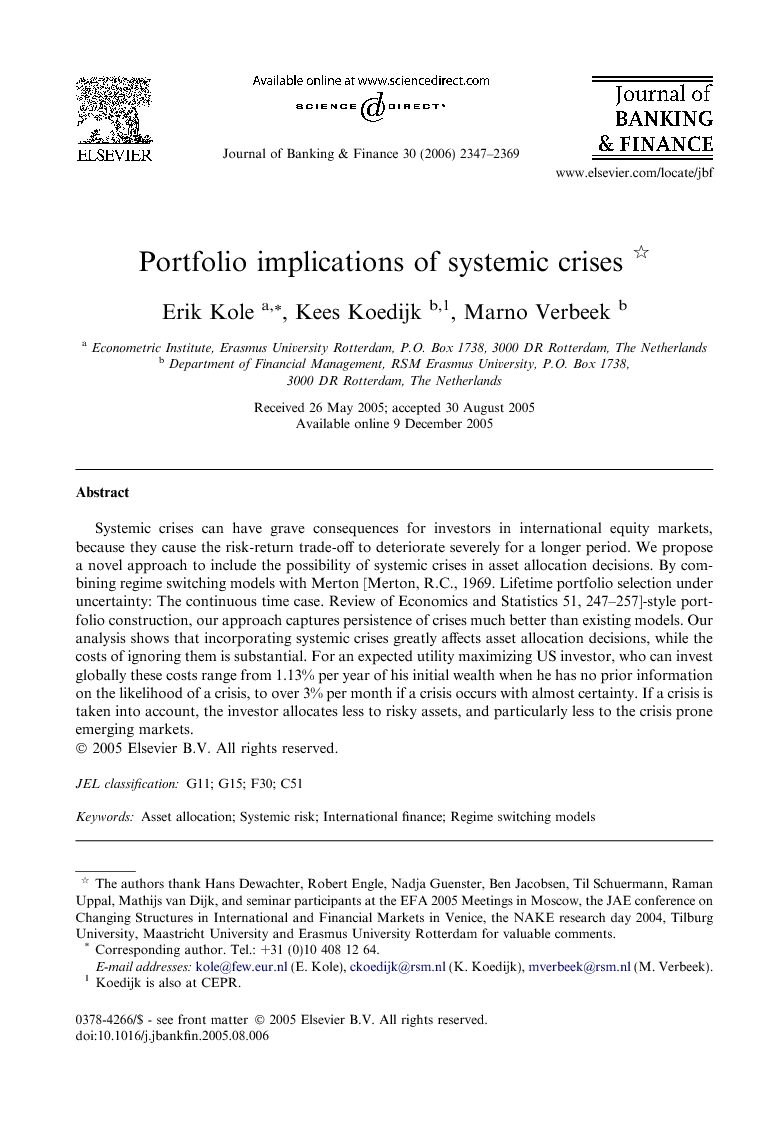 Systemic crises can have grave consequences for investors in international equity markets, because they cause the risk-return trade-off to deteriorate severely for a longer period. We propose a novel approach to include the possibility of systemic crises in asset allocation decisions. By combining regime switching models with Merton [Merton, R.C., 1969. Lifetime portfolio selection under uncertainty: The continuous time case. Review of Economics and Statistics 51, 247–257]-style portfolio construction, our approach captures persistence of crises much better than existing models. Our analysis shows that incorporating systemic crises greatly affects asset allocation decisions, while the costs of ignoring them is substantial. For an expected utility maximizing US investor, who can invest globally these costs range from 1.13% per year of his initial wealth when he has no prior information on the likelihood of a crisis, to over 3% per month if a crisis occurs with almost certainty. If a crisis is taken into account, the investor allocates less to risky assets, and particularly less to the crisis prone emerging markets.

Systemic crises can wreak havoc on financial systems, making these crises an important issue for study. De Bandt and Hartmann, 2000 and Dow, 2000 provide excellent surveys on the characteristics and causes of systemic crises for the different financial markets. In this article we focus on the consequences of systemic crises for investors in international equity markets. International investors suffer from the deterioration of the risk and return characteristics, as systemic crises exhibit a sharp drop in returns, an upswing in volatilities and a rise of the correlations between financial markets, all on a global scale. Evidence of this behavior has been based on the October 1987 stock market crash, and the crises that originated from the emerging markets in the 1990s (e.g. the Mexican crisis of 1994, the Asian crisis of 1997 and the Russian crisis of 1998).2 Due to their irregular and rare occurrence, standard models that investors use to support their asset allocation decisions typically fail to account for systemic crises, resulting in suboptimal allocations. Das and Uppal (2004) conclude that the portfolio implications of systemic crises are limited. However, their approach implies that a systemic crises is a short-lived event that is hardly persistent, which is in contrast with recent crises and their aftermaths that lasted several months. If the risk-return trade-off deteriorates for a longer period, the impact of systemic crises will be more severe. To include possible persistence, we investigate their impact by means of a regime switching model in the style of Ang and Bekaert (2002), which we combine with optimal portfolio construction as set out by Merton, 1969 and Merton, 1971. This approach allows us to model the behavior of asset returns on a regime by regime basis, making it both simple and flexible. Formulating and solving the asset allocation problem in continuous time ensures analytical tractability. We distinguish among two strategies that a utility-maximizing investor can adopt to solve his asset allocation problem: a crisis conscious and a crisis ignorant strategy. The crisis conscious strategy includes a systemic crises as a distinct regime in which all markets encounter a shock, while the crisis ignorant strategy does not. For both strategies, we construct optimal portfolios. By comparing the portfolios we assess the implications and importance of a systemic crisis. For a US-based global investor, who can invest in stock markets in the US, Europe, Japan, Hong Kong, Thailand, Korea and Brazil, and a riskless asset, we find that the crisis conscious strategy leads to a reduction of the investments in risky assets and a shift to countries less prone to a crisis. A small probability of a crisis (of say 5%) already causes these adjustments, and they quickly become more pronounced if the probability increases. Ignoring a crisis is costly, as the investor requires a certainty equivalent return of 1.13% per year as a compensation if he has no information on the ex-ante probability of a crisis. If the investor knows with almost certainty that a crisis occurs, this compensation can easily exceed 3% per month. This paper extends the analysis of Das and Uppal (2004) in three important aspects. First, our model is better able to capture the persistence of a crisis, because we include a systemic crisis as a distinct regime in a regime switching model, while they incorporate it by adding a perfectly correlated jump to a geometric Brownian motion.3 Second, we analyze the impact of systemic crises in a dynamic setting, which can adapt to changes in the behavior of asset prices. Third, our model without a crisis is more realistic, as the model proposed by Das and Uppal implies a normal distribution with a constant mean and variance. We also extend the work of Liu et al. (2003) by showing the effects of systemic crises on diversification, while their model is limited to a univariate setting with one risky asset only. Our finding that persistence is an important aspect of systemic crises is consistent with their results. Our approach is complementary to Ang and Bekaert, 2002 and Ang and Bekaert, 2004, who consider international asset allocations in a regime-switching framework, as we use a similar framework. Because of the severity of the crisis regime, we find larger effects of regime switches on diversification. As another extension to their work we show how the resulting allocation problem can be solved in continuous time. In a broader sense our study can be seen as an investigation of the hypothesis that diversification advantages fail to be realized due to increasing correlations during market downturns, such as systemic crises. This claim has been put forward by various authors,4 but it is not clear how strong this effect is. Ang and Chen (2002) conclude that the costs of ignoring increasing correlations during bear markets are substantial, but Ang and Bekaert (2002) find that diversification advantages remain present. In our approach, an increase in correlations is inherent in a crisis. If the probability with which a crisis hits increases, diversification possibilities erode rapidly and cause large divestments. If the investor faces short sales constraints, he completely withdraws from equity markets. The outline of the paper is as follows. In Section 2 we discuss how the crisis conscious and crisis ignorant strategies produce optimal portfolios and how the portfolios can be compared. Section 3 presents the actual design of the study, including the data. We discuss the estimation results in Section 4, and derive and compare the allocations produced by the different strategies in Section 5. Section 6 concludes.

A systemic crisis in international equity markets can put investors in dire straits, because of the simultaneous decrease in expected returns and increase in volatilities and correlations. Standard models supporting asset allocation decisions typically fail to fully capture systemic crises due to their irregular and relatively rare occurrences. In this paper, we have proposed a framework to determine the impact of systemic crises on asset alloca- tions, which combines regime switching models with optimal portfolio construction in continuous time. An investor can adopt a crisis conscious strategy that includes systemic crises, and, as an alternative, a crisis ignorant strategy which excludes it. We have studied the allocations of a US-based, global investor, who maximizes his expected utility by investing globally in equity markets and a riskless asset in a general uninformative case and the informative case of the Asian crisis. In the crisis conscious strategy, the investor decreases leverage and shifts investments to countries that are less prone to a crisis. The certainty equivalent returns indicates that these differences are economically important and quickly rise during October 1997. The pronounced portfolio differences and their economic importance indicate that per- sistence is an important characteristic of systemic crises. We have estimated that the prob- ability of remaining in the crisis regime for another month equals 0.90. Because of this persistence, we find stronger evidence advocating the incorporation of systemic crises in asset allocation decisions than reported by Das and Uppal (2004, 2003) . Crisis persistence also explains the large differences between the crisis conscious and ignorant strategies and the large required compensation if a crisis occurs with almost certainty.Systemic crises seriously diminish diversification possibilities. If a crisis has a small probability of occurrence, this effect is present but limited. As the probability increases, the impact becomes larger and leads to short positions in several markets. When the inves- tors faces short sales constraints, he withdraws from equity markets completely. These findings are complementary to Ang and Bekaert (2002) who conclude that the presence of a bear regime in a regime switching model does not extinguish diversification possibil- ities. However, because of its severity the crisis regime in our model causes a much stron- ger deterioration in the risk-return trade-off than the bear regime in their model.