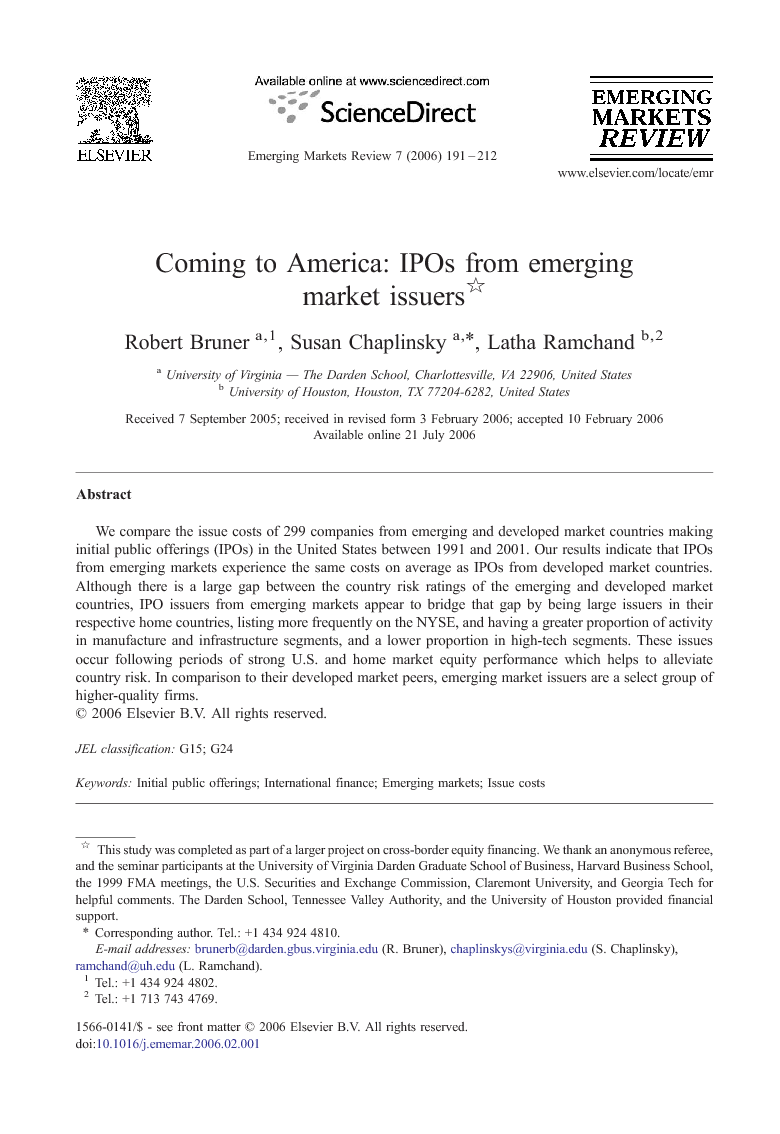 Both the univariate and regression results suggest no significant difference in the underpricing and direct costs between emerging and developed market IPOs. Given the evidence in previous studies showing that underpricing and underwriting fees are positively related to risk and information asymmetry, the absence of differences in underpricing between emerging and developed market IPOs is surprising — particularly in light of the large difference in country risk between the samples. However, it is important to note that issuance in the U.S. is the end of the entry process into the U.S. At the beginning is a selection process by issuers and underwriters that must assess how successful an offering will be in the U.S. market. The finding of no difference in issue costs raises the possibility that emerging market IPOs have firm, issue, and market characteristics that compensate in other ways for their greater country risk. The results we report in this paper are consistent with research comparing U.S. and foreign IPOs ( BCR, 2004 ). In that paper we found evidence that foreign U.S. IPOs had characteristics that helped them bridge the gap with domestic U.S. IPOs so that when all factors were held constant there were no significant differences in issue costs between the groups. In that setting we examined foreign IPOs as a group without regard to whether they were from emerging or developed market countries. The evidence we provide here shows a more discernable degree of compensation, especially when one examines the lowest rated emerging market firms in relation to others. Since emerging market IPOs are likely to be riskier (judged by higher country risk ratings), we conclude that the lack of differences in issue costs derives from compensating features or characteristics of the firm, issue, or market that lessen investors' concerns about country risk. Emerging market IPOs have characteristics consistent with higher quality or lower risk, such as smaller issue sizes, larger relative size in their home market, and greater frequency of NYSE listings. In addition, the issuers from emerging markets tend to have more tangible assets and are less likely to be high-tech ventures which also entail greater product risk. Both emerging and developed market issuers enter the U.S. market after strong domestic and home market equity performance. This suggests that equity issuance – whether U.S., foreign, emerging or developed market – is highly dependent on strong equity market conditions. Earlier we noted that, in a frictionless world, easy entry would result in a wide diversity of issuers on many dimensions such as size and risk. But in a world of capital market friction, only those firms able to overcome these frictions find their way to new markets. Our findings are not consistent with a hypothesis of frictionless entry, but one of selective entry. Emerging market IPO issuers exhibit less diversity on the dimensions noted above that effectively compensate for their risks. Viewed from another perspective, this selectivity speaks indirectly to high costs of capital raising and barriers to entry. Many emerging market firms have incentives to issue in the U.S. but only a select few find it feasible to do so