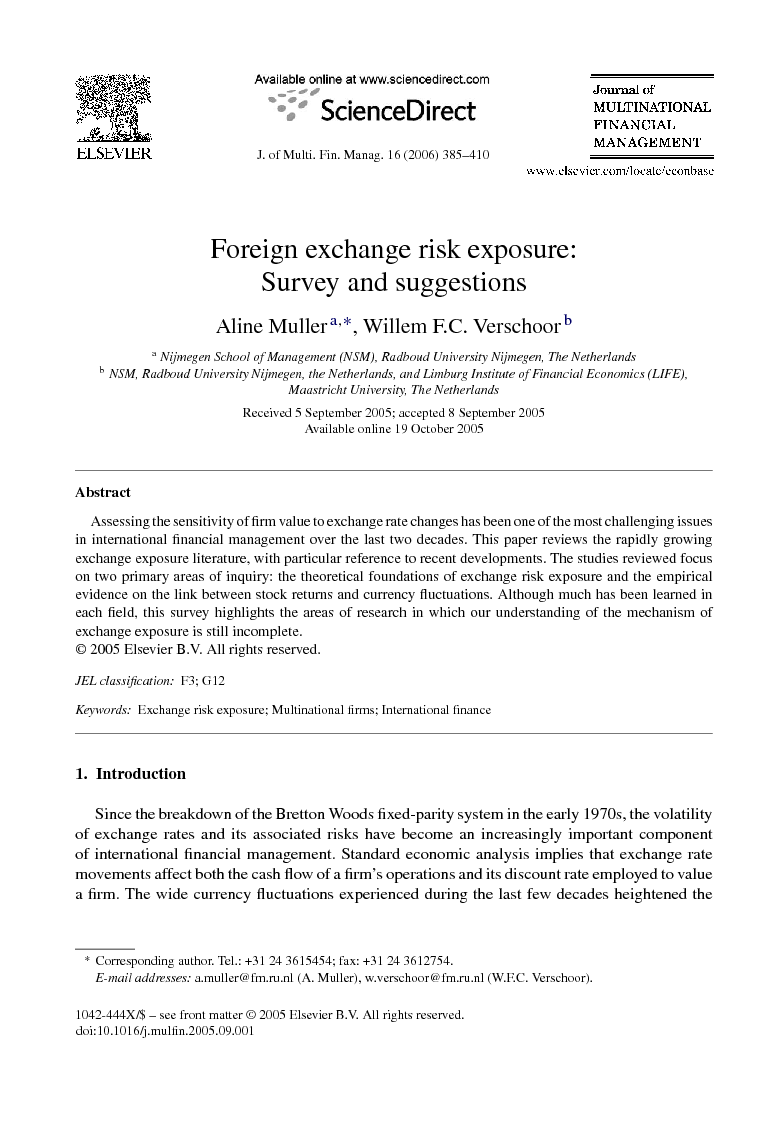 Assessing the sensitivity of firm value to exchange rate changes has been one of the most challenging issues in international financial management over the last two decades. This paper reviews the rapidly growing exchange exposure literature, with particular reference to recent developments. The studies reviewed focus on two primary areas of inquiry: the theoretical foundations of exchange risk exposure and the empirical evidence on the link between stock returns and currency fluctuations. Although much has been learned in each field, this survey highlights the areas of research in which our understanding of the mechanism of exchange exposure is still incomplete.

Since the breakdown of the Bretton Woods fixed-parity system in the early 1970s, the volatility of exchange rates and its associated risks have become an increasingly important component of international financial management. Standard economic analysis implies that exchange rate movements affect both the cash flow of a firm's operations and its discount rate employed to value a firm. The wide currency fluctuations experienced during the last few decades heightened the interest in the potential vulnerability of multinational firms to foreign exchange rate risk, and this issue has spawned a considerable amount of research. From a theoretical perspective, it is a generally held view that exchange rate fluctuations are an important source of macroeconomic uncertainty. They should thus have a significant impact on firm value, regardless of whether the firm is domestically or internationally oriented (Shapiro, 1975, Hodder, 1982, Levi, 1994 and Marston, 2001). Numerous papers analytically focus on the foundations of currency risk exposure and enhance our understanding of the mechanism through which exchange rate shocks influence firm value. Overall, their analyses highlight the importance of a large and complex set of parameters—including among others a firm's cost and revenue structure, its competitive position and environment, the elasticity of its input and output markets as well as the pricing strategies adopted by the company itself and its competitors—in the determination of a firm's sensitivity to exchange rate fluctuations. In contrast to theoretical expectations, empirical research on exchange risk exposure appears conflicting and is mixed at best. While studies have so far documented weak contemporaneous relationships between exchange rates and US stock returns, international evidence focusing on more open economies yield more significant currency risk exposure estimates. A possible rationalization for the difficulties in documenting a measurable impact of foreign exchange risk on stock market values is that firms are aware of their currency exposures and are eliminating foreign currency risk by hedging (Bartov and Bodnar, 1994).1 Since the long-term effects of exchange rate movements are difficult to ascertain, hedging effectiveness for future cash-flows is, however, doubtful. Moreover the underlying assumption that the market should be aware of the impact of companies’ forex risk management practices on an ongoing basis seems unlikely (Brown, 2001). The counter-intuitiveness of empirical findings has thus influenced the developments of new foreign exchange exposure estimation procedures. Starting from the seminal estimation models of Adler and Dumas (1984) and Jorion (1990), subsequent papers study the impact of different variable definitions, model specifications and estimation designs while others are exploring the interrelations between exchange rate exposures and economic competitive environments. Even though recent findings generally favor the conclusions that exchange rate fluctuations affect, to a certain extent—shareholder wealth, these endeavors meet nonetheless with limited success in documenting the levels of exposures that theoretical research suggests. In this paper, we survey the extensive literature on exchange risk exposure relating to: (i) the theoretical foundations of exchange rate exposure, and (ii) the empirical findings and recent development of estimation designs put forth over the last two decades. We will highlight the main conclusions that have emerged in these research areas and identify a number of unanswered questions. It is our purpose to present a comprehensive review of the extensive literature, attempting to synthesize much of the recent work within common frameworks rather than summarizing the contributions of individual papers. Our objective is to offer some perspective on the exposure literature for investors, financial analysts, firms’ managers, and policy makers while also providing a roadmap for further future research. The paper is organized as follows. The first section discusses the seminal and influential articles on the definition and mechanism of exchange risk exposure. This will serve as an intellectual base for the rest of the paper. In Section 2, the focus of attention is turned to the challenges in empirically measuring firms’ sensitivity to exchange rate uncertainty. Section 3 concludes the paper.