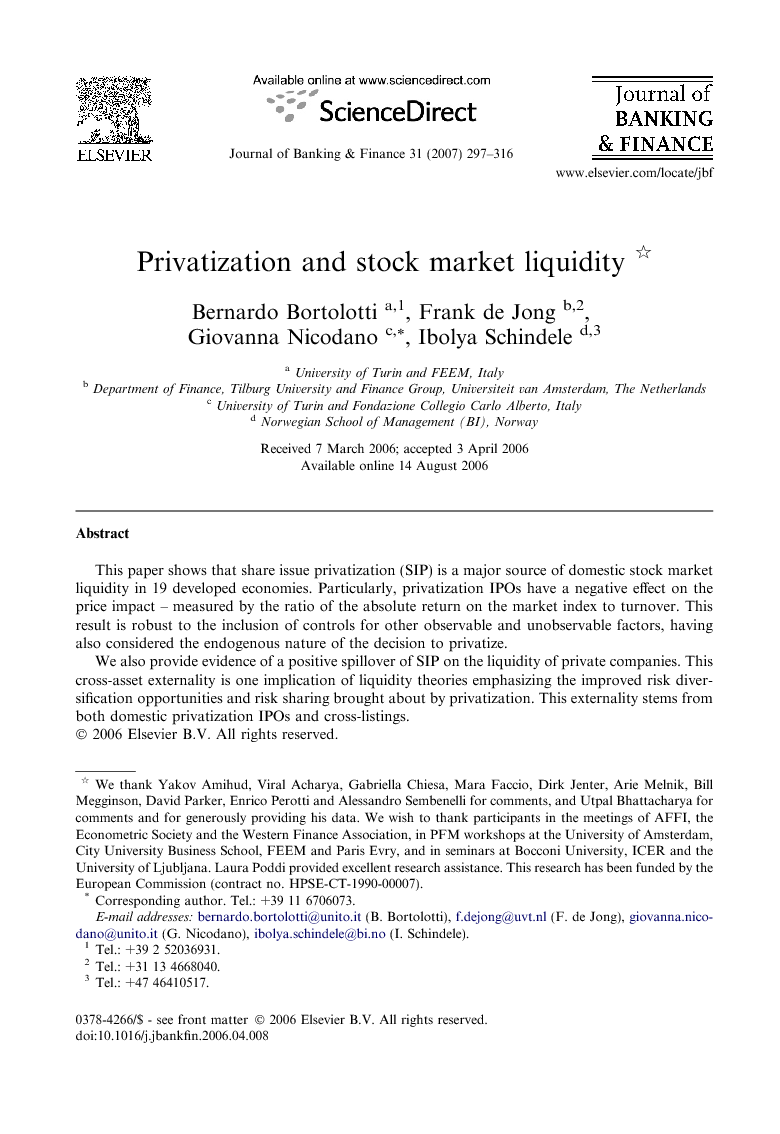 This paper shows that share issue privatization (SIP) is a major source of domestic stock market liquidity in 19 developed economies. Particularly, privatization IPOs have a negative effect on the price impact – measured by the ratio of the absolute return on the market index to turnover. This result is robust to the inclusion of controls for other observable and unobservable factors, having also considered the endogenous nature of the decision to privatize. We also provide evidence of a positive spillover of SIP on the liquidity of private companies. This cross-asset externality is one implication of liquidity theories emphasizing the improved risk diversification opportunities and risk sharing brought about by privatization. This externality stems from both domestic privatization IPOs and cross-listings.

This paper contributes to understanding the sources of variation in market liquidity by studying price impact and turnover of 19 stock market indexes. We document that liquid- ity is enhanced by share issue privatization, as often claimed by policymakers. The results survive the inclusion of several controls for other observable and unobservable factors and are robust to endogeneity concerns. Privatization-related reductions in the aggregate price impact are not simply driven by the liquidity of privatized stocks themselves, but also by a cross-asset externality generated by SIP. In other words privatization has a spillover effect on the price impact of non-privatized stocks, besides the perhaps trivial impact on the liquidity of privatized companies’ shares. This externality is related to both domestic privatization IPOs and cross-listings. We sug- gest to interpret this finding in the light of liquidity theories that emphasize the role of risk diversification and risk sharing as well as positive listings externalities. Through privatiza- tion, governments allow for the trading of company related risk which was not tradable before, thereby allowing for increased diversification. Through cross-listings, governments enhance foreign investors’ recognition and participation in privatized stocks, lowering the overall risk borne by domestic investors. Both effects reduce the required risk premium thereby increasing the liquidity of private securities listed in the domestic stock market