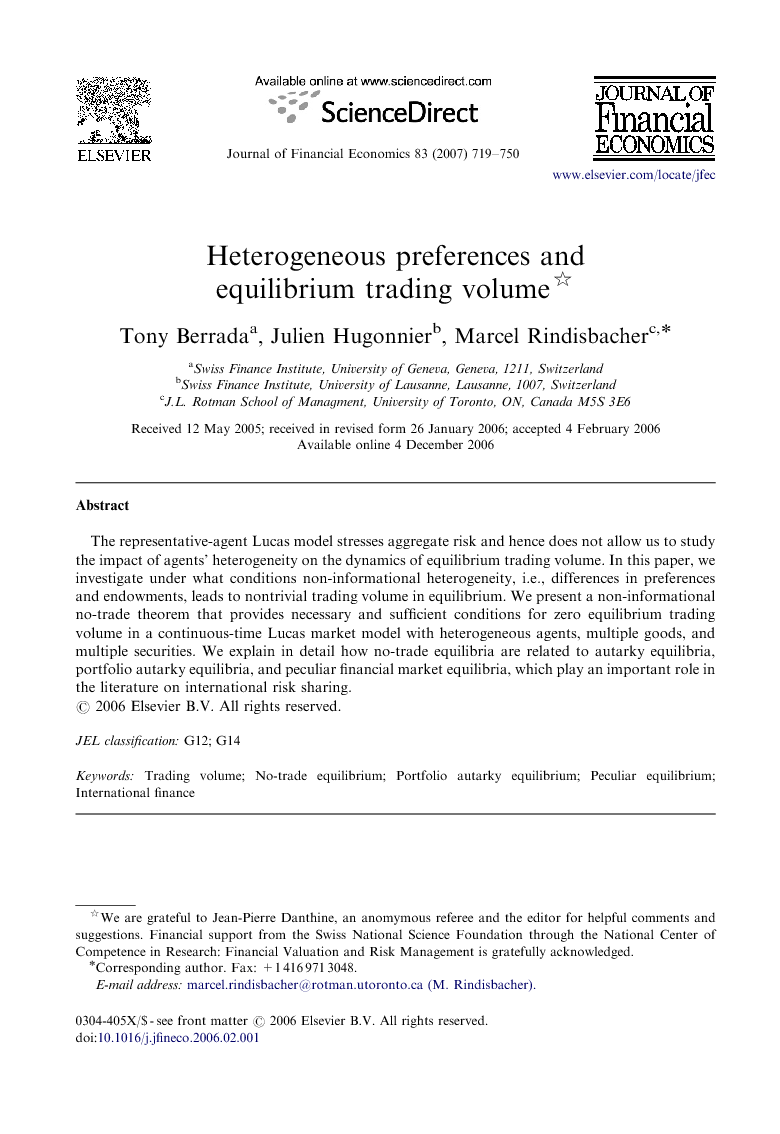 The representative-agent Lucas model stresses aggregate risk and hence does not allow us to study the impact of agents’ heterogeneity on the dynamics of equilibrium trading volume. In this paper, we investigate under what conditions non-informational heterogeneity, i.e., differences in preferences and endowments, leads to nontrivial trading volume in equilibrium. We present a non-informational no-trade theorem that provides necessary and sufficient conditions for zero equilibrium trading volume in a continuous-time Lucas market model with heterogeneous agents, multiple goods, and multiple securities. We explain in detail how no-trade equilibria are related to autarky equilibria, portfolio autarky equilibria, and peculiar financial market equilibria, which play an important role in the literature on international risk sharing.

In this paper we investigate under what conditions non-informational heterogeneity among agents leads to positive trading volume in equilibrium. We provide necessary and sufficient conditions for the existence of an efficient no-trade equilibrium in a continuous- time economy with multiple goods, multiple securities, symmetric information, and homogeneous beliefs. We illustrate our results with numerous examples that include most of the classic multi-good utility functions. Relations with linear sharing rules, fund separation, autarky, and portfolio autarky equilibria are also addressed. No-trade equilibria are computationally tractable and thus attractive for future empirical studies of the connections between financial markets, exchange rates, and spot markets for goods. In contrast to portfolio autarky equilibria they cannot necessarily be implemented by trades only in the spot market of consumption goods. Financial markets are non-redundant and, contrary to peculiar financial market equilibria, asset volatilities are non-degenerate in general. If extended to an overlapping generation setting where one cohort of investors is always in their initial period, these equilibria can potentially be used to derive tractable efficient equilibria with trade in both the spot market for consumption goods and the financial markets. The study of such a model would overcome some of the deficiencies of the classic international asset pricing models and is left for future research.