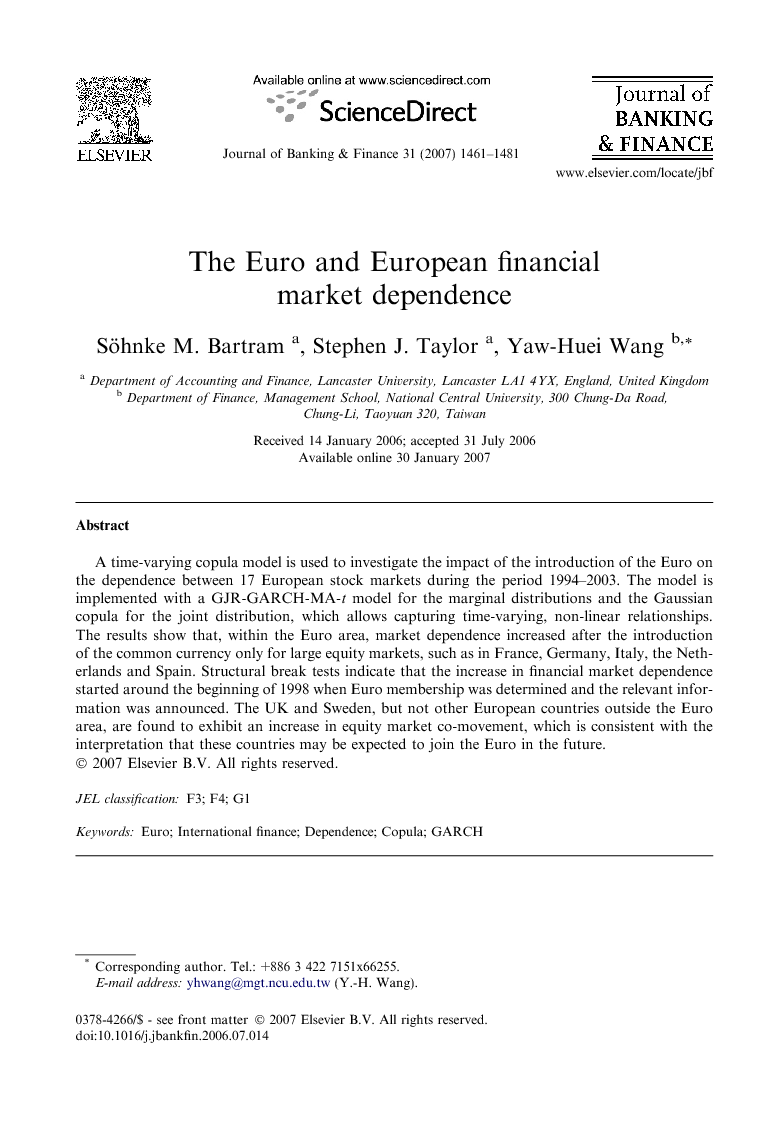 A time-varying copula model is used to investigate the impact of the introduction of the Euro on the dependence between 17 European stock markets during the period 1994–2003. The model is implemented with a GJR-GARCH-MA-t model for the marginal distributions and the Gaussian copula for the joint distribution, which allows capturing time-varying, non-linear relationships. The results show that, within the Euro area, market dependence increased after the introduction of the common currency only for large equity markets, such as in France, Germany, Italy, the Netherlands and Spain. Structural break tests indicate that the increase in financial market dependence started around the beginning of 1998 when Euro membership was determined and the relevant information was announced. The UK and Sweden, but not other European countries outside the Euro area, are found to exhibit an increase in equity market co-movement, which is consistent with the interpretation that these countries may be expected to join the Euro in the future.

The introduction of the Euro has been one of the most important events for global financial markets in the last decade. Detken and Hartmann, 2000, Detken and Hartmann, 2002 and Perée and Steinherr, 2001 show that the Euro has become one of the three major currencies in the world after its introduction, taking its place alongside the US dollar and the Japanese yen. An immediate consequence of the adoption of the common currency has been the convergence of Euro-zone interest rates and the integration of fixed-income markets (Adjaouté and Danthine, 2003 and Hartmann et al., 2003). Another important dimension of the elimination of exchange rate risk across countries within the Euro area, as a result of the adoption of a single currency, is its effect on the dependence or co-movement of equity markets within the Euro area. The impact of the introduction of the Euro on the dependence of equity markets within Europe is an important issue with significant implications for portfolio diversification and thus asset management, risk management and international asset pricing. To assess this impact of the Euro, this paper provides a comprehensive analysis of the financial market co-movement of 17 European countries during the period 1994–2003 using a new econometric methodology.1 In particular, we directly assess financial market dependence or co-movement across countries by estimating time-varying copula dependence models for stock market indices following the methodology of Patton (2006a). As shown by Patton and explained in more detail in Section 3, copulas offer significant advantages over other econometric techniques in analyzing the co-movement of financial time series, consisting in the fact that they can model dependence beyond linear correlation and provide a high degree of flexibility. In particular, marginal distributions and the joint distribution can be considered separately, while traditionally, either the marginals or the joint distribution are arbitrarily specified as normal distributions. Consequently, copulas have recently become increasingly popular in various finance applications, such as modeling default correlations for credit risk management (Li, 2000), modeling portfolio allocations (Hennessy and Lapan, 2002), pricing foreign exchange rate quanto options (Bennett and Kennedy, 2004), pricing multivariate contingent claims (Rosenberg, 2003), and modeling time-varying dependence (Patton, 2006a and Patton, 2006b). Our paper contributes to the literature by proposing a more direct and general copula model for modeling time-varying dependence between the prices of financial assets. Specifically, the model uses a GJR-GARCH-MA-t specification for the marginal distributions and the Gaussian copula for the joint distribution. The dependence parameter in the copula function is modeled as a time-varying process conditional on currently available information, allowing for time-varying, non-linear relationships. The proposed methodology can be extended to a multivariate model, which is useful for portfolio and risk management. We successfully apply our time-varying copula model to the investigation of whether the introduction of the Euro was associated with a structural increase in the level of dependence between the equity markets in the Euro area. We find an increase in equity market dependence in the Euro area after the introduction of the common currency, but only for relatively large markets, i.e. in France, Germany, Italy, the Netherlands and Spain. The increase in equity market dependence starts around the beginning of 1998, when Euro membership was determined and the relevant information was released. 2 Consistent with Bekaert et al., 2005 and Goetzmann et al., 2005, who document a positive causality from market integration to market dependence, a likely source of the observed increase in equity market dependence around 1998 consists of the higher degree of integration between European financial markets and economies, although even without foreign exchange rate risk several remaining capital market imperfections, such as regulation, taxes, and transaction costs still prevent full integration. In particular, higher transaction costs and lower market liquidity are the main reasons that render smaller equity markets less attractive to institutional investors and thus represent important barriers to investment in and thus stronger co-movement of these markets. For non-Euro European countries, we find a rise in the dependence of the British and Swedish equity markets with the aggregate Euro-zone stock market, which is consistent with the interpretation that these countries may be expected to join the Euro in the future. The remainder of this paper is organized as follows. Section 2 discusses integration and dependence of financial markets in general and in the context of the Euro in particular, and it develops the hypotheses about the impact of the Euro on financial market dependence. Section 3 presents time-varying copula methodology in general, while Section 4 explains the implementation of the models used to test the hypotheses. The data used for the empirical analysis is presented in Section 5. Section 6 presents the empirical analysis and discusses the results. Finally, conclusions are stated in Section 7.