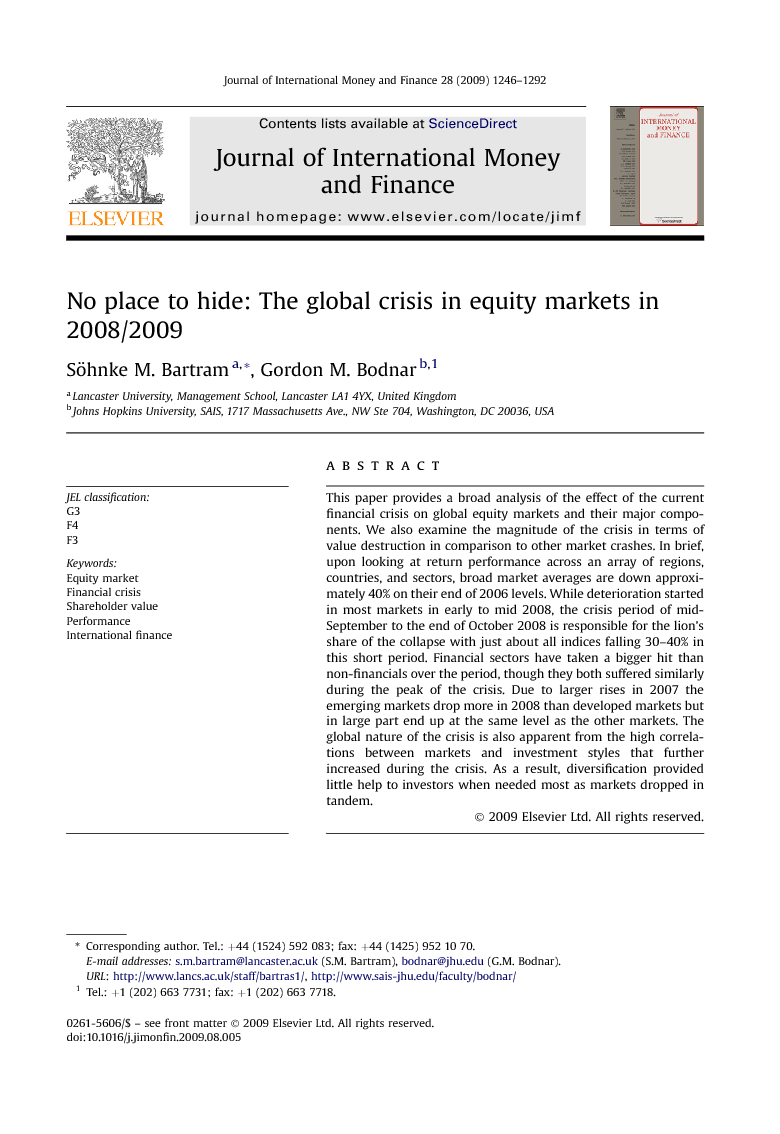 This paper provides a broad analysis of the effect of the current financial crisis on global equity markets and their major components. We also examine the magnitude of the crisis in terms of value destruction in comparison to other market crashes. In brief, upon looking at return performance across an array of regions, countries, and sectors, broad market averages are down approximately 40% on their end of 2006 levels. While deterioration started in most markets in early to mid 2008, the crisis period of mid-September to the end of October 2008 is responsible for the lion's share of the collapse with just about all indices falling 30–40% in this short period. Financial sectors have taken a bigger hit than non-financials over the period, though they both suffered similarly during the peak of the crisis. Due to larger rises in 2007 the emerging markets drop more in 2008 than developed markets but in large part end up at the same level as the other markets. The global nature of the crisis is also apparent from the high correlations between markets and investment styles that further increased during the crisis. As a result, diversification provided little help to investors when needed most as markets dropped in tandem.

At the beginning of October 2007, despite the tremors from early August, world equity markets measured at an all-time high USD market capitalization. According to Thomson's DataStream data, global equity markets had a market capitalization of more than $51 trillion as of this date. What happened over the next 17 months is nothing short of the largest destruction of equity value in history. By the end of February 2009, global equity market capitalization stood at just over $22 trillion, a drop of more than 56% and a reduction in equity value of more than $29 trillion. This loss in wealth to equity holders is equivalent in value to about 50% of global GDP for 2007. While financial crises are not a new phenomenon (see e.g., Allen and Gale, 2007 and Reinhart and Rogoff, 2009), the current financial crisis differs from many of the previously studied crises in that it is both severe and global. Although a major banking crisis (although not necessarily a global one as we shall see later), it has become a global financial market crisis. In the era of global markets and global investing, this crisis has challenged investors' recently gained perceptions about equity investing. The crisis has driven down equity levels across the globe, and in nearly every country, sector and industry. As a result some investors have been questioning previously held beliefs about the risk of equity investing and the benefits of global diversification. In the midst of this hand wringing, the purpose of this paper is to provide a detailed factual backdrop on how equity markets have behaved during a period encompassing the global financial crisis, ending in February 2009. To do this we will look at equity performance in a series of steps. First we will document the behavior of the global equity market since the beginning of 2007 focusing first on returns but also on volatility. When possible we will link significant economic or policy events from the crisis to the market reactions.2 We also investigate the breadth of the market decline by looking at different regional markets to see how widespread the collapse has been. We then try to put some historical perspective on the magnitude of the current decline by comparing it to previous declines in the long history of U.S. market returns and provide some analysis on the relative role of declining cash flow forecasts and increasing risk premia underlying the recent drop in equity values. Since the financial sector was ground zero for the crisis, we then examine the performance of the financial sectors versus the non-financial sectors as well as look at some evidence on the impact of the market turbulence on some basic style portfolio investing performance. Finally, we look at the impact of the crisis on return volatility measures and correlations both across regions and across sectors. The basic story that will arise is that while the mortgage and banking crises have been ongoing since early 2007, the equity market reaction was basically second order until July/August 2008, and the real equity market action (collapse) starts in the middle of September 2008 with the bankruptcy of Lehman and the bailout of AIG. From September 15 through late October nearly everything fell sharply. The impact was universal and severe. For most indices, these 31 trading days contain the majority of the decline for the year. By the end of 2008, with few exceptions, most equity indices were at 50% or less of their end of 2006 levels, and down 60% from their highs. Unfortunately, despite all of the financial advice about diversification, in this crisis equity investors had no place to hide. The paper is organized as follows. Section 2 discusses the overall market performance, while Section 3 tries to put the current market decline in historic perspective and attempts to decompose the decline into cash flow and risk premium effects. Section 4 looks at differences in equity performance at the financial sector relative to the non-financial sectors. Section 5 zooms in on performance at the major industry level, and Section 6 takes a look at performance within the financial industry that is at the heart of the crisis. Section 7 evaluates the impact of the crisis on some simple style portfolios, while Sections 8 and 9 focus on the behavior of market volatility and correlations. Finally, Section 10 summarizes and concludes.

A global equity market collapse of this magnitude raises a number of critical questions about financial markets. Much of the attention will be on the banking sector and its regulation, and the antecedents that lead to the crisis. However, even just with respect to the behavior of equity markets, there are issues at both the macro level and micro level to be considered. Some are new questions to consider, and others are existing ones that will need to be revisited. At the macro level, the global nature of this crisis allows researchers the opportunity to better understand the nature of the trans- mission of information shocks across global markets; the extent to which markets are behaving in an integrated or segmented fashion, and to the extent that there are differences in equity performance across countries, determining the economic sources of these differences (or lack thereof). Also because leverage in the system at the beginning of the crisis was so high, there is the interesting question of whether or how the coordinated (global) de-leveraging activities, which started in August 2007 and continued through the period, have affected market behavior. At the micro level there are questions relating tothe performance of specific trading strategiessuch as market neutral styles and the extent to which they offer some sort of protection or diversification to investors. Also, what influence if any did some of the policy choices have on market behavior, such as tying mark-to-market accounting to regulatory capital and temporary restrictions on short selling imposed in several countries. Undoubtedly, even equity market researchers will be busy examining this event for many years. Ultimately, there will be the impact that this financial crisis has on the strategy of global investing. The crisis drove down equity levels across the globe, and in nearly every country, sector and industry. Perhaps the biggest issue to arise out of this crisis will be how does one invest intelligently in a market where such events occur. It seems likely that many investors are questioning previously held views about the risk of equity and the benefits of global diversification. For many, diversification may need to be more broadly defined. Research and speculation on investment strategies for investors in the post- crisis world going forward will also be an important new areaTolookforward,oneneedstohaveaclearideaofwhathashappenedinthepast.Thispaperprovides a detailed factual backdrop on how equity markets have behaved during this most recent crisis, consideringthe performanceof theglobal equity marketoverthe past fewyears,inaggregateas well as by country and industry. In addition to performance, we investigate volatilities and correlations, and linksignificanteconomicorpolicyeventsfromthecrisistothemarketreactions.Insummary,theequity marketreactionisbasicallysecondordertothemortgageandbankingcrisesuntilJuly/August2008,and the real equity market action (collapse) starts in the middle of September 2008 with the bankruptcy of Lehman and the bailout of AIG. Equity markets around the world universally took a deep dive in the period from September 15 through late October. For most indices, these 31 trading days contain the majorityof thedeclinefortheyear.Bytheendof2008,withfewexceptions,mostequityindiceswereat 60% or less of their end of 2006 levels, and down 50% from their highs. Unfortunately, despite all of the financial advice about diversification, in this crisis equity investors had no place to hide