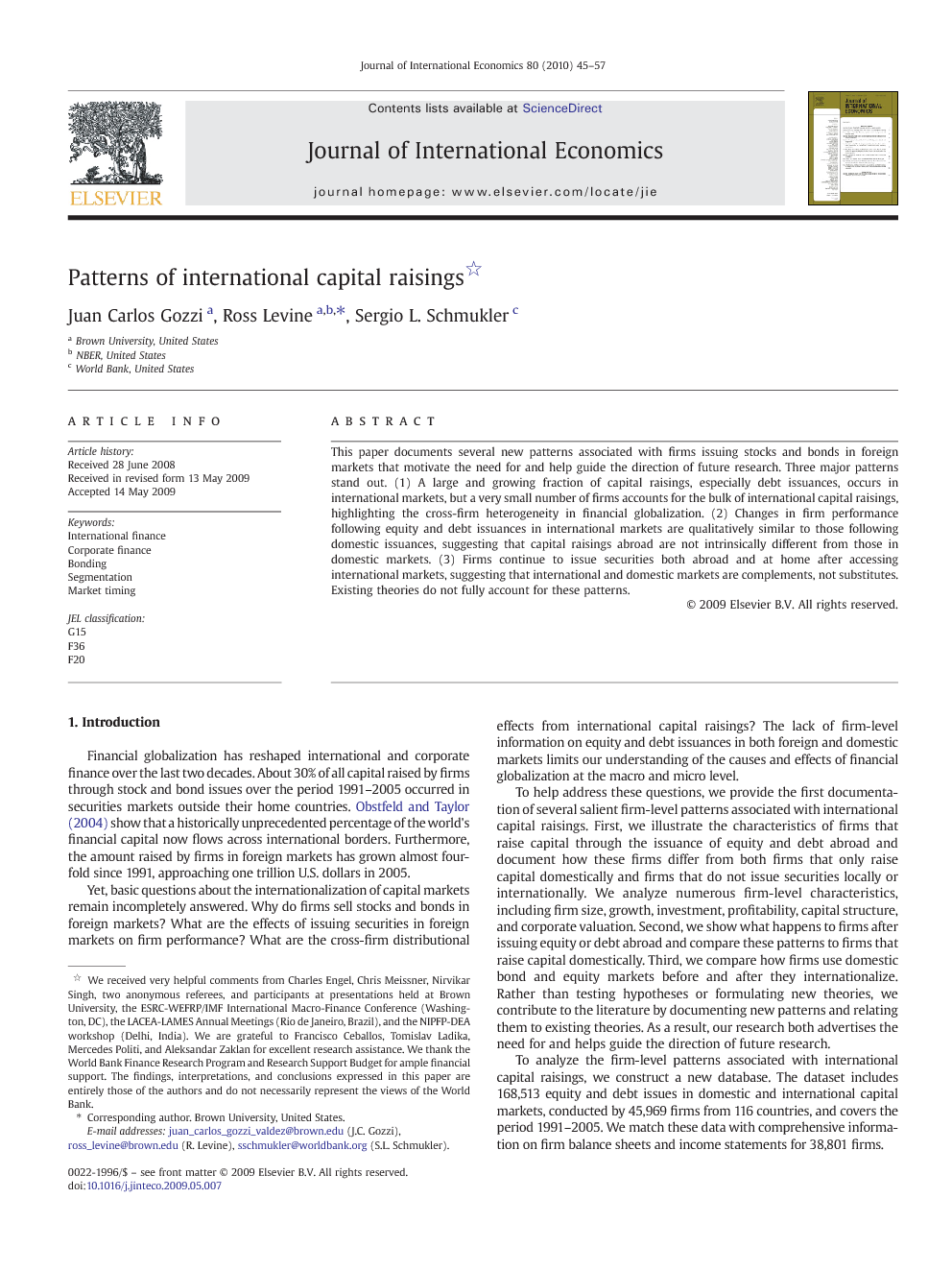 This paper documents several new patterns associated with firms issuing stocks and bonds in foreign markets that motivate the need for and help guide the direction of future research. Three major patterns stand out. (1) A large and growing fraction of capital raisings, especially debt issuances, occurs in international markets, but a very small number of firms accounts for the bulk of international capital raisings, highlighting the cross-firm heterogeneity in financial globalization. (2) Changes in firm performance following equity and debt issuances in international markets are qualitatively similar to those following domestic issuances, suggesting that capital raisings abroad are not intrinsically different from those in domestic markets. (3) Firms continue to issue securities both abroad and at home after accessing international markets, suggesting that international and domestic markets are complements, not substitutes. Existing theories do not fully account for these patterns.

In this paper, we characterize patterns of equity and debt issuance activities in domestic and international capital markets, and also document the dynamics of fi rm performance following these distinct corporate fi nancing activities. To do so, we compile a new database on worldwide capital raisings that allows us to compare fi rms that issue securities abroad with fi rms that issue securitiesdomestically. We also compare these capital raising fi rms with corporations that arelisted in the local stock markets but do not issue new securities over our sample period. This provides new fi rm-level information about the patterns of international capital raisings. Several fi ndings relate to existing theories of international fi nance and motivatefutureresearch.First,debtmarketsdwarfequitymarketsbothinterms of how corporations raise capital and in terms of the internatio- nalization of securities markets. Over the period 1991 – 2005, corporations raised almost four times more money through bond sales relative to equityissues.Moreover,bondsmarketsaremoreinternationalized.About 35% of all capital raised through debt issues was raised in markets other than the fi rm's home market, while the corresponding fi gure for equity issuesis10%.Sincemostempiricalstudiesof fi nancialglobalizationignore debt markets and since major theories, such as market segmentation, bonding, and market timing, focus on the cross-listing of equities and the integration of equity markets, our fi ndings (1) indicate that fi nancial markets are more internationalized than suggested by only considering equity markets and (2) advertise the need for additional work that accounts for the internationalization of debt markets. Second, while fi rms expand and invest more after raising debt or equity abroad, they (1) do not become more pro fi tableorexperiencean increase in valuation and (2) these changes in fi rm performance are qualitatively similar to the changes that fi rms experience when they issue debt or equity domestically. These fi ndings suggest that fi rms get bigger, but not necessarily “ better ” following internationalization. Furthermore, they suggest that capital raisings abroad are not intrinsi- cally different from capital raisings at home. While capital raisings abroad are bigger, the changes in fi rm performance following debt and equity issuance in international markets are broadly similar to those in domestic markets. These fi ndings are dif fi cult to reconcile with arguments that fi rmsaccessinternationalmarketstobondthemselves to a better corporate governance system because internationalization does not seem to spark enduring improvements in corporate perfor- mance that differ from the dynamics that follow domestic issuances. Third, fi rms continue to use domestic debt and equity markets after they raise capital abroad and indeed signi fi cantly expand their use of domestic securities markets. Thus, after fi rms internationalize, they issue debt and equity securities in both the domestic and foreign markets, using foreign markets for relatively larger issuances. These observations aredif fi cult to reconcilewiththe view that internationalmarkets provide less expensive capital, but there are high fi xed costs associated with initially accessing these markets (like satisfying international accountingand regulatory standards), such that fi rms only raise capital abroad after having incurred the entrycosts. These patterns also complicate the study of corporate fi nance since fi rms participate in multiple debt and equity markets simultaneously, which is not the focus of research on the determinants of corporate fi nancing choices. Finally, very few fi rms use international markets, and of the few that access international debt or equity markets, a very small number raise mostof thecapitalgarneredthroughthesaleofsecuritiesininternational markets. As emphasized by Levine and Schmukler (2006, 2007) , this suggests that fi nancial internationalization could have cross- fi rm distributional effects that affect those fi rmsthatrelysolelyonlocal markets. Firms that access international markets both grow relative to other corporations in the local market and account for a higher percentage of the total capital raised in domestic markets following internationalization. Future research could assess whether these changes affect the ability of smaller fi rms to obtain fi nancing for growth