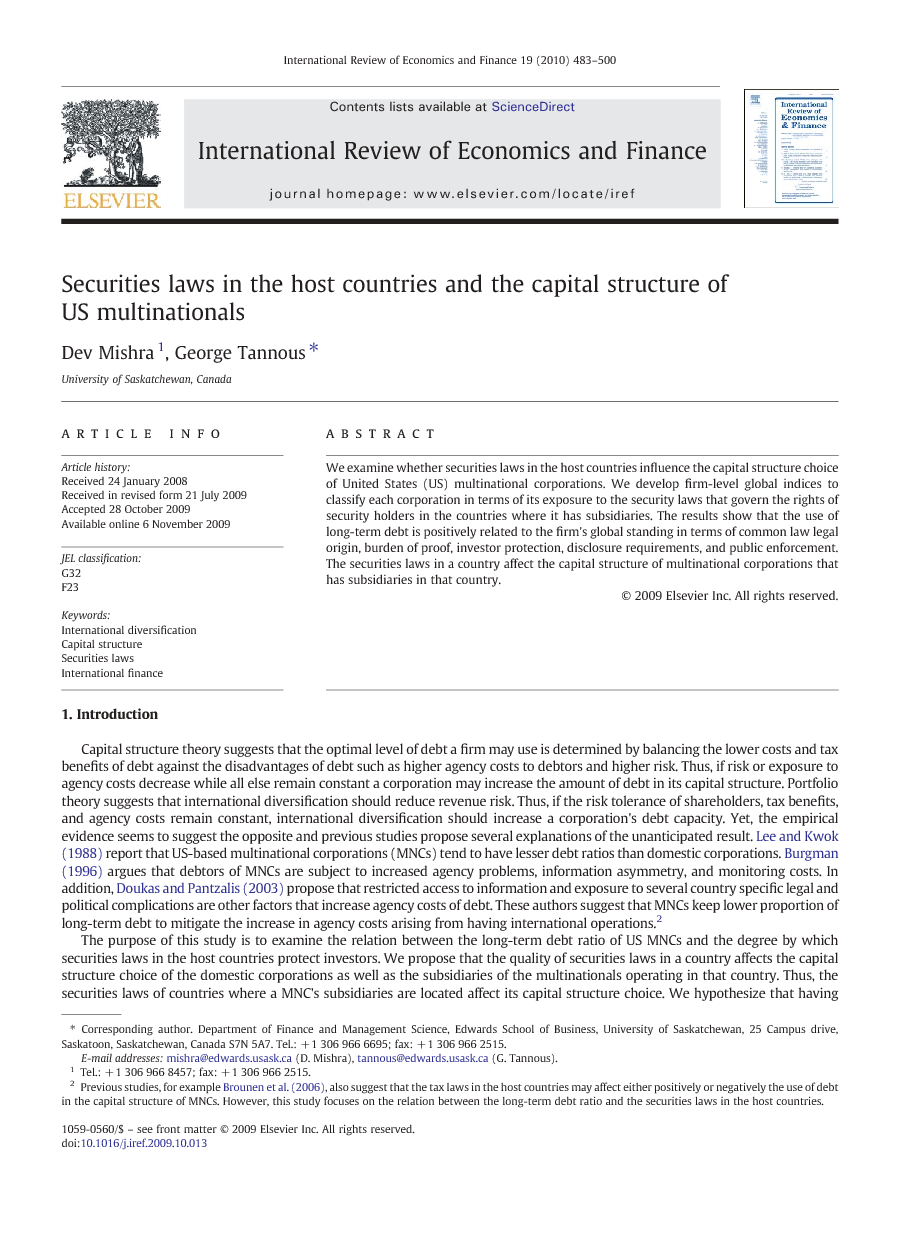 We examine whether securities laws in the host countries influence the capital structure choice of United States (US) multinational corporations. We develop firm-level global indices to classify each corporation in terms of its exposure to the security laws that govern the rights of security holders in the countries where it has subsidiaries. The results show that the use of long-term debt is positively related to the firm's global standing in terms of common law legal origin, burden of proof, investor protection, disclosure requirements, and public enforcement. The securities laws in a country affect the capital structure of multinational corporations that has subsidiaries in that country.

We examine whether the long-term debt ratios of US MNCs are related to the degree of investor protection provided by the securities laws of the countries where they have subsidiaries. The results show a positive relationship. A fi rm that is expected toexpand its operations (acquire a subsidiary) in a country with unfavorable securities legislation, for example poor disclosure requirements and investor protection, is likely to decrease the level of long-term debt in its capital structure. The results extend the literature in several ways. First, we extend the contributions of La Porta et al. (1998, 2006) by using their results to develop fi rm-levelindices andshowing thatthese indicesare related to the capital structure of MNCs.Second, we extend the results of Demirguc-Kunt and Maksimovic (1999) and Giannetti (2003) that the securities laws in a country affect the capital structureofdomestic fi rms. Weshowthatthesecuritieslawsof a countryalsoaffect thecapitalstructureofmultinationals thathas subsidiaries in that country. Third, the results con fi rm the fi ndings of Doukas and Pantzalis (2003) that multinational fi rms face higher agency costs of debt and they use less debt to mitigate the adverse impact of such costs. Fourth, we fi nd that the relation between the international diversi fi cation of a domestic fi rm and its long-term debt ratio varies depending on the securities laws in the countrieswhere diversi fi cation occurs. Therefore, studying this relationusing a sample of multinationals headquartered in one countryand anothersampleof multinationals headquartered inanothercountrymay not necessarily lead to the sameconclusions. This is perhaps why Doukas and Pantzalis (2003) report that the long-term debt ratios of US multinationals are negatively related to international diversi fi cation while Akhtar (2005) reports that the leverage of Australian multinationals does not differ signi fi cantly from the leverage of domestic Australian corporations. The fi ndingsofthisstudyshouldbeofinteresttopractitioners,corporatestakeholders,academics,andpolicymakers.Forpractitioners and corporate stakeholders, the fi ndings show the magnitude of changes in agency costs due to international diversi fi cation and suggest that expanding internationally has negative implications that should be considered against the bene fi ts. In particular, a decrease in the long-term debt ratio may increase the fi rm's cost of capital, which might result in a number of the fi rm's growth opportunities having lower net present values. Thus, managers need to understand these costs as well as the bene fi ts of the decision to expand internationally andshouldstrikethepropertrade-offbetwe en the two. For academics,the resultsimprove our understanding ofhow corporationsmake their fi nancingdecisionsandhowexpandinginternationallymayaffectthei rcostofcapital.Theresultscanhelppolicymakersaroundthe world in designing strategies and regulations to encourage foreign direct investment into their countries by reducing the agency costs expected by foreign investors. Finally, we suggest caution. Our analysis does not address the implications of the different tax regimes and investment incentives of different countries. It suggests that agency costs and the securities laws in the host countries are important in the decision to reduce the long-term debt ratio but the tax regimes and investment incentives in the host countries may have contributed towards the lower debt ratio. In some countries, for example in New Zealand, corporate taxes paid can be written off on a personal level up to the corporate amountofdividendspaid. 10 Atthemargin,thisstructuremayfavorequityoverdebtandthatmayleada fi rmexpandingintoNewZealand to decrease its long-term debt. This decrease is not related to agency issues. Considering the implications of the tax regimes is beyond the scope of this paper but should be a fertile area for future research.