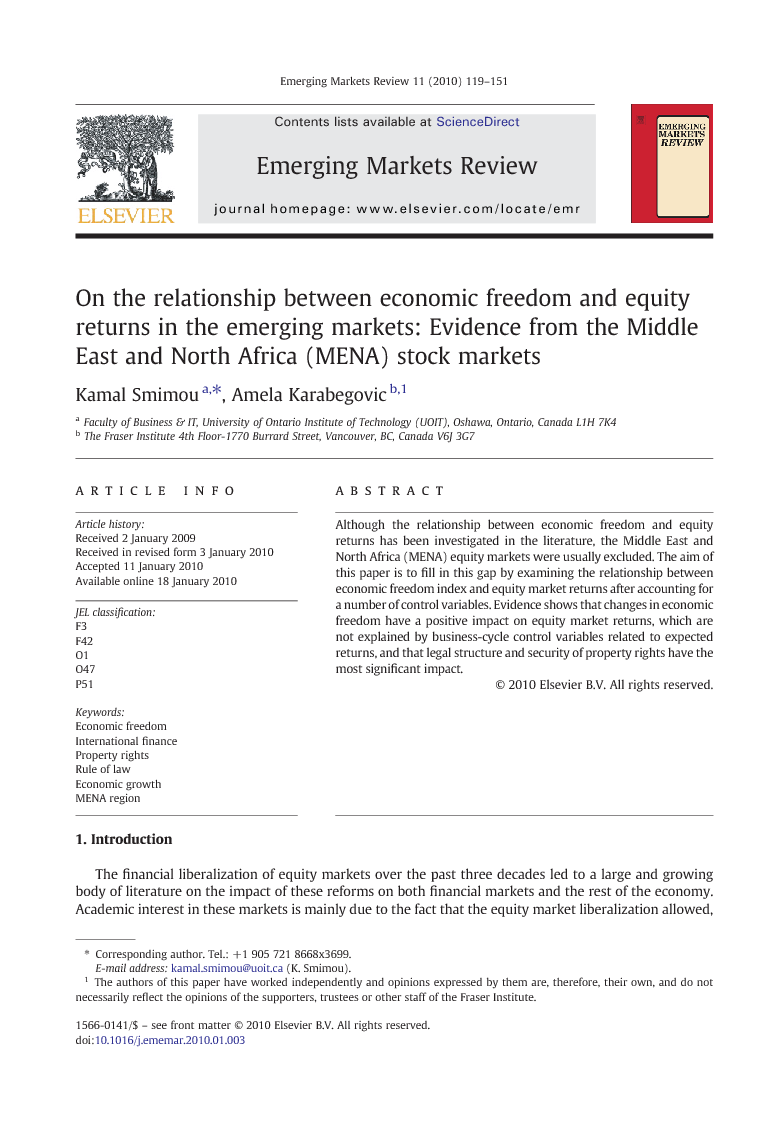 Although the relationship between economic freedom and equity returns has been investigated in the literature, the Middle East and North Africa (MENA) equity markets were usually excluded. The aim of this paper is to fill in this gap by examining the relationship between economic freedom index and equity market returns after accounting for a number of control variables. Evidence shows that changes in economic freedom have a positive impact on equity market returns, which are not explained by business-cycle control variables related to expected returns, and that legal structure and security of property rights have the most significant impact.

The purpose of this study was to investigate the impact of economic freedom on the stock market returns in eleven MENA stock markets from 2000 to 2007 and to determine which aspects of economic freedom components matter the most for stock market performance. Our fi ndings can be summarized as follows. First, we fi nd that changes in the overall level of economic freedom have a positive and statistically signi fi cant impact on equity returns. Second, the coef fi cients on economic freedom do not change much, either in magnitude or in signi fi cance, when we add a number of control variables. Whenwedisentangletheeconomicfreedomindexintoits fi veareas,we fi ndthatthelevelsofeconomic freedom of each area matter for stock market returns. However, only the changes in area 2, legal structure and security of property rights, are statistically signi fi cant. This result is consistent with Milton Friedman's comment on the importance of private property and the rule of law (see Gwartney and Lawson, 2003 ). Without a functioning legal system and entrenched property rights, economic freedom is undermined and the performance of stock markets is hindered. Fourth, in most of the regressions, the coef fi cient on the changes in area 2 does not change much, either in magnitude or in signi fi cance, when we add a number of control variables. In conclusion, the fi ndings in this study point to policy and practical implications that might be of interest to both academics and practitioners. From an academic perspective, this paper contributes to the areas of international diversi fi cation and global risk management (though this paper examines the time period prior to the current fi nancial crisis). Practitioners (and policymakers) can bene fi t from this research since it provides additional information and guidance on the management of international portfolios in the MENA region. One of the practical implications of the study is that investors can improve their stock portfolio performance by holding stocks in the economically freest economies in the MENA region. For investment fi rms, economic freedom can be added as an additional tool in addition to the optimal combination of risky and the riskless assets. By incorporating this dimension, another “ family ” of mutual funds, beyond just the optimal combination of risky assets and the riskless asset is being introduced. For instance, those optimal portfolios in those speci fi c countries — expected to show a high growth of their level of economic freedom — are tailored more to the needs of various clienteles. In fact, one can view this as though the fi nancial analyst is provided with an alternative scenario for consideration to the would-be investor. For assisting the analyst, the intuitive character of the method makes it versatile and easy to use by investment fi rm as an additional decision tool. Another implication of our study is that policy makers in the MENA region should take further steps to increase economic freedom in their nations with a strong focus on both the legal structure and security of property rights and size of government: expenditures, taxes, and enterprises category. A high level of economic freedom will provide countries with a higher degree of fi nancial integration with the outside capital markets. Currently, economic forces and demand for capital mobility have urged many nationstoward full fi nancial integrationto stimulate their domestic economies and supply capital for foreign direct investment (FDI).