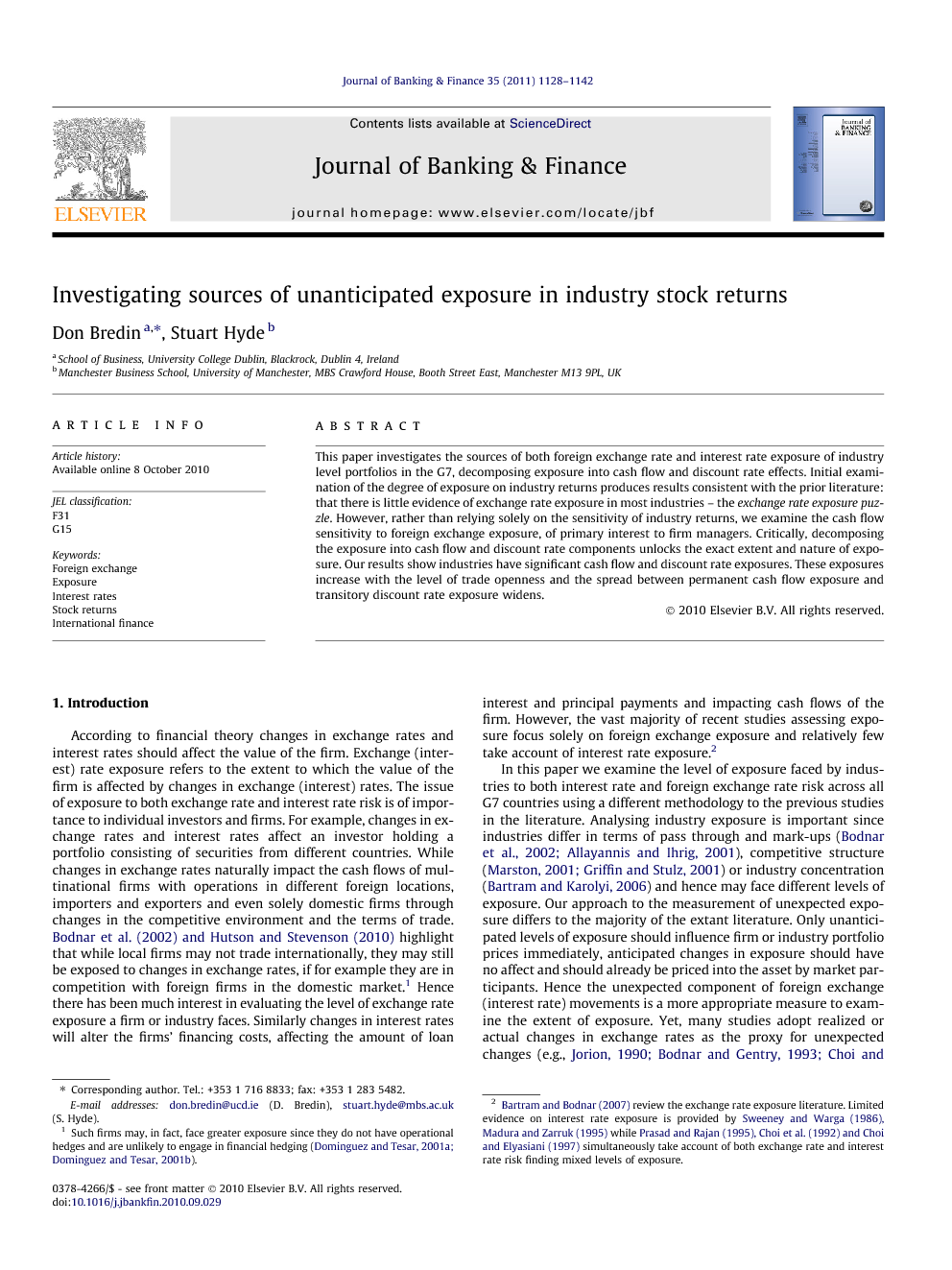 This study investigates the level of exchange rate and interest rate exposure faced by industries in the G7 economies. We specif- ically look to isolate two potentially critical issues for the exposure literature. First, our approach to the measurement of unexpected exposure differs to the majority of the extant literature. A number of theories based on the assumption of efficient markets would suggest that only unanticipated levels of exposure should influence firm or industry portfolio prices immediately. On the other hand, antici- pated changes in exposure should not affect firm or industry port- folio prices, but instead such information should already be priced into the asset by market participants. We adopt a forecasting ap- proach which is popular in the asset pricing literature to determine the level of unexpected exposure. Our approach may be viewed as an extension to the procedures adopted previously by Amihud (1994), Choi et al. (1992) and Gao (2000) . Our initial results indi- cate that this approach yields little in terms of identifying levels of direct exposure. The second critical element of our analysis is that we investi- gate the sources of both foreign exchange and interest rate expo- sure. It is only via the detailed examination of the possible channels of influence, that we can clearly observe the extent of the exposure and the degree of non-linearity. While the require- ment to decompose returns to examine exposure has been high- lighted by both textbook definitions of exposure (see Eiteman et al., 2010 ) and in the empirical literature (see Chow et al., 1997 ), there has been limited application in the exposure literature to date. The Campbell (1991) decomposition approach adopted here, although novel in this literature, has proven successful in the finance asset pricing literature. Our results for the direct effect of foreign exchange exposure applied to the industry portfolios across the G7 economies are weak, but consistent with those doc- umented previously in the literature. This would suggest that industries face little or no exposure to unexpected changes in ex- change rates. It is only when we adopt the beta decomposition that we identify the true extent of foreign exchange exposure. The level of foreign exchange exposure is dramatic once we take into account the channel through which the influence occurs. We find intuitively appealing results that open markets, such as Can- ada and Germany are particularly sensitive to foreign exchange exposure. However, we also find evidence of widespread foreign exchange exposure for US industries. The key issue from a cross country perspective is that the nature of the exposure differs. We have isolated the exposure of principal interest to managers, the cash flow beta, which represents transaction and operating expo- sure, and its relationship to the discount rate beta. In the majority of industry cases for the US, a Dollar appreciation has an adverse influence on future excess returns and this dominates any cash flow effect. Consistent signs are found for European G7 markets, but the influence on future cash flows dominates. The implication of the excess return channel bearing the brunt of the exposure in the US is that any negative effect on wealth is likely to be transitory and the investment opportunities into the future are likely to be positive. This finding for the US provides further indication of potentially why previous studies have been unable to uncover the extent of foreign exchange exposure. There is considerable var- iability in the sensitivity of G7 industry-wide exposures, although there is general consistency at the country level. The heterogeneity in foreign exchange exposures for open markets are particularly significant and again is consistent with the previous finding for in- ter-industry foreign exchange exposure. The influence of foreign exchange exposure appears to transmit via the cash flow channel for the more competitive and open markets. This is particularly the case for financials, consumer goods and industrialsWe establish the importance of the decomposition approach in uncovering the extent of cash flow and discount rate exposure for industries across the G7. We also provide some preliminary indica- tion to the determinants of these exposures. Future work should seek to examine whether the approach yields similarly significant results in firm level data and the determinants of these exposures.