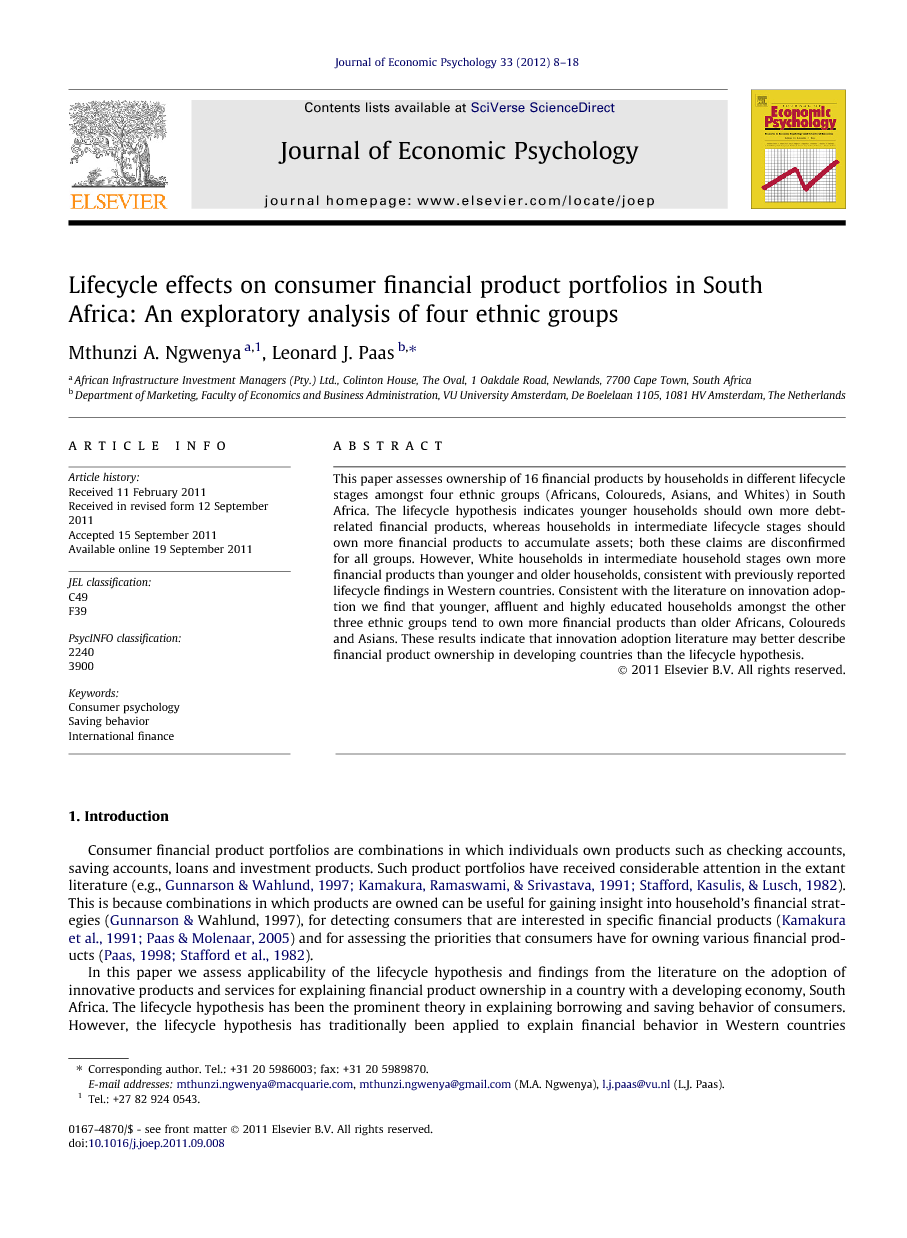 Consumer financial product portfolios are combinations in which individuals own products such as checking accounts, saving accounts, loans and investment products. Such product portfolios have received considerable attention in the extant literature (e.g., Gunnarson and Wahlund, 1997, Kamakura et al., 1991 and Stafford et al., 1982). This is because combinations in which products are owned can be useful for gaining insight into household’s financial strategies (Gunnarson & Wahlund, 1997), for detecting consumers that are interested in specific financial products (Kamakura et al., 1991 and Paas and Molenaar, 2005) and for assessing the priorities that consumers have for owning various financial products (Paas, 1998 and Stafford et al., 1982). In this paper we assess applicability of the lifecycle hypothesis and findings from the literature on the adoption of innovative products and services for explaining financial product ownership in a country with a developing economy, South Africa. The lifecycle hypothesis has been the prominent theory in explaining borrowing and saving behavior of consumers. However, the lifecycle hypothesis has traditionally been applied to explain financial behavior in Western countries (Browning and Lusardi, 1996 and Wärneryd, 1999), which we define as Northern America, Western Europe, Australia and New Zealand. It remains unclear whether the lifecycle hypothesis applies outside Western countries. In the theoretical section of this paper, Section 2, we propose that literature on innovation adoption may also explain financial product ownership outside Western countries, as financial products in newly emerging economies can be considered as innovations for most consumers (Roos et al., 2005 and Steenkamp and Burgess, 2002). Note that we provide one of the few studies of consumer financial behavior outside Western countries (cf. Davies et al., 2009 and Roos et al., 2005). Researching the relevance of theories, which were developed on data from Western countries only, in newly emerging economies not only provides insights into the generalizability of such theories but also knowledge about the conditions in which such theories apply or not (Burgess & Steenkamp, 2006). In an empirical study, we analyze a data set of 18,965 respondents from the four main ethnic groups in South Africa: Africans, Coloureds, Asians, and Whites - we use the generally accepted terms for these ethnic groups in South Africa, according to the South African Bureau of Statistics; www.statssa.gov.za, see also Steenkamp and Burgess (2002). The data indicate, for each respondent, ownership of seven products used for borrowing purposes, such as loans and mortgages, and nine products for saving or investing, such as savings accounts and stocks. Using data on age, marital status, and parental status, we define the lifecycle stages in line with Murphy and Staples’s (1979) lifecycle operationalization, with necessary adjustments to describe the South African context. We then apply the lifecycle phase of each respondent to predict household financial product portfolios among Africans, Coloureds, Asians, and Whites according to a segmentation technique, latent class analysis (LCA; Fernandez-Blanco et al., 2009, Oppewal et al., 2010 and Wedel and Kamakura, 2000). In our application, the LCA technique simultaneously segments households on the basis of their financial product portfolios and estimates the effects of household lifecycle phase and ethnic group membership on the likelihood for financial product portfolios to occur. On the basis of our findings, we consider the applicability of the lifecycle hypothesis in developing economies or, alternatively, the findings from the innovation adoption literature that are discussed below. Accordingly, in Section 2, we discuss the lifecycle hypothesis and its applicability in South Africa. In Section 2 we also discuss relevance of findings from the innovation adoption literature for financial product ownership in South Africa. In Section 3 we introduce our data set, describe the revised lifecycle coding that we apply, and discuss the conducted LCA analysis. Section 4 contains the results of this analysis, including the household financial product portfolios we found and the effects of lifecycle stage, ethnic group, educational level, and income on the occurrence of these product portfolios. We conclude with a discussion and implications of our findings, in Section 5.