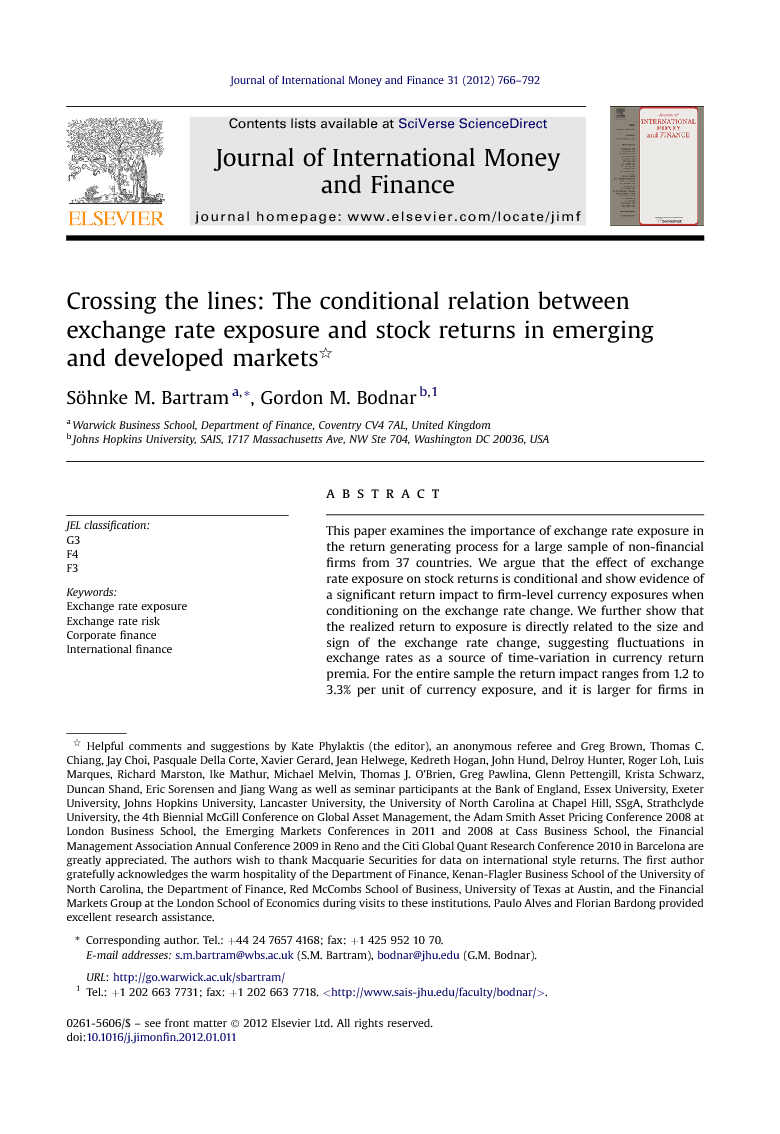 While a large bodyof researchhas focused on estimatingexchange rateexposures, with attention to either the percentage that are statistically signi fi cant and/or attempting to explain their cross-sectional variation, little attention has been given to the importance of exchange rate exposure for the stock return generating process. This paper offers a comprehensive study of the relation between foreign exchange rate exposures and stock returns based on a large sample of non- fi nancial fi rms from 37 countries around the world including the United States. The analysis is motivated by the observation that the existing literature has often perceived it as surprising that the stock returns of only few non- fi nancial fi rms are affected byexchange rates and that there is little evidence onwhetherexchange rate changes have a systematic effect on returns, and if so how large this effect is. Theresultssuggestthattherearenoticeabledifferencesintheeffectofexchangeratesonthereturns of fi rms across countries. In particular, 30 – 40% of fi rms in open and emerging market countries such as Brazil, South Africa, Indonesia, Argentina and Thailand are signi fi cantly exposed to foreign exchange rate risk. More importantly, we document that while there does not appear to exist an unconditional relation between exchange rate exposure and stock returns, such a relation does exist on a conditional basis, where the conditioning variable is the realized change in the exchange rate itself. The economic magnitude of this relation is signi fi cant, ranging from just over 1 – 3% per unit of exposure for local currency appreciations and depreciations respectively. The relation is more signi fi cant amongst emerging market fi rms, but present to a lesser degree for fi rm in developed markets as well (especiallyforlocalcurrencydepreciations).Theaveragereturnimpactinemergingmarketsisnearly8%perunitof exposure for local currency depreciations and 5.5% per unit of exposure for local currency apprecia- tions. For developed markets, the return impact averages only 2.5% per unit of exposure for local currency depreciations and is not signi fi cantly apparent for local currency appreciations. Given the increasing trend of globalization of business activities, these results have important implications for asset pricing, corporate fi nance and risk management. They suggest that investors should be cognizant of the fact that exchange rates are an important risk factor for fi rms and that this risk factor translates into non-trivial conditional return premia in most cases. While exchange rate changes are close to random, the impact of exchange rates on fi rm returns is unconditionally close to zero. However, the estimates of exchange rate exposure and the realization of the exchange rate index have consistent and predictable impacts on returns. From an economics standpoint, the paper demonstrates thatexchange rateexposure is animportant, systematic variable inthe return generating process. While the impact of exchange rates on returns could in principle stem from an effect on the fi rms ’ cash fl ows or discount rate, we show that the effect of exchange rate risk on stock returns must predominantly, if not exclusively, be an effect on the cash fl ows of a fi rm.