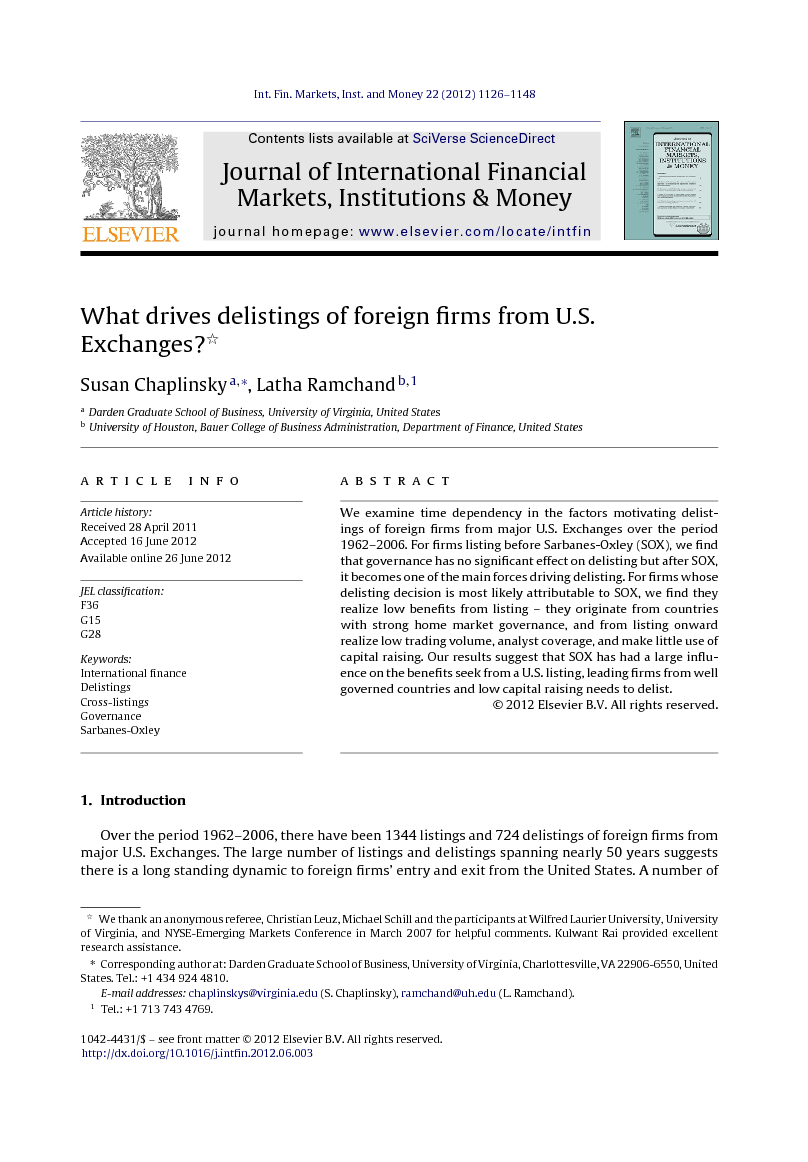 We examine time dependency in the factors motivating delistings of foreign firms from major U.S. Exchanges over the period 1962–2006. For firms listing before Sarbanes-Oxley (SOX), we find that governance has no significant effect on delisting but after SOX, it becomes one of the main forces driving delisting. For firms whose delisting decision is most likely attributable to SOX, we find they realize low benefits from listing – they originate from countries with strong home market governance, and from listing onward realize low trading volume, analyst coverage, and make little use of capital raising. Our results suggest that SOX has had a large influence on the benefits seek from a U.S. listing, leading firms from well governed countries and low capital raising needs to delist.

We examine time dependency in the factors motivating delistings of foreign firms from major U.S. Exchanges. Over the period 1962–2006, we investigate changes in firm, U.S. and home market characteristics that influence the net benefits of firms’ perceive to be associated with listing. Within an overall expectation that the net benefits of listing be positive, SOX brought about increased disclosure and compliance costs, which serves to offset the expected benefits of listing. To date the role and impact of SOX on firm behavior remains controversial–in part due to the difficulty of identifying the firms most susceptible to increased costs. We identify firms that formed their expectations of the net benefits of listing before SOX and then were caught off guard by the unanticipated increase in costs. If SOX is a large influence on firms’ perceptions of net benefits then it should alter the value firms’ place on governance. We hypothesize that if the main reason firms list in the U.S. is to gain the commitment of greater disclosure and the protection of investor rights, then by increasing the costs of compliance, stricter regulations like SOX should lead to the exit of firms from countries with strong governance and investor protection. We use a panel logit model that incorporates information from listing to delisting to estimate the probability of delisting before and after SOX. Holding firm specific, market characteristics, and governance constant, we find that governance does not significantly affect the probability of delisting for firms delisting prior to SOX, whereas firms delisting after SOX are significantly more likely to be from countries with strong governance. For firms caught off guard by the regulatory change, the costs of obtaining U.S. certification unexpectedly increases following SOX, leading those from stronger governance countries to exit the U.S. This is consistent with the bonding hypothesis where firms that value the certification associated with a U.S. listing (i.e., firms from countries with weak governance) are more likely to stay listed and firms that do not value such certification (i.e., firms from countries with strong governance) are more likely to delist when the costs of regulation increase. While a number of studies find that the firms delisting post-SOX are likely to be from countries with weak governance, our finding is more consistent with the observed fact that the majority of firms delisting post-SOX are from developed market countries with strong governance. Evidence consistent with SOX motivating delisting would be to find that the firms delisting after SOX are those just “over the bar” in benefits when costs unexpectedly increase due to SOX. Within this broader context, we find that the firms delisting post-SOX do not benefit from listing in terms of capital raising, analyst coverage, and trading volume to the same extent as the firms that stay listed. Our work does not examine why some firms are less able to generate benefits from listing but it is clear from the findings that listing itself does not automatically confer the benefits firms might have expected. This is an area where future work might usefully be directed. Our work is motivated by recognition that SOX has taken place in the context of a long-term secular trend toward greater global market integration. Some of the accompanying efforts to improve integration and transparency in non-U.S. markets have also likely reduced the relative attractiveness and net benefits of a U.S. cross-listing and hence affected delisting choices. While some of these efforts may partially explain our results, we conclude that SOX appears to be a significant enough force to prompt reassessment of firms’ listing decisions, leading those with strong governance at home and low net benefits from a U.S. listing to delist.