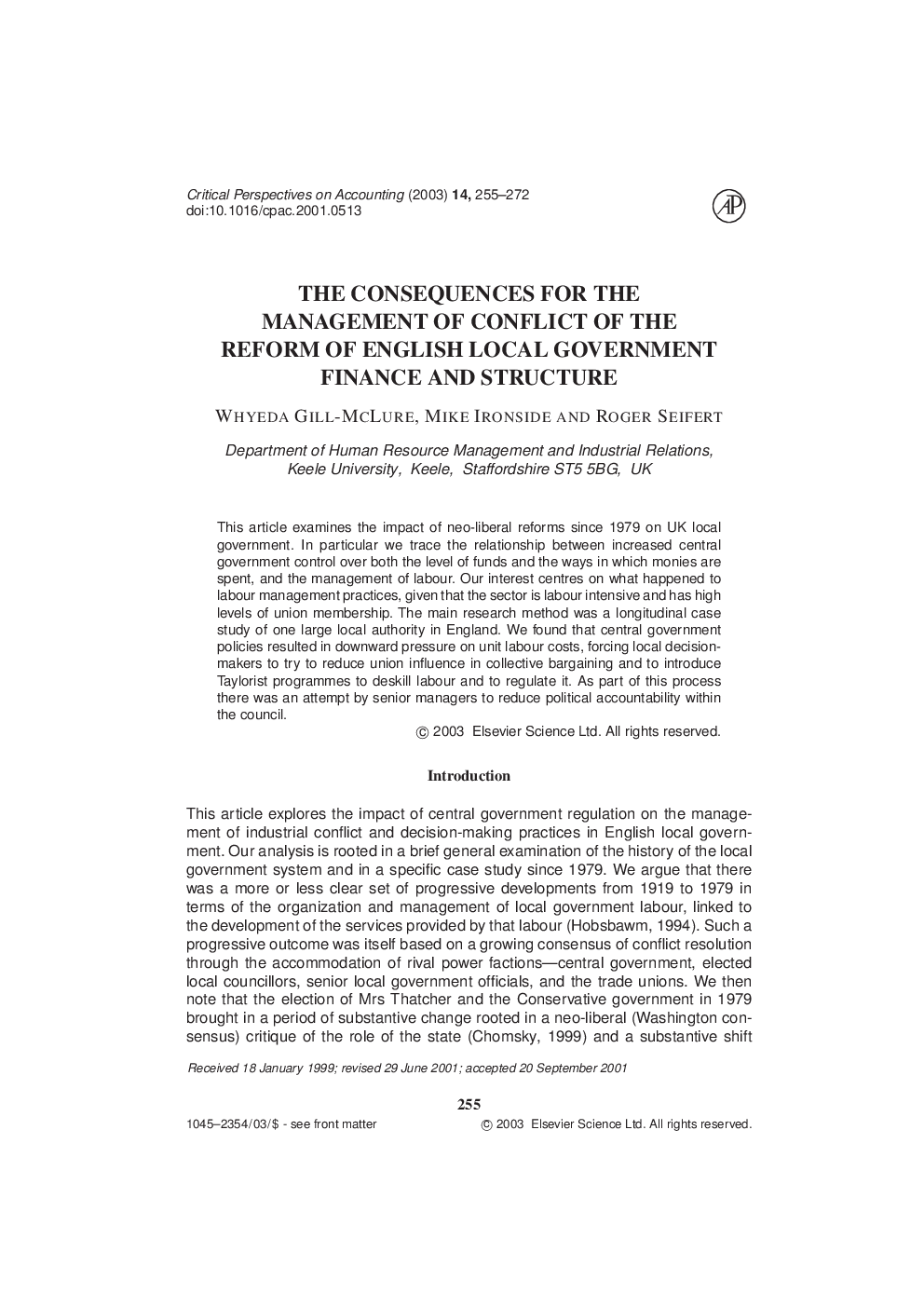 This article examines the impact of neo-liberal reforms since 1979 on UK local government. In particular we trace the relationship between increased central government control over both the level of funds and the ways in which monies are spent, and the management of labour. Our interest centres on what happened to labour management practices, given that the sector is labour intensive and has high levels of union membership. The main research method was a longitudinal case study of one large local authority in England. We found that central government policies resulted in downward pressure on unit labour costs, forcing local decision-makers to try to reduce union influence in collective bargaining and to introduce Taylorist programmes to deskill labour and to regulate it. As part of this process there was an attempt by senior managers to reduce political accountability within the council.

This article explores the impact of central government regulation on the management of industrial conflict and decision-making practices in English local government.Our analysis is rooted in a brief general examination of the history of the local government system and in a specific case study since 1979. We argue that there was a more or less clear set of progressive developments from 1919 to 1979 in terms of the organization and management of local government labour, linked to the development of the services provided by that labour (Hobsbawm, 1994). Such a progressive outcome was itself based on a growing consensus of conflict resolution through the accommodation of rival power factions—central government, elected local councillors, senior local government officials, and the trade unions. We then note that the election of Mrs Thatcher and the Conservative government in 1979 brought in a period of substantive change rooted in a neo-liberal (Washington consensus) critique of the role of the state (Chomsky, 1999) and a substantive shift to neo-classical market type reforms. These were aimed at centralizing decision making and pari passu reducing local government discretion, and at cheapening the costs of services through reducing both total and unit labour costs, primarily through cash limits, rate capping, and compulsory competitive tendering (CCT).This twin track approach could only be achieved by attacking the local government trade unions, weakening collective bargaining, and making the labour process more oppressive through the application of scientific management (Taylorist) techniques(Taylor, 1911; Ironside & Seifert, 2000). In turn this could only be brought about by increasing the pressures and regulations on local managers, both elected and appointed.The evidence to sustain our argument is based on primary and secondary sources for the long-term developments (Royal Commissions being an instance of the first and academic commentaries being an instance of the latter), set out in the next section of the paper. This provides a brief overview of the themes and issues that dominated the progressive phase of local government in England: more or less steady expansion of funding and functions; the professionalization and unionization of staff; the expansion of collective bargaining as the main mechanism for setting pay and conditions; the ambiguous concerns of the central state with regard to finance and control; and the growing influence of private sector managerialism.This is followed by a detailed case study of the impact of more recent changes in a large local authority. The case study builds on and develops earlier fieldwork carried out by one of the authors (Gill, 1994), and was based on interviews and observations between 1996 and 2000. It concentrates on the links between central government’s efforts to secure greater control over local decisions and the management of labour required to deliver that control, noting in particular that such efforts are impeded by both the resistance of the staff and the contradictory roles asked of senior managers.A major part of this since the early 1980s has been to tighten the grip on labour management in particular as the necessary condition for other changes such as contracting out of services. We analyse the imperatives placed on managers to cheapen labour costs which lead, ipso facto, to the degradation of local government labour through the imposition of human resource management (HRM) and total quality management (TQM) techniques, even in councils controlled by the Labour Party and where workforces are highly unionized (Foster, 1991; Colling, 1993, 1995). We suggest that such an approach offers a stronger explanation of changes in local government labour management practice than either Public Choice Theory (Dunleavy, 1991), New Public Management (Pollitt, 1993), or indeed the proponents of HRM and partnership (Kochan et al., 1986; Guest, 1995). While we do not engage in these debates here, we do recognize that by stating our line on labour process, which is firmly rooted in Braverman’s (1974) enduring analysis of the degradation of work, we are by implication both attacking those other methods of analysis and setting out an alternative to them.We conclude that as the conservative counter-revolution led to more damaging outcomes for local services so there were forged alliances of some staff and some managers to minimize the negative impact of policy while maintaining reasonable levels of compliance with audit. That since local government services are labour intensive a major arena for conflict, especially with high levels of union membership, became the management of labour through both control over the collective bargaining processes, and through attacks on the professional autonomy and skills base of many occupational groups to both cheapen their cost and improve their performance judged from an increasingly centralist definition of performance (Ironside & Seifert, 2000). The ensuing power struggles created and recreated management formations in order to meet these competing conflictual pressures within increasingly tight financial controls.

The “single-status” agreement lays down a single national pay scale, but allows for local determination of grading structures through a job evaluation scheme.Furthermore, it permits very wide variations from the nationally laid down minimum conditions. It thus provides increased scope for managers in individual local authorities to change grading and staffing structures and to change arrangements over working time, working patterns and the distribution of work between employees.These changes may or may not be subject to local bargaining, and the contrast with the earlier union struggles for centralized Whitleyism is strong (IRS, 1997; UNISON,1997).This paper has shown how the needs of the British capitalist state for 1919–1979 were best served, although not without some twists and turns, by a local government system which had some clearly identifiable features in terms of structure and funding. The sequence of reform was driven by the need to shape services and control them during a period of (mainly) expansion. Local authorities were managed by qualified senior professional staff, and services were organized and delivered by a mixture of specialist, administrative, clerical and manual workers. Those services were nationally regulated and nationally/locally funded, within a framework of limited local democracy and accountability. Nonetheless, the services provided in terms of assistance to both the local business community and local citizens grew and grew and with them the two tensions at the centre: control over costs, and control over labour in an increasingly complex, varied and highly unionized workforce whose conditions of service were generally determined through formal national collective bargaining.In the late 1970s a range of factors brought the era of expansion to an end. Britain’s economy underwent a transformation, with rapid shrinkage of the manufacturing sector, the growth of the finance and service sectors, and a falling position relative to the economies of other countries. The post-war consensus came unravelled, as the cold war ended and the western European economies no longer had to compete against the welfare provision offered to the citizens of the former socialist countries. This conjuncture of changing needs of British capital and a shift in the balance of power away from organized labour represented a major opportunity for the new Tory regime. With local government as its prime target,this government deployed its favoured instruments of cuts, legislation and HRM to achieve its aims of selling off assets and cheapening services. Our study shows that this was achieved in the face of opposition from many quarters, particularly from left councils and strong trade unions. It also shows that many features of the pre-1979 system remain intact—strong trade unions and well organized employers negotiating through the Whitley system, Labour councillors in control of many local authorities, and local authority managers and employees committed to providing services for the public. Labour management practice has shifted, and labour processes have been reconstituted, but the nature and extent of these changes has been shaped by councillors, managers, and unions who, in many cases such as in Northcity, have struggled to protect the integrity of both services and employment in local government. However, this is against the grain of the structural and financial reforms that have been, and are still being, driven through by central government as part of its “implicitly managerialist” programme (Brooks, 2000, 593) and the conversion of some managers to a born again management position (Wilson, 1999).