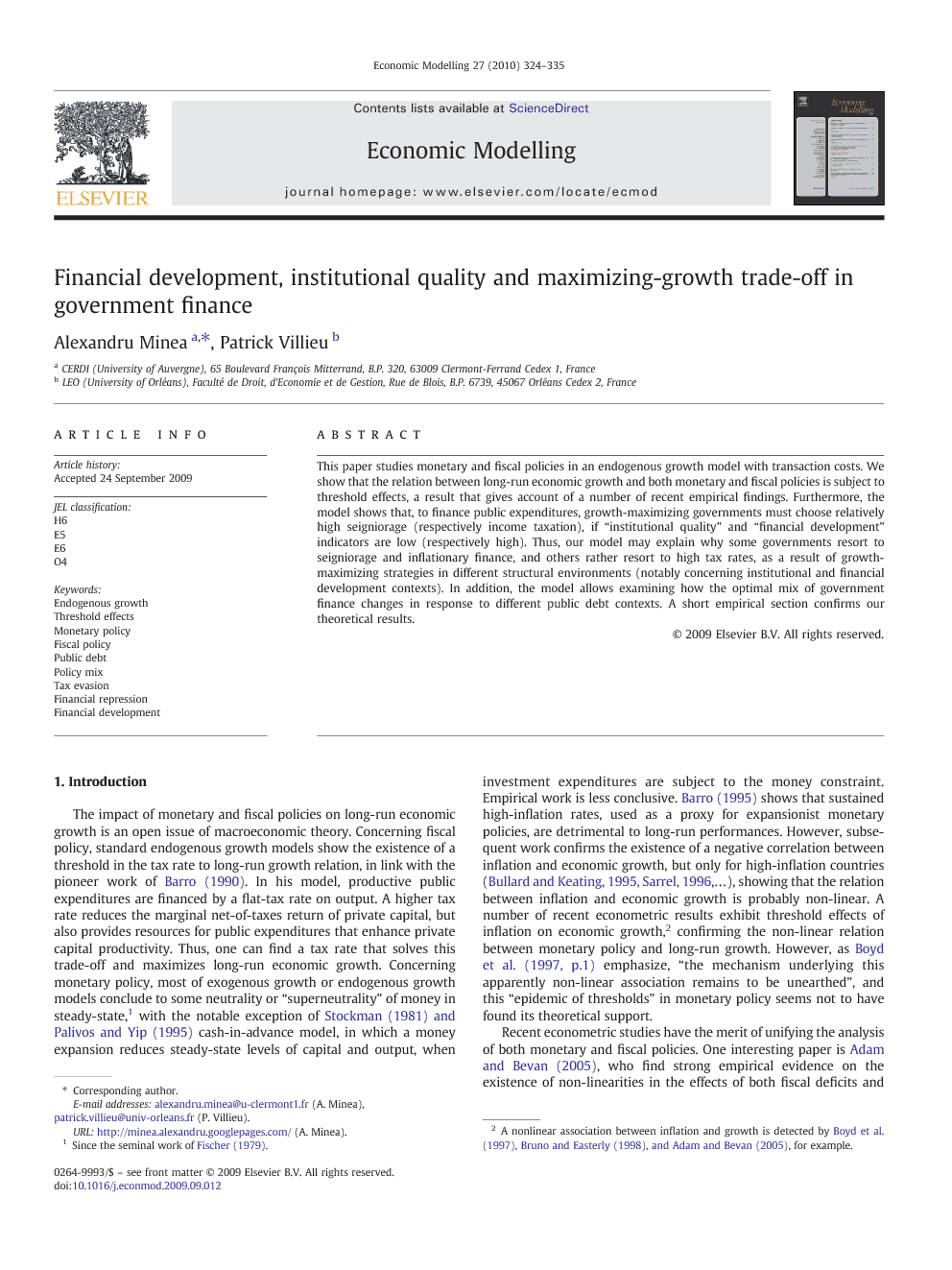 This paper studies monetary and fiscal policies in an endogenous growth model with transaction costs. We show that the relation between long-run economic growth and both monetary and fiscal policies is subject to threshold effects, a result that gives account of a number of recent empirical findings. Furthermore, the model shows that, to finance public expenditures, growth-maximizing governments must choose relatively high seigniorage (respectively income taxation), if “institutional quality” and “financial development” indicators are low (respectively high). Thus, our model may explain why some governments resort to seigniorage and inflationary finance, and others rather resort to high tax rates, as a result of growth-maximizing strategies in different structural environments (notably concerning institutional and financial development contexts). In addition, the model allows examining how the optimal mix of government finance changes in response to different public debt contexts. A short empirical section confirms our theoretical results.

The impact of monetary and fiscal policies on long-run economic growth is an open issue of macroeconomic theory. Concerning fiscal policy, standard endogenous growth models show the existence of a threshold in the tax rate to long-run growth relation, in link with the pioneer work of Barro (1990). In his model, productive public expenditures are financed by a flat-tax rate on output. A higher tax rate reduces the marginal net-of-taxes return of private capital, but also provides resources for public expenditures that enhance private capital productivity. Thus, one can find a tax rate that solves this trade-off and maximizes long-run economic growth. Concerning monetary policy, most of exogenous growth or endogenous growth models conclude to some neutrality or “superneutrality” of money in steady-state,1 with the notable exception of Stockman, 1981 and Palivos and Yip, 1995 cash-in-advance model, in which a money expansion reduces steady-state levels of capital and output, when investment expenditures are subject to the money constraint. Empirical work is less conclusive. Barro (1995) shows that sustained high-inflation rates, used as a proxy for expansionist monetary policies, are detrimental to long-run performances. However, subsequent work confirms the existence of a negative correlation between inflation and economic growth, but only for high-inflation countries (Bullard and Keating, 1995 and Sarrel, 1996,…), showing that the relation between inflation and economic growth is probably non-linear. A number of recent econometric results exhibit threshold effects of inflation on economic growth,2 confirming the non-linear relation between monetary policy and long-run growth. However, as Boyd et al. (1997, p.1) emphasize, “the mechanism underlying this apparently non-linear association remains to be unearthed”, and this “epidemic of thresholds” in monetary policy seems not to have found its theoretical support. Recent econometric studies have the merit of unifying the analysis of both monetary and fiscal policies. One interesting paper is Adam and Bevan (2005), who find strong empirical evidence on the existence of non-linearities in the effects of both fiscal deficits and seigniorage on economic growth. Unfortunately, economic theory provides only few global models for studying the effect of the fiscal and monetary policy mix on long-run economic growth, even if some papers deal with fiscal issues (see, for example, Ghosh and Mourmouras, 2004), or monetary ones (Palivos and Yip, 1995). Therefore, the aim of this paper is to analyze the impact of different economic policies (money creation, tax policy, public spending and public debt) on long-run economic growth in a global framework. To this end we develop the model of Minea and Villieu (2009a). This model allows for money financing of public spending in the Barro (1990) endogenous growth model with productive public spending, and (mainly) examines the case of a money demand based on a cash-in-advance (CIA) constraint (like Stockman, 1981 and Palivos and Yip, 1995). In the present paper, we extend this model to the presence of public debt; therefore, we consider a non-trivial government budget constraint in order to study the effect of alternative ways of government finance on long-run economic growth. Moreover, we suppose a more general money demand, based on a “transaction cost” technology, depending both on income and the nominal interest rate, and displaying the CIA form as a special case. In addition, we assume that part of tax revenue is subject to “collecting costs”, due to corruption, tax evasion, or, more generally, poor institutional quality. Similarly, we introduce an indicator of the “financial” or “banking” sector development, which is directly related to the capacity of collecting seigniorage revenues by the central bank. Effectively, in financially developed countries, most of seigniorage is retrieved by the banking system (the seigniorage on private deposits), and constitutes a “seigniorage flight” for the central bank, which can only collect the seigniorage on the monetary base (bank notes plus banks reserves). On the contrary, in financially repressed economies, most of seigniorage is collected by the central bank and can be used for government finance. Our results are the following. First, the model exhibits a threshold effect on long-run economic growth in both monetary and fiscal policies. While the threshold effect of fiscal policy is standard in Barro-type models, the threshold in monetary policy is less usual. In our model, seigniorage is used to finance growth-enhancing public spending. But increasing seigniorage also raises transaction costs, which damage private investment incentives and economic growth. As a result, we find an inverted-U relation between the money-growth rate and the long-run rate of economic growth, with a positive seigniorage ceiling. The existence of ceilings in both seigniorage and tax rates for long-run growth maximization involves a trade-off between the two policy instruments. To finance public expenditures, a growth-maximizing government must choose relatively high seigniorage (respectively income taxation) rates if “collecting cost” and “financial development” coefficients are high (respectively low). Thus, our model may explain why some governments resort to seigniorage and inflationary finance, while others rather resort to high tax rates, as a result of growth-maximizing strategies in different structural environments. Moreover we analyze the effect of public indebtedness on long-run economic growth and study how the policy mix is affected by the size of public debt. We show that higher public debt ratios are always growth detrimental, and that they increase the growth-maximizing rates of seigniorage and income taxation. The paper is organized as follows: Section 2 presents the model and computes the steady-state rate of economic growth. In Section 3, we study threshold effects of monetary and fiscal policies on long-run economic growth. Section 4 develops numerical results about the growth-maximizing policy mix, Section 5 provides some empirical evidence confirming our theoretical results and Section 6 concludes the paper.

In an endogenous growth model with transaction costs, we showed that the policy mix that growth-oriented governments should implement crucially depends on “collecting cost” (or more largely, on the quality of institutions) and “financial development” levels. Thus, our model may help to explain why some governments resort to seigniorage and inflationary finance, and others rather resort to high tax rate, as a result of growth-maximizing strategies in different structural environments. In addition, we have shown that the resulting policy mix positively associates seigniorage and income taxation to the public debt ratio. A short empirical section confirms the existence of three financing strategies (taxes-only, mixed and seigniorage-only). Choosing among these strategies is a matter of structural parameters (institutional quality and financial development) or depends on the fiscal stance (the public debt ratio), as illustrated for several countries. Our findings are consistent with empirical evidence concerning the role of financial repression or financial development on economic growth. For example, Giovannini and De Melo (1993) provide evidence of a high positive correlation between seigniorage and financial repression and find that these two variables are complementary. Similarly, Boyd et al. (1997) suggest that inflation is negatively correlated with indicators of financial development, but that this relation is subject to substantial non-linearities. Our model exhibits such a positive correlation between financial repression and seigniorage or inflation (owing to the fact that financial repression is negatively linked to financial development, as emphasized by Haslag and Koo (1999)), but as a result of growth-maximizing economic policies. Concerning the relation between tax systems and financial repression, Fry, 1988 and McKinnon, 1991 present evidence that inefficient tax systems and high tax evasion are associated with financial repression (see also Cukierman et al. (1992) or Roubini and Sala-i-Martin (1995)). All these papers empirically support a correlation between inefficient tax systems, large seigniorage and high-inflation rates, notably for developing countries, a correlation that our model establishes in a theoretical setup. The strong non-linear association between monetary and fiscal policies and economic growth that our model exhibits requires further empirical work, in the lines of Adam and Bevan (2005). Since the ceilings of seigniorage and income tax are functions of public debt and other parameters, our model puts the case for an empirical strategy that clearly purge regressions of policy indicators (such as the fiscal stance) or structural indicators (such as financial repression or financial development indicators), as do for example, Boyd et al. (1997). Such empirical tests of our model constitute interesting research topics for future work. Theoretical developments of our model may include analyzing welfare. On this point, the presence of transitional dynamics complicates the expression of intertemporal welfare to the point where simulations seem to be the only feasible method. Another extension of our theoretic model may involve the introduction of endogenous financial development and institutional quality indicators, in order to improve the micro-foundations of our analysis.