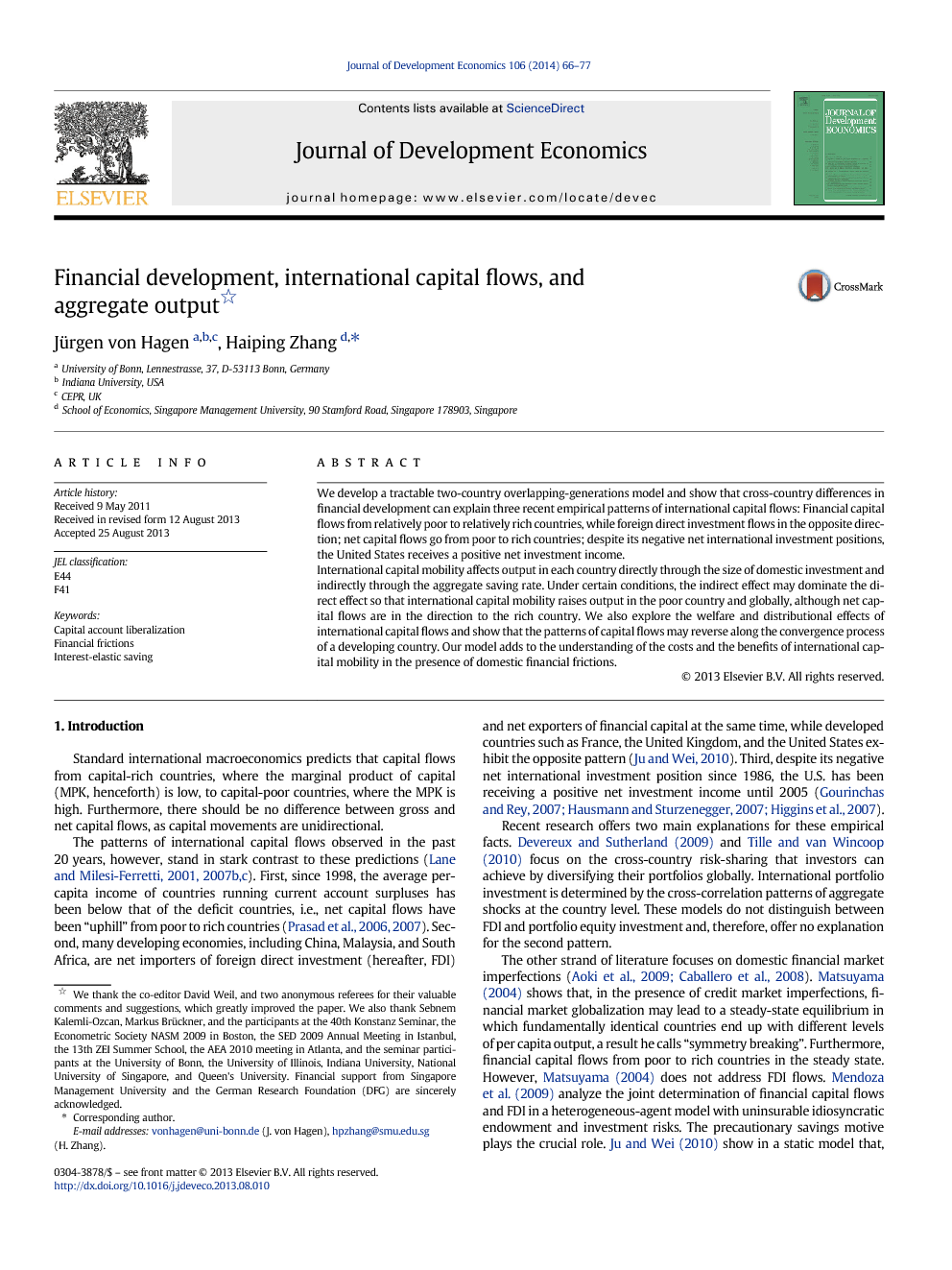 Standard international macroeconomics predicts that capital flows from capital-rich countries, where the marginal product of capital (MPK, henceforth) is low, to capital-poor countries, where the MPK is high. Furthermore, there should be no difference between gross and net capital flows, as capital movements are unidirectional. The patterns of international capital flows observed in the past 20 years, however, stand in stark contrast to these predictions (Lane and Milesi-Ferretti, 2001, Lane and Milesi-Ferretti, 2007b and Lane and Milesi-Ferretti, 2007c). First, since 1998, the average per-capita income of countries running current account surpluses has been below that of the deficit countries, i.e., net capital flows have been “uphill” from poor to rich countries (Prasad et al., 2006 and Prasad et al., 2007). Second, many developing economies, including China, Malaysia, and South Africa, are net importers of foreign direct investment (hereafter, FDI) and net exporters of financial capital at the same time, while developed countries such as France, the United Kingdom, and the United States exhibit the opposite pattern (Ju and Wei, 2010). Third, despite its negative net international investment position since 1986, the U.S. has been receiving a positive net investment income until 2005 (Gourinchas and Rey, 2007, Hausmann and Sturzenegger, 2007 and Higgins et al., 2007).

We develop a tractable, two-country, overlapping-generations model and show that cross-country differences in financial development can explain three recent empirical facts of international capital flows. International capital mobility may raise output at the country and the global level even when the less financially developed countries experience net capital outflows. The reason is that international capital flows not only lead directly to cross-country reallocation of aggregate saving but also trigger indirectly the adjustment along the consumption-saving margin. If aggregate saving is sufficiently interest-elastic, the indirect effect may override the prediction of conventional models in this literature, i.e., that net capital outflows from less financially developed countries raise output in these countries and globally. Output gains are more likely, the larger are gross compared to net capital flows and the larger the difference in the levels of financial development among the countries under consideration. An obvious question then is whether the patterns of international capital flows observed in recent years are indeed output improving. Our model suggests two empirical indicators to consider. The first is the development of labor productivity after a less financially developed country opens up to international capital flows. Our model suggests that output gains come with the gains of labor productivity and, hence, real wages in this country. The second is that output gains come with a narrowing of the gap between the rate of return on equity and the rate of return on financial assets (equity premium) in the less financially developed country.