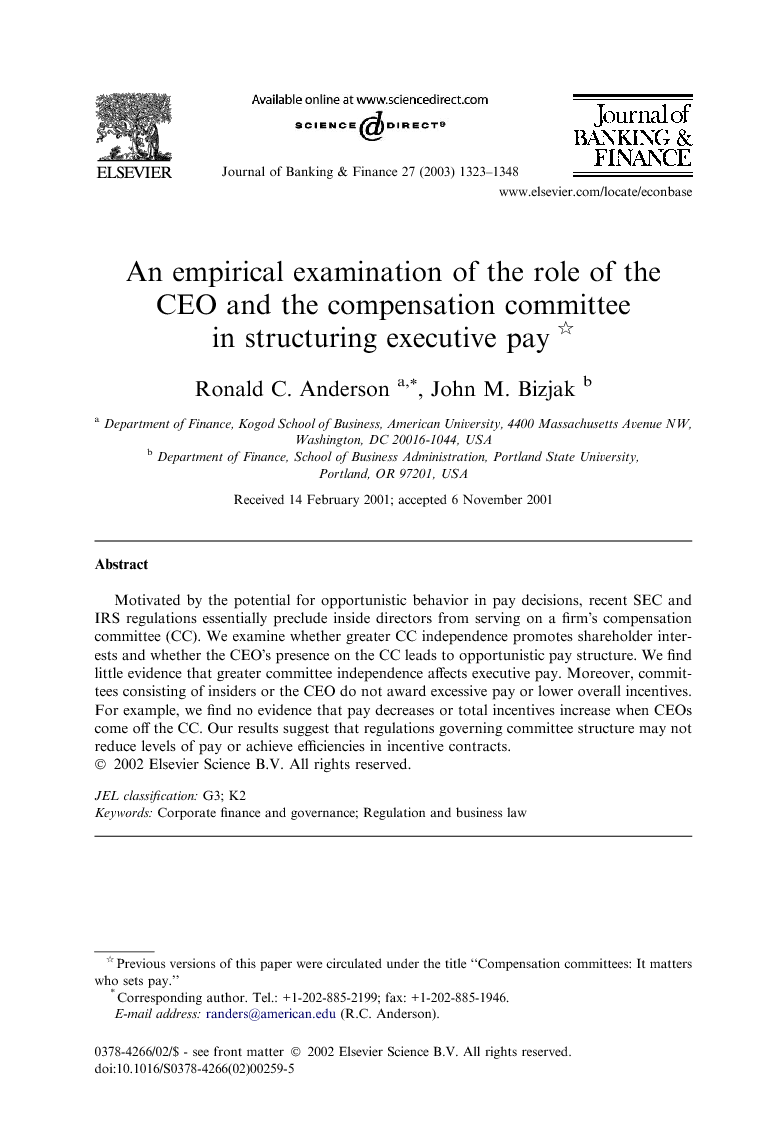 Motivated by the potential for opportunistic behavior in pay decisions, recent SEC and IRS regulations essentially preclude inside directors from serving on a firm’s compensation committee (CC). We examine whether greater CC independence promotes shareholder interests and whether the CEO’s presence on the CC leads to opportunistic pay structure. We find little evidence that greater committee independence affects executive pay. Moreover, committees consisting of insiders or the CEO do not award excessive pay or lower overall incentives. For example, we find no evidence that pay decreases or total incentives increase when CEOs come off the CC. Our results suggest that regulations governing committee structure may not reduce levels of pay or achieve efficiencies in incentive contracts.

Activist investors and institutional investors regularly call for reform in boards of directors and their subcommittees. The belief by these groups is that outside directors better serve shareholders. The view that outside directors are panaceas to potential agency conflicts resonates in recent regulatory and legal mandates that promote independent representatives on the CC. The concern over the makeup of the CC arises from that fact that executive pay is perhaps one of the most important contracting devices in the firm. Consequently, CCs that are not set up to optimally structure pay can impose enormous agency costs and inefficiencies on the firm. We find very little evidence indicating that CCs with greater outside-director representation use more performance-based pay. Pay mix, pay levels, and pay sensitivities are largely unrelated to committee independence. To the contrary, we find that the presence of insiders on the CC is associated with higher levels of CEO ownership. Thus, even with substantial insider representation on the CC, CEOs still have significant amounts of their wealth tied to shareholder performance. Most interestingly, we find no evidence that CEOs serving on their CC receive higher levels of pay or have lower overall incentives than CEOs who are not members of their CC. Finally, we find that pay neither falls nor total incentives increase when the CEO leaves the CC. In light of our findings, we express reservations about the need to regulate the structure of the board’s CC. The regulation may have unintended consequences such as preventing founder CEOs from sitting on the CC and providing input on subordinates’ pay packages. In addition, forcing the CEO or other insiders off the CC may also motivate CEOs to sell equity and force the board to use more equity-based pay. “Excessive” use of performance-based pay can lead to suboptimal investment (Lambert, 1986; Stein, 1989). Moreover, placing more emphasis on pay to align managers’ and shareholders’ interests can lead to other potential opportunistic behavior such as the timing of information releases around option grants (e.g., Yermack, 1997). Taking away flexibility in board design and contracting may result in suboptimal contracts and behavior and thereby impose contracting costs on the firm (Coase, 1937). Given that regulations generally impose costs on society and the firm, more evidence is needed to identify the benefits associated with the regulatory changes to warrant their implementation.