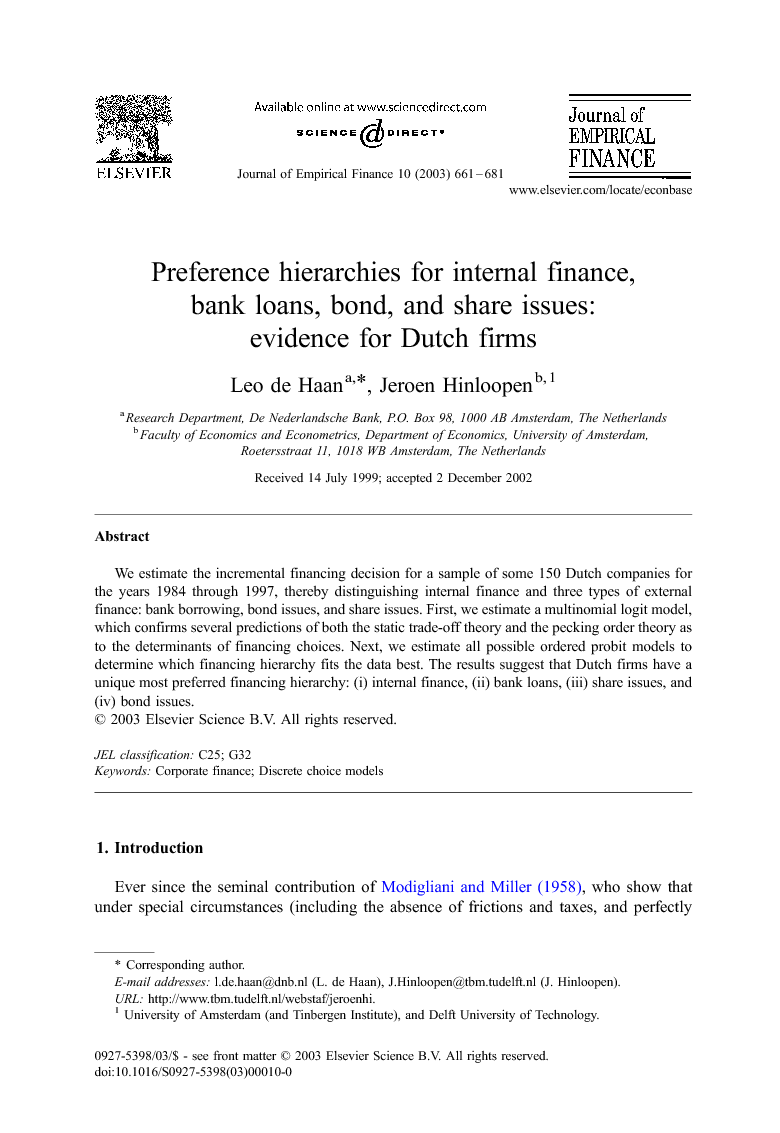 We estimate the incremental financing decision for a sample of some 150 Dutch companies for the years 1984 through 1997, thereby distinguishing internal finance and three types of external finance: bank borrowing, bond issues, and share issues. First, we estimate a multinomial logit model, which confirms several predictions of both the static trade-off theory and the pecking order theory as to the determinants of financing choices. Next, we estimate all possible ordered probit models to determine which financing hierarchy fits the data best. The results suggest that Dutch firms have a unique most preferred financing hierarchy: (i) internal finance, (ii) bank loans, (iii) share issues, and (iv) bond issues.

We analyse the determinants of the incremental financing choice for some 150 Dutch nonfinancial companies that are quoted on the Amsterdam Exchanges for the years 1984 through 1997. We thereby distinguish a broader range of financing types than is usual in the literature: internal finance, bank borrowing, bond and share issues. The inclusion of both internal finance and bank borrowing is especially relevant for the case of the Netherlands where bank loans are the most important source of external finance and where internal finance is the most important source of finance in general. This is confirmed by our estimation results in the sense that the internal finance and bank loan equations perform quite well from an econometric point of view. The estimation results indicate that the static trade-off theory and the pecking order theory are both of empirical importance in explaining the financial choices of our sample of companies, although not all aspects of both theories are confirmed. We then introduce a new methodology to specifically test whether a preferred hierarchy as to the type of incremental financing exists. In particular, we estimate ordered probit models for all possible financing hierarchies and compare these by means of a likelihood ratio test. This procedure yields a ranking of financing hierarchies in terms of the best fit to the data. The resulting ranking, which is also in concordance with the individual parameter estimates, shows that the most preferred hierarchy is very close to that predicted by the pecking order theory: Dutch firms prefer internal finance over external finance, and among the external financing types, they prefer bank loans over shares and shares over bonds. Indeed, the only difference with the pecking order hierarchy is that the preference order for shares and bonds is reversed. This low preference of Dutch firms for bonds could well be attributable to the relatively low level of development of the Dutch corporate bond market.