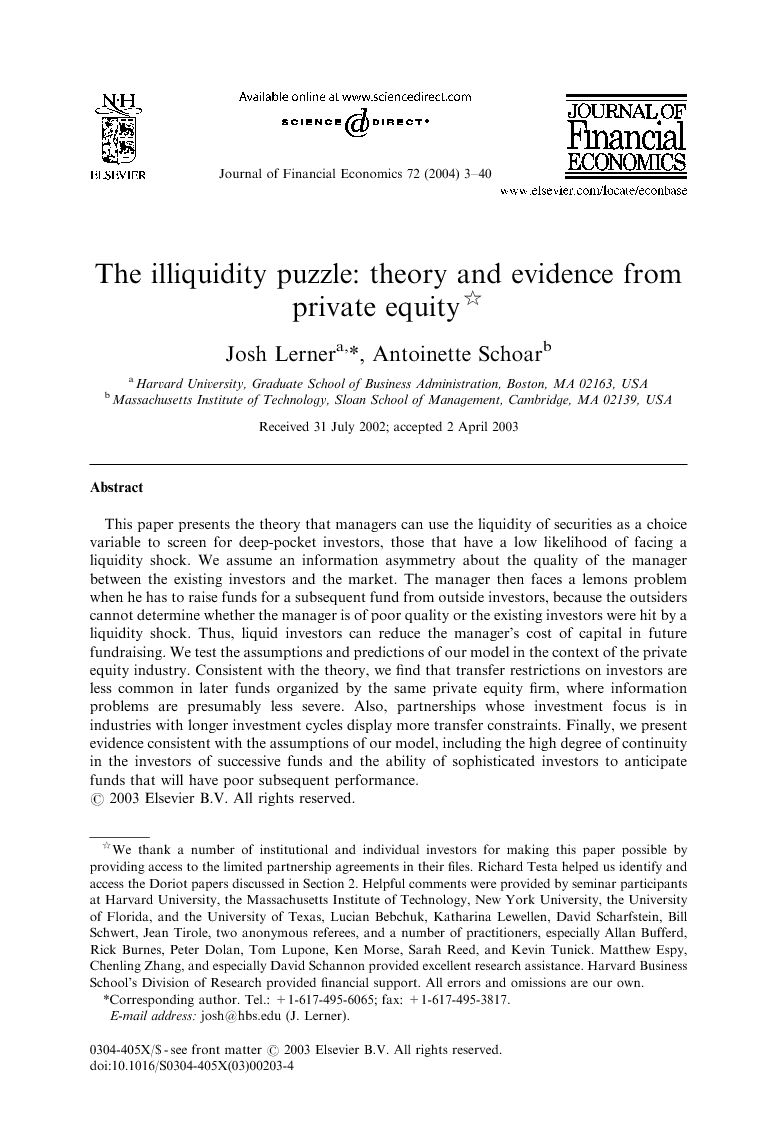 This paper presents the theory that managers can use the liquidity of securities as a choice variable to screen for deep-pocket investors, those that have a low likelihood of facing a liquidity shock. We assume an information asymmetry about the quality of the manager between the existing investors and the market. The manager then faces a lemons problem when he has to raise funds for a subsequent fund from outside investors, because the outsiders cannot determine whether the manager is of poor quality or the existing investors were hit by a liquidity shock. Thus, liquid investors can reduce the manager's cost of capital in future fundraising. We test the assumptions and predictions of our model in the context of the private equity industry. Consistent with the theory, we find that transfer restrictions on investors are less common in later funds organized by the same private equity firm, where information problems are presumably less severe. Also, partnerships whose investment focus is in industries with longer investment cycles display more transfer constraints. Finally, we present evidence consistent with the assumptions of our model, including the high degree of continuity in the investors of successive funds and the ability of sophisticated investors to anticipate funds that will have poor subsequent performance.

This paper examines the rationales for restrictions on liquidity. It suggests an alternative to the governance-based rationale traditionally offered for such curbs, focusing on the private equity industry. The model suggests that imposing restrictions on the liquidity of investor ownership stakes could enable managers, in our case GPs of private equity groups, to influence the composition of investors. We explicitly model liquidity constraints as a choice variable that allows the GP to alleviate the adverse selection problem in follow-on fundraising by screening for deep pocket investors. We test these predictions in the context of the private equity industry. We find that, consistent with our theory, funds that are less prone to asymmetric information have fewer transfer constraints. For example, later funds of the same private equity firm have fewer transfer constraints, consistent with the idea that these funds are less affected by information asymmetries, because the firm has established a track record. Moreover, funds that operate in industries with longer investment cycles have more constraints. Also, funds in the close-knit California private equity environment have fewer constraints than East Coast funds, where information could travel more slowly. We also present evidence consistent with the assumptions of the model. In particular, we show that the existing investors of a fund are able to obtain inside information about the quality of the partnership. The applications of these ideas are much broader and more general than the private equity setting. Many corporate finance transactions impose restrictions that are in excess of what are required by securities law. Exploring the extent to which some of these same rationales could be at work is a natural extension of this analysis. An understanding of these issues, however, is particularly urgent in the private equity industry. In the past few years, a surge of interest has been evident on the part of limited partners in liquidating their holdings. In some cases, these groups have sought to reduce their overall exposure to private equity; in other instances, they have sought to garner dry powder for further private equity investments (for a discussion, see Toll, 2000). As the theoretical analysis above suggests, such moves have the potential for very positive features, but also for substantial costs. Thus, gaining a better understanding of the trade-offs associated with liquidity is important to academics and practitioners alike.