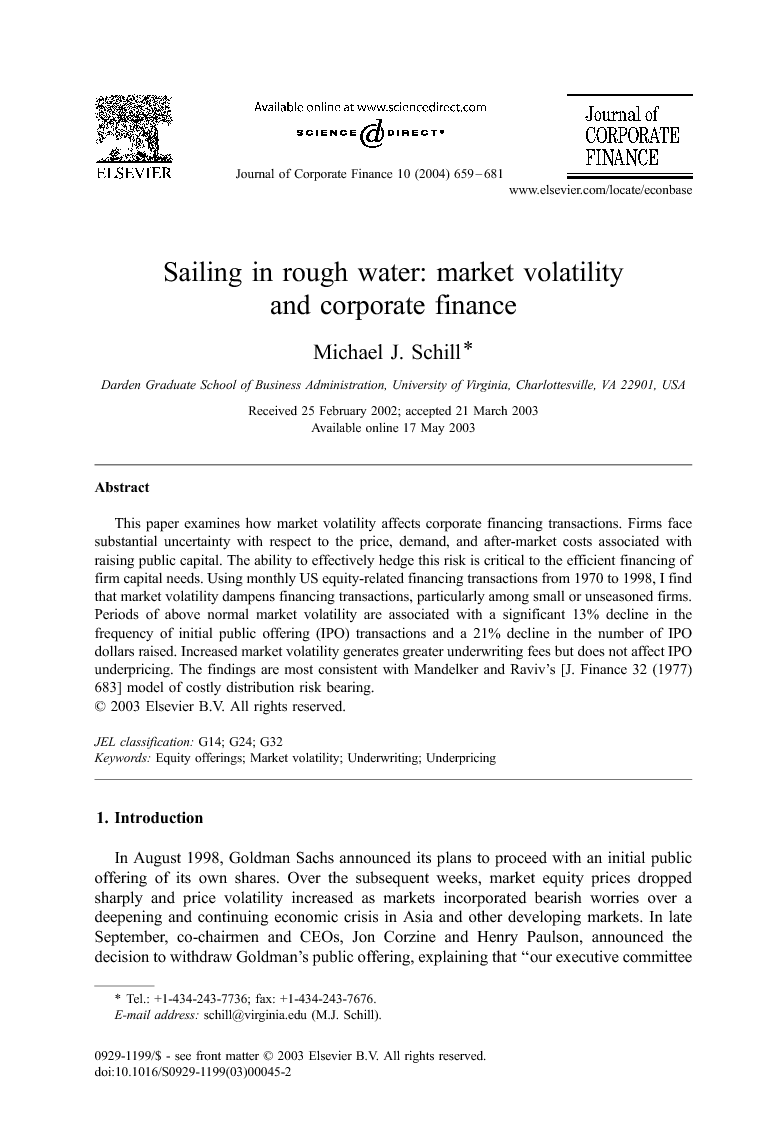 In August 1998, Goldman Sachs announced its plans to proceed with an initial public offering of its own shares. Over the subsequent weeks, market equity prices dropped sharply and price volatility increased as markets incorporated bearish worries over a deepening and continuing economic crisis in Asia and other developing markets. In late September, co-chairmen and CEOs, Jon Corzine and Henry Paulson, announced the decision to withdraw Goldman's public offering, explaining that “our executive committee made this difficult decision after giving full consideration to the volatile state of global financial markets and the disproportionately negative impact on the financial services sector…When market conditions improve, the executive committee may propose a new plan of incorporation and public offering to the partnership for its approval” (CNNfn, September 29, 1998; italics added). In the case of Goldman Sachs it is understandable that concerns regarding ownership dilution have an adverse effect on IPO timing following a sudden decline in market prices. It is less obvious, however, why an increase in volatility would affect the IPO decision of a firm that certainly has the capability to hedge market risk. The statement that volatility was a factor in the decision to withdraw the IPO for a financially sophisticated firm, such as Goldman Sachs, raises the question of how influential is market volatility in financing decisions for the economy at large. This paper examines how market volatility impacts corporate financing transactions. Using the standard net-present-value rule, managers fund new projects when the present value of future cash flows exceeds the value of claims sold to finance the project. In practice, however, managers face considerable uncertainty forecasting the value of claims sold to fund such projects. Corporate financing transactions are not single point in time events. The securities registration process often takes months to effect. Firms must begin a financing transaction not knowing the final price and demand for the securities offered, as well as the impact the financing will have on future financings. Since the value of claims sold to finance the project can change substantially over an extended contracting period, financing uncertainty can have an important effect on the financing decision. Underwriting contracts for security offerings provide a partial solution to this uncertainty. A variety of underwriting contracts are designed to accommodate preferences for structuring financing risk exposure. In a firm-commitment contract, the underwriter fully assumes the risk of distributing the securities. Price increases allow the underwriter to generate extra profits by exercising the overallotment option now common to underwriting contracts. Price declines require the underwriter to hold the unsold and stabilization shares in inventory (see Ellis et al., 2000). In contrast, best-efforts underwriting contracts or self-distribution contracts assign the distribution risk to the issuing firm. Other contract forms, such as stand-by contracts or Dutch-auction offerings provide hybrid forms of distribution risk exposure (see, Sherman, 1999). Uncertainty with respect to the after-market performance of the offering also maintains generates important implications for transaction parties. Strong price performance builds a favorable reputation among investors for both the underwriter and issuing firm for follow-on offerings (see Beatty and Ritter, 1986 and Booth and Smith, 1986 for underwriters and Welch, 1989 for issuing firms). Weak price performance not only jeopardizes the demand for follow-on offerings by the firm, but also increases the probability of legal liability for the underwriter (see Booth and Smith, 1986 and Tinic, 1988). Since Mandelbrat's (1963) initial work on price variation, there has been considerable evidence that stock market volatility varies over time.1 Although the implications of time-varying volatility have been extensively studied in the asset pricing literature, there is little understanding of the relationship between market volatility and issues of corporate finance. Choe et al. (1993) find that managers issue more debt relative to equity when market volatility is high. They argue that equity offering preference decreases with volatility due to the increased cost of offering distribution exposure during volatile periods. Their explanation, however, appears inconsistent with Bhagat et al. (1985) and Booth and Smith (1986), who find little correlation between underwriter compensation and contemporaneous market volatility. Using US equity and convertible-debt offerings between 1970 and 1998, I find that periods of high price volatility are associated with a significant reduction in corporate financing activity—particularly for unseasoned equity or small firms.2 During periods of above normal price volatility, the number of initial public offerings (IPOs) falls by a statistically significant 13% and the amount of IPO dollars raised falls by 21%. Market volatility also contributes to the frequency of aborted transactions. Seasoned equity and equity-linked debt are not significantly affected. I also provide evidence on the effect of market volatility on financing transaction terms. The evidence is most consistent with theories of costly distribution risk hedging, such as Mandelker and Raviv (1977). The findings provide novel evidence with respect to the IPO underpricing puzzle. Implications of the legal liability insurance hypothesis and reputational hypothesis, first proposed by Ibbotson (1975), receive little empirical support. This paper is organized as follows. Section 2 reviews the theory on the relationship between market volatility and corporate finance behavior. Section 3 presents the sample characteristics and test results of the impact of market volatility on corporate financing transactions. Section 4 details tests of the relationship between market volatility and financing transaction terms. Section 5 provides concluding remarks.

Market volatility has a significant impact on major corporate financing transactions. During periods of increased market volatility, firms tend to forego issuing new equity, particularly among small or unseasoned firms. Since equity offerings are much more sensitive to price volatility than debt offerings, the observations are likely to be due more to changes in financing behavior than real investing behavior. Consistent with MR's theory of costly offering distribution risk hedging, underwriters demand greater compensation during volatile periods. The finding that market volatility dampens equity financing encourages inquiry into the reasons why such risk exposure is so costly. The evidence also provides novel evidence with respect to the IPO underpricing puzzle. Implications of the legal liability insurance hypothesis and reputational hypothesis, first proposed by Ibbotson (1975), receive little empirical support. Understanding the linkage between market volatility and manager behavior deserves ongoing research attention. Contracts for other major corporate transactions, such as takeovers and divestitures, maintain similar risk-sharing features among participants. For example, the agreement on the form of compensation in the transaction, e.g., cash or stock, provides differing market risk exposure for both the buyer and seller. Lagerstam (1990) provides some discussion of price risk exposure for tender offer participants. Transaction derivatives, such as collars, caps, and contingent value rights, are often written into the contract to protect transaction parties from market risk. For these other corporate transactions the effect can be similar. As market risk increases the insurance requirement between parties becomes greater and firms become less likely to execute their transactions. Merger transactions expose one or both parties to market movements between the transaction agreement date and the closing date. For example, an acquisition agreement that stipulates an exchange of a fixed number of shares allows for large variation in closing transaction compensation, particularly during periods of high equity price volatility. If management is unable to hedge such exposure, the market for corporate control is expected to be adversely affected by market volatility. If such important functions of the capital market as capital allocation and asset control are adversely affected by market volatility, identifying market and management solutions to managing this exposure provides an important area for future research.