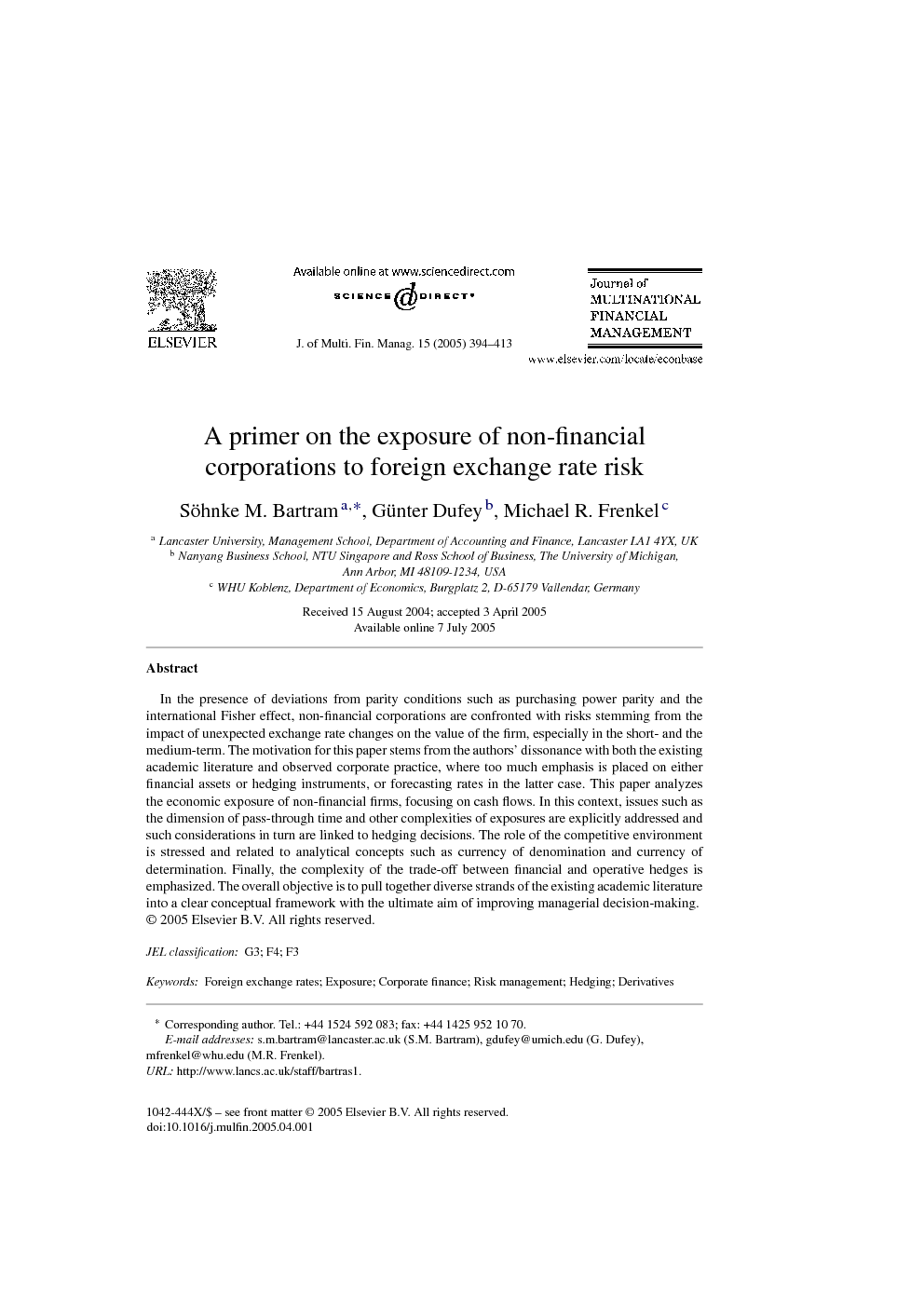 In the presence of deviations from parity conditions such as purchasing power parity and the international Fisher effect, non-financial corporations are confronted with risks stemming from the impact of unexpected exchange rate changes on the value of the firm, especially in the short- and the medium-term. The motivation for this paper stems from the authors’ dissonance with both the existing academic literature and observed corporate practice, where too much emphasis is placed on either financial assets or hedging instruments, or forecasting rates in the latter case. This paper analyzes the economic exposure of non-financial firms, focusing on cash flows. In this context, issues such as the dimension of pass-through time and other complexities of exposures are explicitly addressed and such considerations in turn are linked to hedging decisions. The role of the competitive environment is stressed and related to analytical concepts such as currency of denomination and currency of determination. Finally, the complexity of the trade-off between financial and operative hedges is emphasized. The overall objective is to pull together diverse strands of the existing academic literature into a clear conceptual framework with the ultimate aim of improving managerial decision-making.

Foreign exchange rate changes represent an important source of risk for non-financial corporations. Spectacular losses or even bankruptcies over the last decade and longer have drastically demonstrated the consequences of unprofessional management of these risks.1 With the emergence of large currency blocs with their own, internally focused macro-economic policies, together with the parallel rise in the international involvement of firms (usually referred to as “globalization”), and the opening of markets through more liberal trade policies and the technology-driven reduction in transportation costs, the number of firms impacted directly or indirectly by exchange rate changes has dramatically grown. Corporate foreign exchange risks began to attract widespread attention during the 1970s when the Bretton Woods system of fixed exchange rates unraveled. The subsequent rise in volatility of exchange rates and interest rates fostered a burst of financial innovation, exemplified by the proliferation of derivative instruments and their increasing use by corporations in all industry sectors (see e.g., Bartram et al., 2004 and Bodnar et al., 1998). Derivatives can be quite efficient hedging instruments for corporate risk management. Nevertheless, they can be quite complex as well, with strong leverage effects. Consequently, the use of these instruments carries with it high risks – both for the unsophisticated user, as well as for executives tempted by gambling with their shareholders’ money. In contrast, when properly used for hedging, derivatives or various other financial transactions can reduce those risks of non-financial firms for which they are not rewarded in the market. Since the term “hedging” is widely misused in practice, a clear conceptual foundation is key to management action consistent with the objective of firm value maximization. Hedging requires first and foremost an understanding of the underlying risk position: it means creating a position to offset an exposure. A hedge can be implemented either in the cash market or with derivatives. In contrast, “speculation” means taking actions in view of an explicit or implicit forecast that deviates from that of the market (as revealed, for example, by forward rates or interest differentials in functioning markets). In other words, a good test of whether an action involves hedging or speculation is the presence or absence of a causal relationship to the underlying exposure of the firm. This consideration focuses the agenda firmly on the definition and estimation of the exposure of firm value due to unexpected exchange rate changes. Here is where problems begin: the literature offers three definitions of exposure, namely accounting, transaction and economic (or “cashflow”), but only the latter is consistent with financial theory. The use of alternative measures such as accounting or transaction exposure is largely prompted by management incentive issues (e.g., bonuses are paid on the basis of reported earnings) associated with the reliance on accrual accounting based on historical cost. For the last 30 years, these issues have been addressed in many diverse publications, but the various facets of economic exposure are distributed throughout a vast literature. The purpose of this paper is to pull together all relevant strands of the literature and to present a comprehensive analysis of economic foreign exchange rate exposure, including an explicit consideration of the time dimension that is relevant in this context. Last but not the least, we provide some cogent and consistent implications for corporate hedging policies, including fundamental considerations regarding the choice of hedging instruments. To this end, the remainder of the paper is organized as follows. Section 2 briefly reviews the definition of exchange rate exposure. Section 3 examines exchange rate effects on non-financial firms competing in export or import markets. Section 4 focuses on additional aspects of foreign exchange rate exposure resulting from basically indirect effects of unanticipated foreign exchange rate changes on the profitability of firms. From the analysis of the various dimensions of exposure, Section 4 derives implications for managerial action such as debt denomination and duration structuring, the use of derivatives and other hedging activities. Finally, Section 5 presents the conclusion of the analysis.

In the presence of deviations from parity conditions such as purchasing power parity and the international Fisher effect, non-financial corporations are confronted by risks stemming from the impact of unexpected exchange rate changes on the value of the firm. Nevertheless, professional firm-wide risk management does not yet seem to be in place at all non-financial institutions. Consequently, the need for implementing or improving risk management systems appears especially strong for firms outside the financial sector. To this end, the lack of focus on economic foreign exchange rate exposure exhibited by such firms justifiably deserves criticism. This is so particularly at a time when risk management has become even more important in light of the globalization of business activities, with increased competition and lower profit margins. This paper therefore analyzes the economic exposure of non-financial firms, focusing on cash flows. In this context, the time dimension and other complexities of exposures are explicitly addressed. These considerations are then linked to corporate hedging decisions broadly defined. The role of the competitive environment and the relevance of concepts of currency of denomination and currency of determination are emphasized. The paper provides clear conceptual foundations with the aim of improving managerial decision-making.