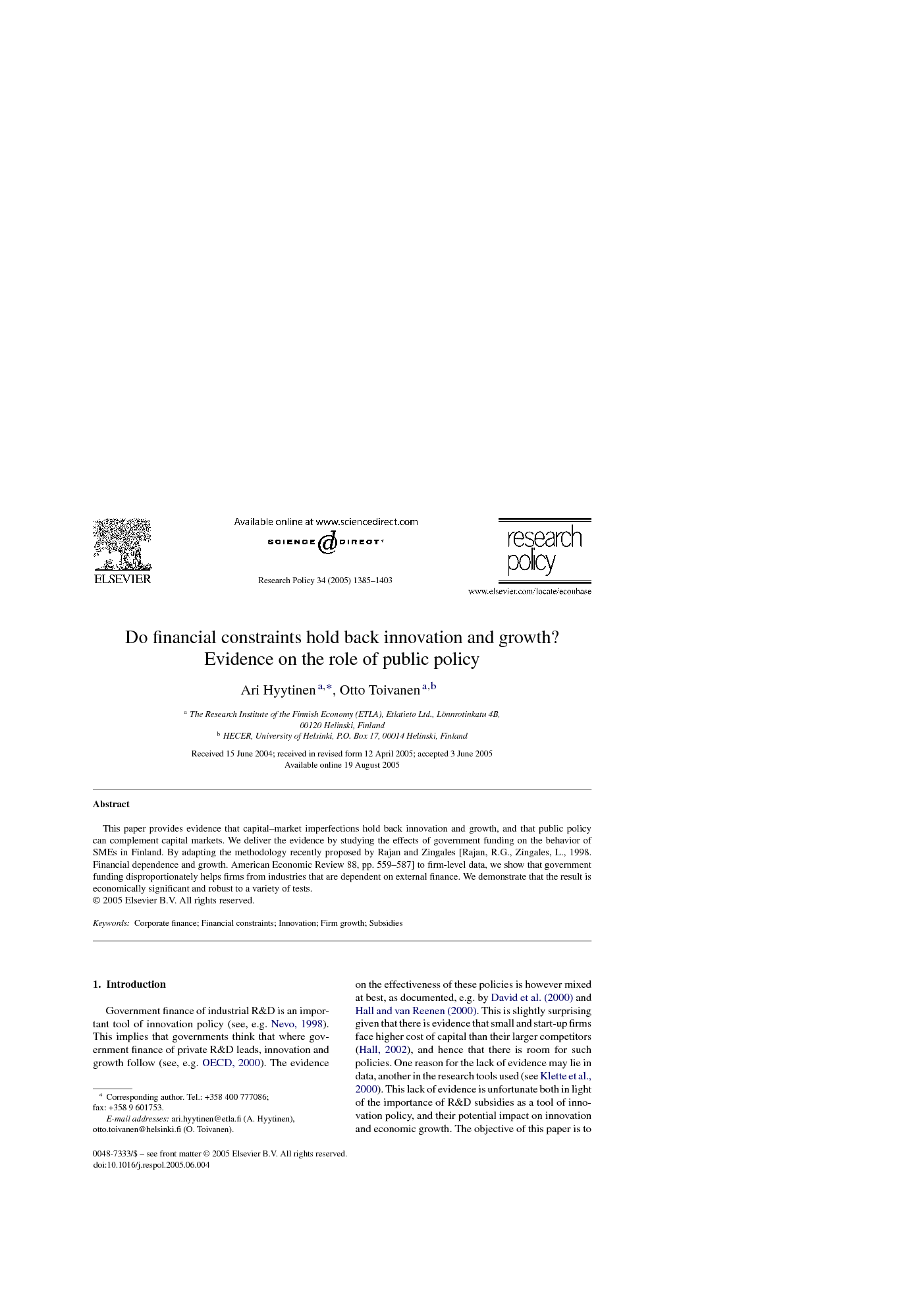 This paper provides evidence that capital–market imperfections hold back innovation and growth, and that public policy can complement capital markets. We deliver the evidence by studying the effects of government funding on the behavior of SMEs in Finland. By adapting the methodology recently proposed by Rajan and Zingales [Rajan, R.G., Zingales, L., 1998. Financial dependence and growth. American Economic Review 88, pp. 559–587] to firm-level data, we show that government funding disproportionately helps firms from industries that are dependent on external finance. We demonstrate that the result is economically significant and robust to a variety of tests.

Government finance of industrial R&D is an important tool of innovation policy (see, e.g. Nevo, 1998). This implies that governments think that where government finance of private R&D leads, innovation and growth follow (see, e.g. OECD, 2000). The evidence on the effectiveness of these policies is however mixed at best, as documented, e.g. by David et al. (2000) and Hall and van Reenen (2000). This is slightly surprising given that there is evidence that small and start-up firms face higher cost of capital than their larger competitors (Hall, 2002), and hence that there is room for such policies. One reason for the lack of evidence may lie in data, another in the research tools used (see Klette et al., 2000). This lack of evidence is unfortunate both in light of the importance of R&D subsidies as a tool of innovation policy, and their potential impact on innovation and economic growth. The objective of this paper is to provide evidence on the question of causality between finance in general and government finance to private R&D in particular, and firm growth.1 We hope thereby to contribute to the discussion of the effectiveness or otherwise of these policies. To deliver the evidence we focus on the effects of public policy on innovation and growth of small and medium sized enterprises (SMEs) in Finland. This paper's analysis tests a positive view of the role of active public policy in capital markets. To test the view, we borrow and combine insights from the literature on capital market restraints and growth (Hubbart, 1998 and Rajan and Zingales, 1998), and the research on the effects of public policy on firm performance (see, e.g. Lerner, 1999 and Wallsten, 2000 and Lach, 2002)2. We argue that if there are economically significant imperfections in capital markets and if ‘government finance leads’ (i.e. if it successfully complements capital markets), government funding may disproportionately help innovation (R&D) and growth of firms in industries that are dependent on external finance. It is this hypothesis that we develop and test in this paper. To provide new evidence on the role of government funding as a tool of innovation policy, we follow a recent paper of Rajan and Zingales (1998, RZ for short), where they made an important methodological contribution by identifying industries’ technological demand for external finance and measuring it in the US. The main assumption of RZ is that there is a technological reason why some industries rely more on external finance than others. A prime example of such technological variation is the cross-industry differences in the gestation periods of products. Another is the variation in industry life cycles, such as that between the tobacco industry and biotechnology. RZ estimate industry-level growth equations on data from other countries and include industry and country fixed effects, and an interaction term between an industry's technological demand for external finance and a measure of a country's financial development. 3 RZ find that after controlling for industry and country fixed effects, the coefficient of the interaction term is positive and statistically significant. Their result suggests that industries that are relatively more in need of external finance develop disproportionately faster in countries with better-developed capital markets. We build on RZ's methodology and amend it in two ways. First, in place of their financial development-variable, we use a measure of the regional availability of government funding to SMEs within a country. They argue that financial development liberates firms from the need of generating funds internally by helping firms raise capital from sources external to the firms at a reasonable cost. We think that government funding should lead to the same outcome, if it successfully augments capital markets. Second, we shift the focus to the effects of cross-regional, between-industry differences on a firm-level variable. By focusing on firm-level performance we can correct for region and industry characteristics. Importantly, we can simultaneously address the problem of reverse causality, which has been an important concern in the studies on finance and growth (see Rajan and Zingales, 1998), and selection effects, which have been an important concern in the literature on government funding and firm performance (see Wallsten, 2000). We apply the amended methodology to recently collected firm-level data on Finnish SMEs that allow us to disaggregate SME funding by its sources, including external sources and the government. Using these data, we identify an industry's need for external finance from data on SMEs operating in the metropolitan Helsinki area that is the financial center and capital of Finland. Under the assumption that capital markets in Helsinki are relatively frictionless, this method allows us to identify an industry's technological demand for external financing. Like RZ, we make the further assumption that such technological demand carries over to other geographical areas in Finland and we examine whether the availability of government funding (outside the metropolitan Helsinki area) helps firms in industries that are technologically dependent on external finance. The findings of this paper suggest that SMEs face an upward-sloping capital supply curve and hence that the market for SME finance is imperfect. The evidence is consistent with the view that financial constraints hold back innovation and growth, and the hypothesis that government funding can alleviate capital market imperfections.4 Beyond these conclusions, our results have no implications for public policy. In particular, one cannot draw conclusions about the welfare effects of government funding (cf. de Meza and Webb, 1987 and de Meza and Webb, 2000, and de Meza, 2002). The paper is organized as follows. Section 2 discusses sources of capital market imperfections and various motives for providing government funding to SMEs. Section 3 explains our empirical approach, and Section 4 describes the data. In this section, the main sources of government funding in Finland are also briefly described. Section 5 presents the regression results and investigates the robustness of our findings. Section 6 summarizes the paper.

The hypothesis put forward and tested in this paper is that if there are economically significant imperfections in capital markets, government funding may disproportionately help firms in industries that are dependent on external finance. We deliver evidence supporting this hypothesis. We do so by studying the effects of government funding on the R&D investments and growth orientation of SMEs in Finland. Our analysis shows, in particular, that firms in industries that are more dependent on external financing invest relatively more in R&D and are relatively more growth-oriented when they have more government funding (potentially) available. The findings of this paper suggest that SMEs face an upward-sloping capital supply curve and hence that the market for SME finance is imperfect. The evidence is consistent with the view that financial constraints hold back innovation and growth, and the hypothesis that government funding can alleviate capital market imperfections. These findings are not inconsistent with the view that government finance of industrial R&D can be an important tool of innovation policy. Nor are they incompatible with the well-known international comparisons of World Economic Forum (WEF, 2001) and International Institute of Management Development (IMD, 2002), and those of Global Entrepreneurship Monitor (GEM, 2001), suggesting that the efforts of the Finnish government may have been an important element of the recent economic development in Finland. While our results portray a positive picture of the efficacy of government funding in the presence of capital market imperfections, it is worth reminding the reader that well-intended but badly designed policies can do more harm than good. While this is true for any country, it is especially so for Finland, where the public institutions providing government funding are collectively a considerable actor in the market place. As the Finnish financial system matures further, there is almost by definition less room for government funding, whose allocation is not based on a price mechanism. We should therefore not overlook the risk that government funding may end up crowding out potentially profitable businesses of private financiers, distorting the private sector's investment incentives and even sustaining socially wasteful business activity. The finding that government funding may alleviate capital market imperfections is of interest to academics too, because it qualifies the picture portrayed by the recent papers of La Porta et al. (2002) and Sapienza (2004) on the effects of government ownership of financial institutions. While these papers have convincingly shown that the government ownership of financial institutions leads to misallocation of capital that can be detrimental to economic growth, our findings suggest that the type of government involvement may matter. It is very important to stress that beyond these conclusions, our results have no implications for public policy. In particular, one cannot draw conclusions about the welfare effects of government funding (cf. de Meza and Webb, 1987 and de Meza and Webb, 2000, and de Meza, 2002). Measuring these remains an important and challenging topic for future research.