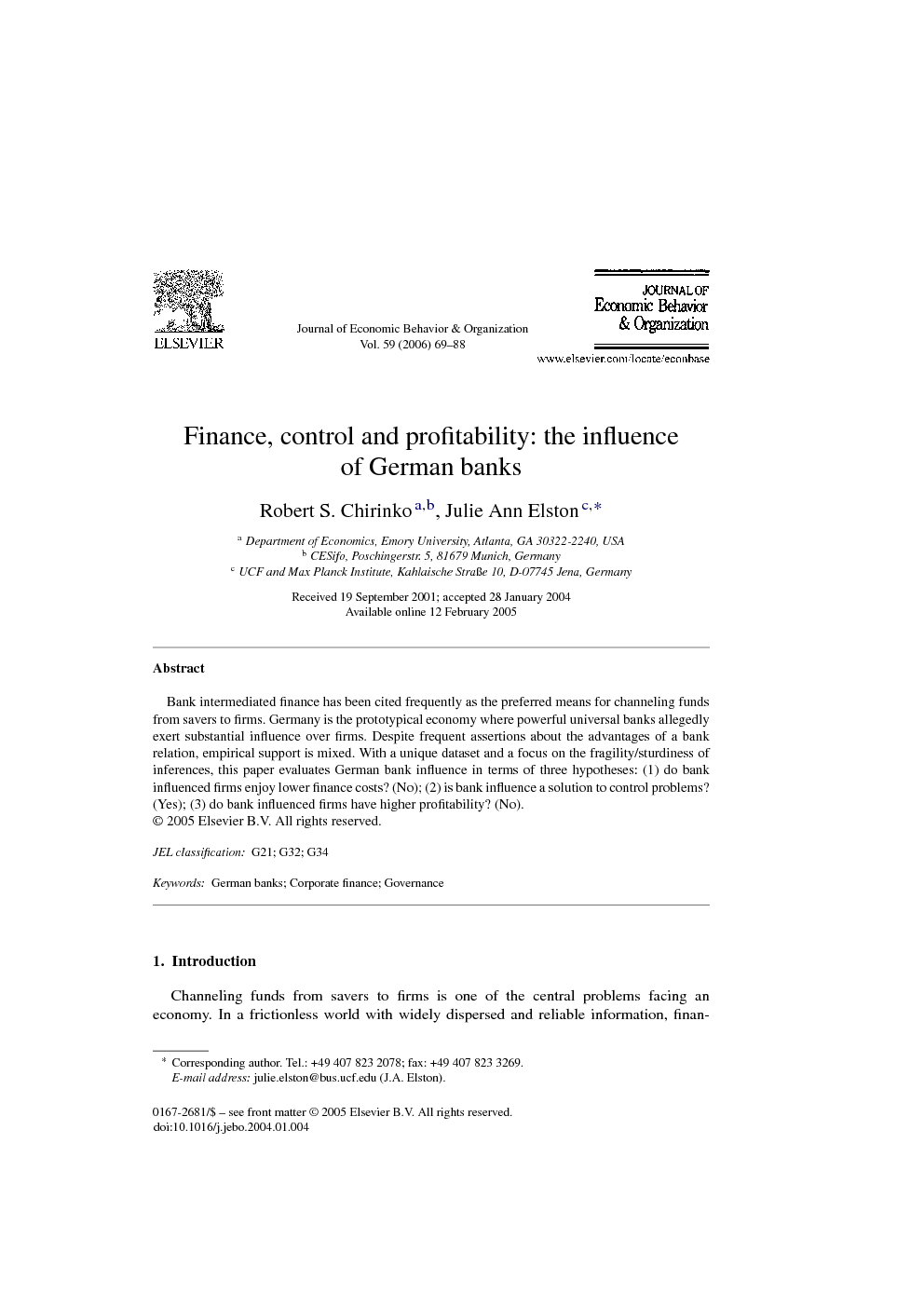 Bank intermediated finance has been cited frequently as the preferred means for channeling funds from savers to firms. Germany is the prototypical economy where powerful universal banks allegedly exert substantial influence over firms. Despite frequent assertions about the advantages of a bank relation, empirical support is mixed. With a unique dataset and a focus on the fragility/sturdiness of inferences, this paper evaluates German bank influence in terms of three hypotheses: (1) do bank influenced firms enjoy lower finance costs? (No); (2) is bank influence a solution to control problems? (Yes); (3) do bank influenced firms have higher profitability? (No).

This study has examined the German bank influence model (GBIM) with a unique dataset and a focus on the fragility/sturdiness of inferences. Three implications of the GBIM have been assessed. First, do bank influenced firms enjoy lower finance costs? German banks allegedly supply finance relatively cheaply because of their technical expertise and superior information. In addition to this direct finance channel, we also examine a certification channel that may lower finance costs indirectly. Our results suggest that finance costs are not lower for firms affiliated with banks. Second, is bank influence a solution to control problems? By combining superior information and consolidated power, banks are allegedly well positioned to monitor or discipline management. A sizeable equity stake may create substantial incentives to exercise corporate control. Bank influence and concentrated ownership are negatively related, which suggests that they are substitute means for controlling corporations. Third, do bank influenced firms enjoy higher profitability? The favorable financing and control outcomes associated with the GBIM, implies a favorable shift in the long-run cost curve and an increase in profitability (provided the firms operate in noncompetitive markets). This hypothesis is not supported in the current study. In contrast to Cable (1985), Gorton and Schmidt (2000), and Lehmann and Weigand (2000), we do not find a significant positive relation between bank influence and profitability. Our empirical results do not lend much support to the GBIM, and while deep structural links have not been uncovered, they permit us to draw a preliminary sketch of an alternative model of the German system of corporate control (though additional interpretations are possible). Control dilemmas are omnipresent, and firm owners address this problem by choosing a concentrated ownership structure or a bank affiliation (Table 3).6 Banks must be compensated for the resources employed in creating value for their client firms. Such compensation can take the form of fees for various services or borrowed funds (e.g., compensating balances) or interest charges that are above market levels.7 The empirical results in Table 2 indicate that bank affiliated firms do not hold greater amounts of bank debt, and these weakly negative relations are compatible with the following scenario: the firm participates in a loan market substantially controlled by its primary bank, the bank offers its profit-maximizing price for borrowed funds, and bank affiliated firms respond by borrowing less than independent firms facing lower effective loan rates. Relatively expensive bank lending charges and service fees survive in equilibrium because of the compensating benefits from the resolution of control problems enhancing economic performance. On balance, there is no net effect on profitability relative to independent firms (Table 4) as the benefits of control are counterbalanced by the inflated costs of banking services.8 This equilibrium is sustainable provided banks continue to be effective monitors, a role that has been questioned recently because of several prominent failures of corporate control. The results presented in this study and the above sketch of the German system of finance and control suggests several directions for future research. Demsetz and Lehn (1985) (United States) and Prowse (1992) (Japan) have shown that ownership patterns respond to the economic incentives for control. Our finding on corporate control substitutability raises the further question as to which policy and non-policy factors determine the type of control mechanism used in Germany. An additional issue is the purported role played by banks assisting firms in financial distress. Whether German banks function in a similarly supportive manner remains an important open question, especially since active support of financially distressed firms would impact the interpretation of the bank-profitability relation. Finally, data on service fees and the non-interest terms of lending would be valuable in developing a better understanding of the full cost of a bank relation. Further research on these issues should yield a deeper understanding of the structural characteristics of the German economy and the general nature of control mechanisms.