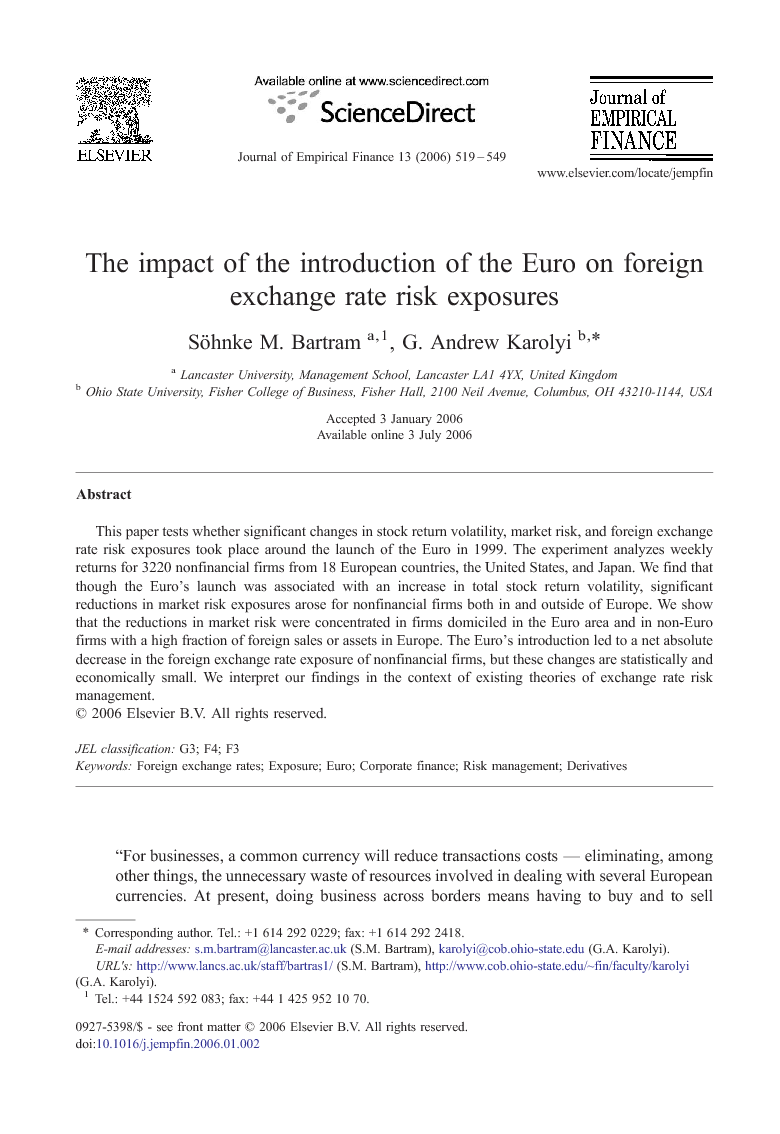 This paper tests whether significant changes in stock return volatility, market risk, and foreign exchange rate risk exposures took place around the launch of the Euro in 1999. The experiment analyzes weekly returns for 3220 nonfinancial firms from 18 European countries, the United States, and Japan. We find that though the Euro's launch was associated with an increase in total stock return volatility, significant reductions in market risk exposures arose for nonfinancial firms both in and outside of Europe. We show that the reductions in market risk were concentrated in firms domiciled in the Euro area and in non-Euro firms with a high fraction of foreign sales or assets in Europe. The Euro's introduction led to a net absolute decrease in the foreign exchange rate exposure of nonfinancial firms, but these changes are statistically and economically small. We interpret our findings in the context of existing theories of exchange rate risk management.

While financial theory predicts that foreign exchange rate changes affect the value of nonfinancial firms in general and those with foreign business operations or foreign competition in particular, the empirical evidence of foreign exchange rate exposures documented by a sizable number of empirical studies has been surprisingly weak. This paper investigates the effect of the introduction of the Euro as a common currency on 3220 corporations in 20 countries around the world including the United States and Japan. It evaluates the hypothesis that a common currency leads to lower foreign exchange rate risk and, thus, lower foreign exchange rate exposures of nonfinancial firms. We first confirm that the stock market volatility of many countries and stock return variances of nonfinancial firms increase during the sample period. There is some evidence, though weak, of lower increases for firms with foreign sales or assets in Europe relative to samples of control firms. Specifically, the increase in stock return volatility is smaller in the Euro area compared to other regions, indicating that firms in the Euro zone benefited most from the elimination of exchange rate risk in Europe. The second and most important finding in our paper is that the introduction of the Euro leads to lower market risk exposures for multinational firms in and outside of Europe. This finding suggests that foreign exchange rate risk is in part a source of non-diversifiable risk. The reduction in market risk is significantly larger for multinational firms relative to firms without foreign business in Europe in the same industry or with similar firm size. Consistent with prior research (e.g. Jorion, 1990 and Griffin and Stulz, 2001), our third stage of analysis shows that few sample firms show significant levels of incremental foreign exchange rate exposure. However, the Euro does have an impact on these exposures as they decline in absolute terms after the launch of the common currency, which implies that the Euro entailed a net reduction in foreign exchange rate risk exposures. Thus, consistent with Bartov et al. (1996), we are able to link changes in currency regimes, such as the transition between floating and fixed exchange rates, to foreign exchange rate exposures. Finally, in line with economic theory ( Bodnar et al., 2002), the changes of market and foreign exchange rate betas of multinationals are shown to be a function of firm characteristics (sales, the percentage of foreign sales in general and in Europe in particular), regional factors (geography, strength of currency), and industry characteristics (competition, traded goods). The finding of reductions in market betas suggests that nonfinancial firms should benefit from increased potential to carry business risk or debt, reduced cost of capital and should, thus, experience higher firm valuations. We know that changes in market risk could, in principle, also result from changes in financial leverage, but the empirical evidence does not support this alternative explanation. While ours is the most comprehensive firm-level analysis of foreign exchange exposures to date and capitalizes on an interesting and important experiment in the introduction of the Euro, we have to acknowledge several key limitations. Most important among these is the short time-horizon over which we run the experiment. Our data runs just under 4 years following the launch of the Euro. One expects a transition period to influence our results either before or after the event, but its duration and magnitude is not clear. Bodnar and Wong (2003) demonstrate how fragile inferences can be to using stock-return regression models with different specifications for exchange rate and market risks and when applied to different return horizons (from 1 month to 5 years); our short period of analysis post-Euro is likely to exacerbate such problems. Another concern is the appropriateness of our benchmarking of affected firms. Our sample of firms is broad, but it only includes the US and Japan outside Europe. It could be that our results are sensitive to the exclusion of Asian developed market firms and all emerging market firms in Europe, Asia, Africa and Latin America, for which Doidge et al. (2005) have shown important foreign exchange exposure effects. Finally, though our experiment controls for firm-level attributes such as foreign sales, market capitalization, and financial leverage, it is quite likely that macroeconomic and capital market effects play an important role in changes in stock return volatility as well as market and foreign exchange rate exposures. Our event-study approach limits our ability to offer any insights in this study, but it is important to recognize the potential contaminating influence of such country-level and global forces at work.