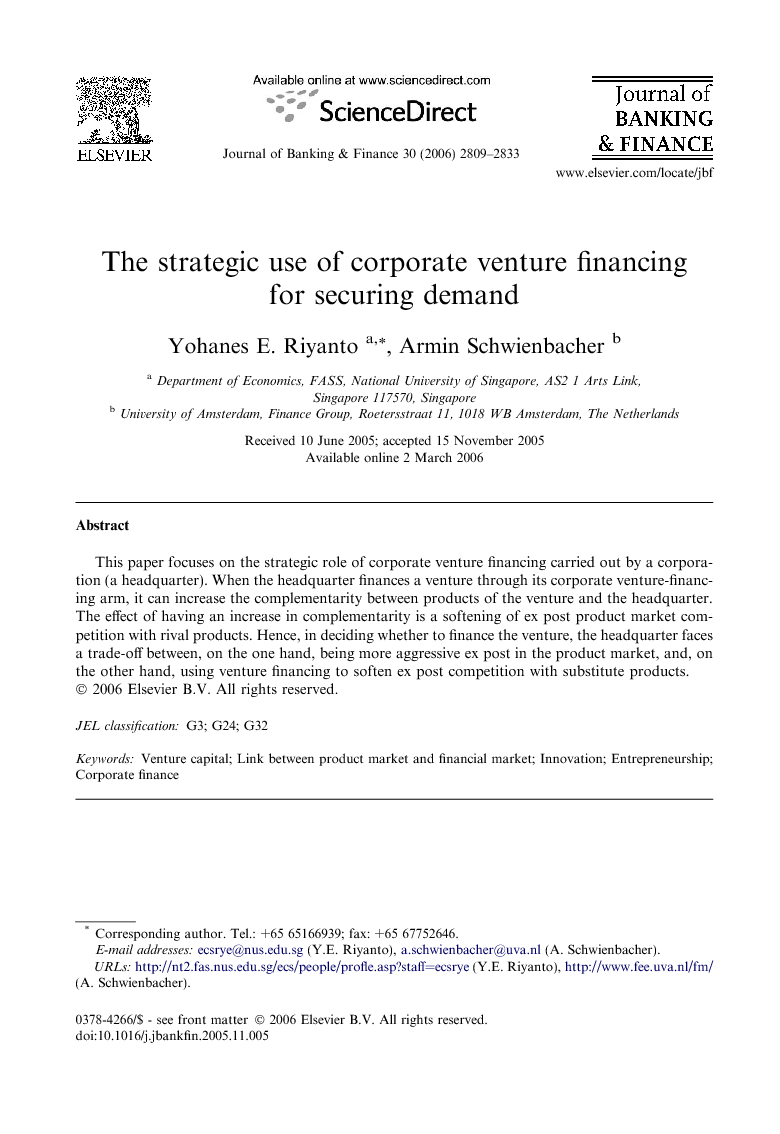 This paper focuses on the strategic role of corporate venture financing carried out by a corporation (a headquarter). When the headquarter finances a venture through its corporate venture-financing arm, it can increase the complementarity between products of the venture and the headquarter. The effect of having an increase in complementarity is a softening of ex post product market competition with rival products. Hence, in deciding whether to finance the venture, the headquarter faces a trade-off between, on the one hand, being more aggressive ex post in the product market, and, on the other hand, using venture financing to soften ex post competition with substitute products.

There are several reasons why a firm may establish a corporate venture fund (Gompers and Lerner, 1998). One of these reasons, which is quite often cited in the popular business news is the desire of big corporations to get an opportunity to sell their own product, and thus securing demand for the firm. In this paper, we provide a formalization of this kind of reasoning. Corporate venture financing allows the firm to influence the degree of complementarity between its product (used by the venture as an input) and the final product of the venture. This allows the headquarter to “steal” demand from other companies when the headquarter’s product can be substituted by other products. We show that in the absence of corporate venture financing there can be an expropriation problem. We also show that the (either direct or indirect) securing demand effect is made possible because corporate venture financing enhances the flexibility of a price-undercutting strategy in the product market. The firm will not have to undercut its competitor too much. At the extreme case, in which the firm is not able to do price-undercutting strategy, the corporate venture financing will enable the firm to “steal” demand from its competitors. The incentives to build a corporate venture fund increases with the competitive pressure in the product market and with the size of the market. Our framework can also be embedded into the literature on network economics, in particular on the issue of competing platforms. It is often the case that an operating system producer encourages software developers to create new applications using the operating system as a platform, and thus enhancing the value of the operating system in the market. By doing this, the producer is able to create a stronger base for its operating system in the market.26 In many cases, the operating system producer can accomplish this goal by providing software building blocks that lower the costs of developing complementary software applications. Cusumano and Yoffie (1998), for instance, mention that as of 1995 Microsoft spent about 65 million dollars annually supporting independent software developers and had about 400 technical support engineers who exclusively served independent developers. In our framework this assistance in terms of the provision of software building blocks is substituted with a financial assistance that will enable independent developers to innovate in a way that lowers the costs of developing complementary software applications. Integrating these two aspects in one framework and deriving conditions under which a particular approach is better would be an interesting area for future research. Last but not least, our paper can be extended into an entrepreneurship paper along the line studied by Hellmann (2002) by focusing more on the strategic action of the entrepreneur rather than the strategic action of HQ. It allows to investigate the incentive of an entrepreneur either to innovate inside HQ (intrapreneurship), or to establish a start-up firm outside HQ (entrepreneurship).