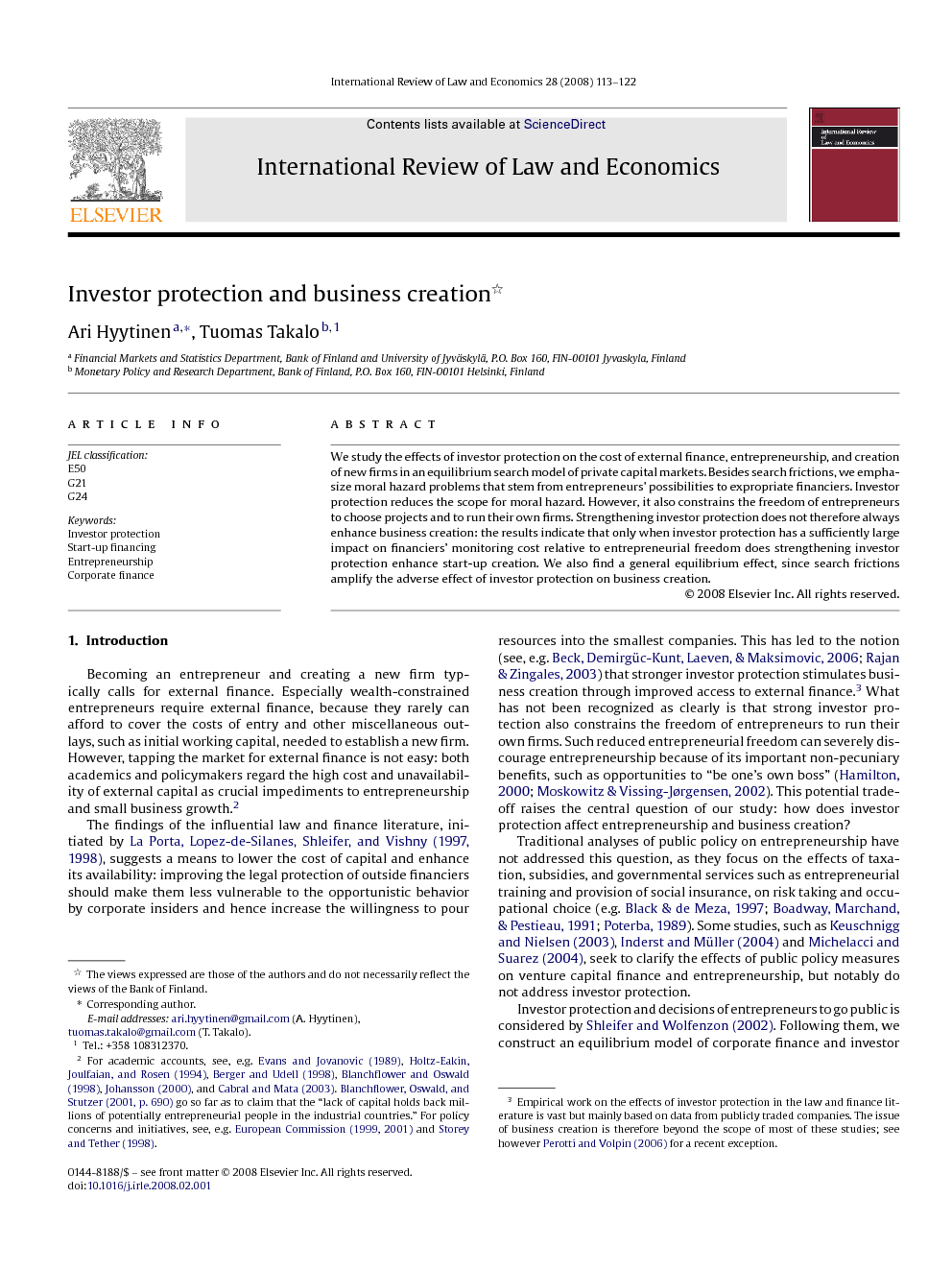 We built an equilibrium model of private capital markets characterized by search and contracting frictions arising from interim and ex post moral hazard. The search frictions delay the funding of start-ups, while the contracting frictions reduce the transferable match surplus. We examine how investor protection affects the cost of capital, entrepreneurship and business creation in this economy. Our analysis confirms the existence of the trade-off between investor protection and business creation suggested in recent empirical literature. It can, however, only emerge in economies where interim moral hazard problems are serious and financiers have some bargaining power. In our model the financiers’ bargaining power naturally stems from search frictions and, in equilibrium, better investor protection enhances the financiers’ bargaining position. This general equilibrium effect of investor protection arises from the financiers’ option to forego the current opportunity and search for a new match. There is no trade-off in economies where the ex post moral hazard is severe and thus monitoring costs relatively high, because there improvements in investor protection lower interest rates and stimulate business creation. In a desire to make a first cut on the role of investor protection in a private capital market with search frictions, we have only considered its generic effects. We show that, depending on the policy emphasis, improving the position of investors can have widely disparate consequences. A reform that mainly reduces monitoring costs lowers interest rates and promotes entrepreneurship and business creation. A reform that principally constrains the freedom of entrepreneurs to choose projects has the reverse effect of raising interest rates and discouraging entrepreneurship and business creation. It also turns out that the search frictions dilute the beneficial effect of investor protection on business creation. To obtain these insights, we abstract from modeling features that would enable us identify the form of small business finance and, consequently, the exact form of investor protection. We neither specify whether the financial contracts involve debt or equity nor our financier who could be a bank, an equity investor, a friend, another firm, or any other passive financier that does not provide business advice. To be able to carefully evaluate the effects of a specific legal reform, additional ingredients should be brought into the model. Nonetheless, we boldly offer several rather concrete policy recommendations. If we think that various transparency rules such as accounting, auditing, and disclosure govern monitoring costs more extensively than project choices, our analysis suggests that strengthening such transparency rules might stimulate entrepreneurship and business creation. In contrast, a cautious approach is called for with regulations controlling the freedom of entrepreneurs to choose projects. Many laws governing minority-shareholder protection such as low thresholds for calling extraordinary shareholders’ meetings, or qualified majority requirements for charter changes and sales of major assets, typically reduce entrepreneurial freedom. In particular, the antidirector rights index of minority-shareholder protection developed by La Porta et al., 1997 and La Porta et al., 1998 and its extensions by Pistor (2000) and Glaeser et al. (2001) include several rules that limit entrepreneurial freedom if applied to small companies. The implication here is that such laws should not be applied to small companies as harshly as to large corporations. In these respects, our findings are quite in line with the on-going company law reform in the UK: “Our law should provide the maximum possible freedom combined with the transparency necessary to ensure the responsible and accountable use of that freedom.” (The Final Report of the Company Law Review, Department of Trade and Industry, UK 2001, p. xi).