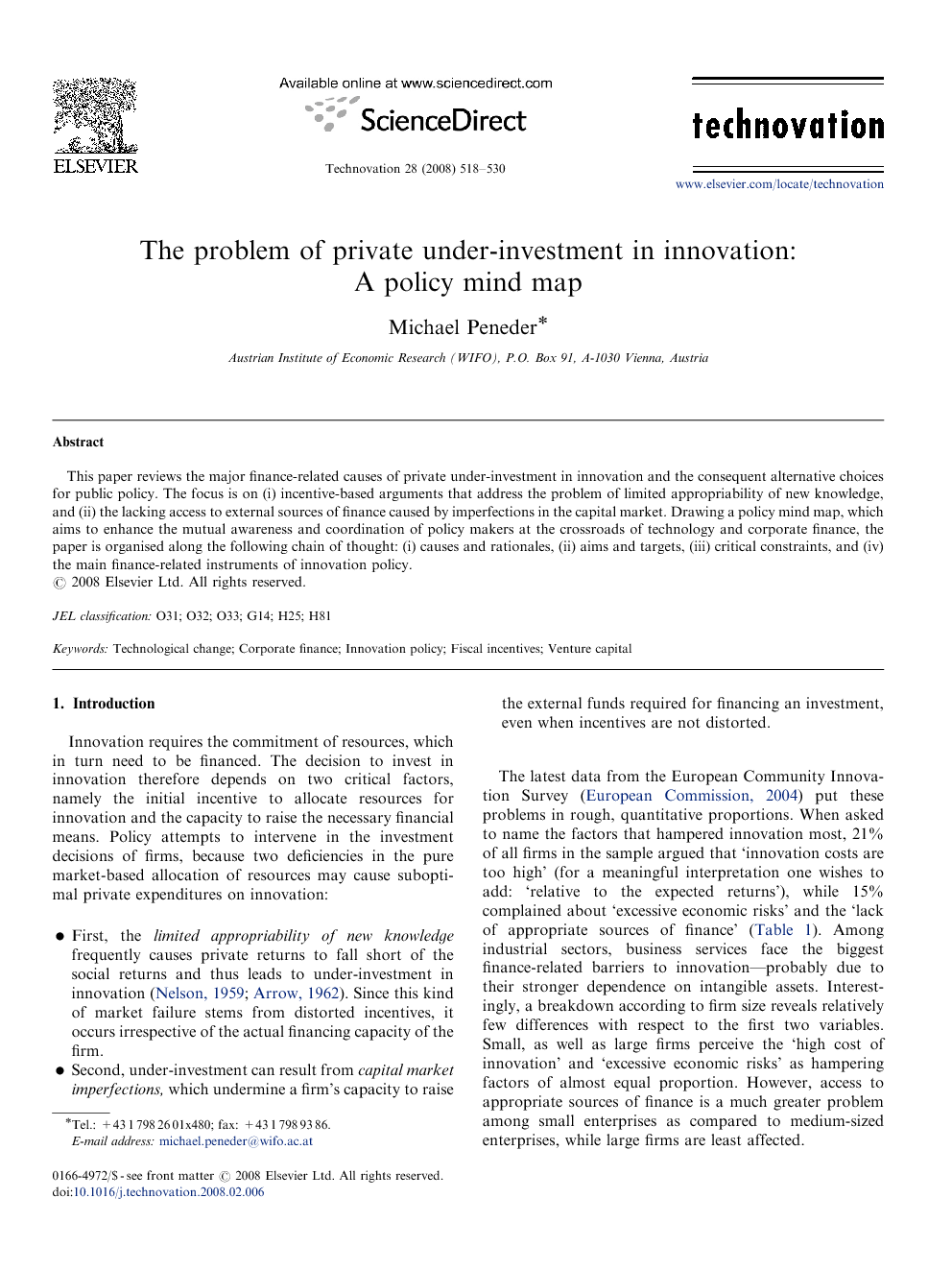 This paper reviews the major finance-related causes of private under-investment in innovation and the consequent alternative choices for public policy. The focus is on (i) incentive-based arguments that address the problem of limited appropriability of new knowledge, and (ii) the lacking access to external sources of finance caused by imperfections in the capital market. Drawing a policy mind map, which aims to enhance the mutual awareness and coordination of policy makers at the crossroads of technology and corporate finance, the paper is organised along the following chain of thought: (i) causes and rationales, (ii) aims and targets, (iii) critical constraints, and (iv) the main finance-related instruments of innovation policy.

Innovation requires the commitment of resources, which in turn need to be financed. The decision to invest in innovation therefore depends on two critical factors, namely the initial incentive to allocate resources for innovation and the capacity to raise the necessary financial means. Policy attempts to intervene in the investment decisions of firms, because two deficiencies in the pure market-based allocation of resources may cause suboptimal private expenditures on innovation: • First, the limited appropriability of new knowledge frequently causes private returns to fall short of the social returns and thus leads to under-investment in innovation ( Nelson, 1959; Arrow, 1962). Since this kind of market failure stems from distorted incentives, it occurs irrespective of the actual financing capacity of the firm. • Second, under-investment can result from capital market imperfections, which undermine a firm's capacity to raise the external funds required for financing an investment, even when incentives are not distorted. The latest data from the European Community Innovation Survey (European Commission, 2004) put these problems in rough, quantitative proportions. When asked to name the factors that hampered innovation most, 21% of all firms in the sample argued that ‘innovation costs are too high’ (for a meaningful interpretation one wishes to add: ‘relative to the expected returns’), while 15% complained about ‘excessive economic risks’ and the ‘lack of appropriate sources of finance’ (Table 1). Among industrial sectors, business services face the biggest finance-related barriers to innovation—probably due to their stronger dependence on intangible assets. Interestingly, a breakdown according to firm size reveals relatively few differences with respect to the first two variables. Small, as well as large firms perceive the ‘high cost of innovation’ and ‘excessive economic risks’ as hampering factors of almost equal proportion. However, access to appropriate sources of finance is a much greater problem among small enterprises as compared to medium-sized enterprises, while large firms are least affected.In response to the perceived needs, public policy provides financial support at various levels of governance. Focusing on enterprises active in innovation during the period 1998–2000 (Table 2), the overall share of European firms that received financial support is 29%, whereby industry (35%) was clearly favoured in comparison to services (19%). This observation applies in similar proportions to regional authorities, national governments and the EU (except for its RTD Framework Programmes).Economic theory provides good reasons for public intervention, and economic policy has applied these arguments to a growing number of initiatives. But the plethora of various rationales and new programmes, which has expanded rapidly over the past decades, increasingly becomes a source of confusion among policy makers, think tanks and (academic) consulting bodies alike. To give an example, it is sometimes argued that venture capital should become a private sector alternative to the public subsidisation of R&D, while other persons think of venture capital as a mere policy ‘hype’, which serves a very small fraction of firms and therefore has little impact on the economy at large. One function of the proposed ‘mind map’ will be to help reject the first idea, showing that the two instruments address two distinct causes of under-investment. At the same time, it will point out that in the case of venture capital we should generally endorse a narrow target more than a broad one. Overall, the mind map aims to provide a coherent general perspective on the various policy channels and endorses the importance of coordination among the various administrative units involved. In short, this paper seeks to compile a selective summary of the major arguments in the debate, providing a brief and concise review for students of innovation research as well as for policy makers at the crossroads of technology and corporate finance. The paper is organised along the chain of thoughts, which is displayed in the proposed mind map of Fig. 1. To begin with, the next section identifies finance-related causes of under-investment and the corresponding rationales for public intervention. Section 3 then addresses the specific targets and objectives at which policy should be aimed. Section 4 discusses critical constraints on the selection of policy tools. Section 5 elaborates the particular instruments, while Section 6 summarises and concludes.