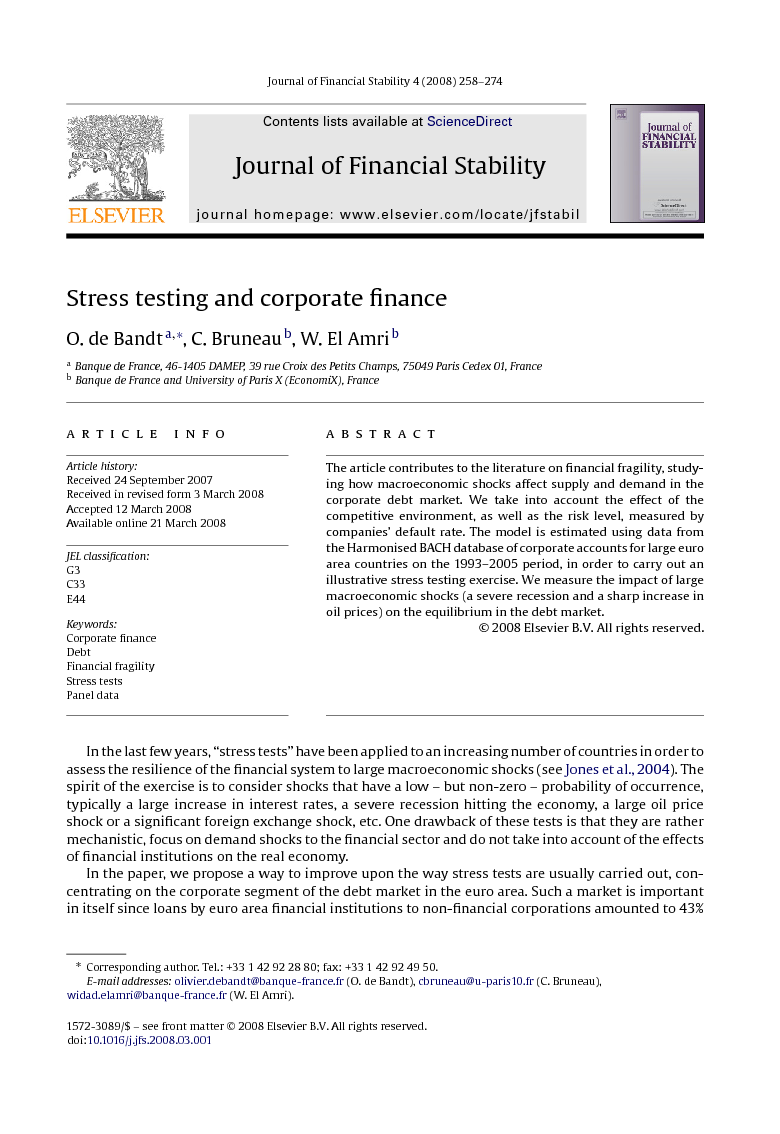 The article contributes to the literature on financial fragility, studying how macroeconomic shocks affect supply and demand in the corporate debt market. We take into account the effect of the competitive environment, as well as the risk level, measured by companies’ default rate. The model is estimated using data from the Harmonised BACH database of corporate accounts for large euro area countries on the 1993–2005 period, in order to carry out an illustrative stress testing exercise. We measure the impact of large macroeconomic shocks (a severe recession and a sharp increase in oil prices) on the equilibrium in the debt market.

In the last few years, “stress tests” have been applied to an increasing number of countries in order to assess the resilience of the financial system to large macroeconomic shocks (see Jones et al., 2004). The spirit of the exercise is to consider shocks that have a low – but non-zero – probability of occurrence, typically a large increase in interest rates, a severe recession hitting the economy, a large oil price shock or a significant foreign exchange shock, etc. One drawback of these tests is that they are rather mechanistic, focus on demand shocks to the financial sector and do not take into account of the effects of financial institutions on the real economy. In the paper, we propose a way to improve upon the way stress tests are usually carried out, concentrating on the corporate segment of the debt market in the euro area. Such a market is important in itself since loans by euro area financial institutions to non-financial corporations amounted to 43% of euro area GDP in 2005. The innovation of the paper is to distinguish explicitly between the demand for debt by corporate firms, and the supply of debt, notably by financial institutions. Of course, such an analysis is useful to study the transmission mechanism of monetary policy to the corporate sector, through the effect on its financial structure. However, its relevance is more direct in the context of “stress tests”. Indeed, the debt market is the major channel of transmission of macroeconomic shocks to the financial sector. We follow the “balance sheet approach” (Sorge and Virolainen, 2006), but this is an “extended portfolio approach” since we assume that risk is time-varying, even if it remains exogenous. By carefully distinguishing between supply and demand for debt, the analysis allows to improve upon the usual practice of stress tests. However, feedbacks effects remain contemporaneous and include only the reaction of banks’ supply to firms’ demand (there is no dynamic “second round” effects). In the paper we derive the equilibrium in the corporate debt market in terms of the interest rate and the volume of debt by non-financial corporations, estimating jointly a supply and a demand schedule for debt. Demand determinants (interest rates and activity variables) are rather standard – although they are derived from maximisation principles – but the modelling approach devotes significant attention to the supply side, with emphasis on the competitive conditions as well as on the risks faced by fund providers. Shocks to credit risks, by affecting the profitability of financial institutions may, as a consequence, also endanger financial stability Davis and Stone, 2004 and Ivaschenko, 2003. To study the debt market, we rely on the EU Commission’s Harmonised BACH database which provides detailed balance sheet and profit and loss accounts by sectors and size classes for several countries. Due to data availability, we concentrate on France, Germany, Italy and Spain on the 1993–2005 period. The structure of the paper is the following. In Section 1, we sketch the theoretical model which is used to motivate the variables that we use in order to derive the supply and the demand for debt by corporate firms. The data are presented in Section 2. Section 3 discusses the empirical results. Section 4 illustrates how the model can be used for stress testing by considering the effect of a severe recession and an oil price shock. Section 5 concludes.

In the paper we model the impact of macroeconomic shocks on the equilibrium in the corporate debt market, introducing the effect of competitive conditions (we provide evidence of a stronger competitive environment in the segment for large than small companies) as well as credit risk. Although risk is exogenous in our analysis, we explicitly measure how the equilibrium depends on time-varying risk in the economy. This provides a richer analysis of the debt market, as well as a way to improve upon the way stress tests are carried out. By measuring supply effects, one comes closer to an assessment of feedback effects from the financial sector to the real sector from shocks initiated in the real sector, although the analysis remains static. The results from the illustrative stress tests that we run in the last section, indicate that the equilibrium depends on the change in the default rate. In particular, in the first scenario of recession, the suppliers of capital, and financial institutions among them, raise interest rates in order to take into account the increase in the default rate. Such an effect is both statistically and economically significant. However, as already mentioned, the risk factor remains exogenous to the financial sector, while it may, to some extent, depend on credit distribution (an increase in debt is likely to bring a more than proportional increase in risk). Further work should therefore attempt to determine jointly the evolution of debt and risk.