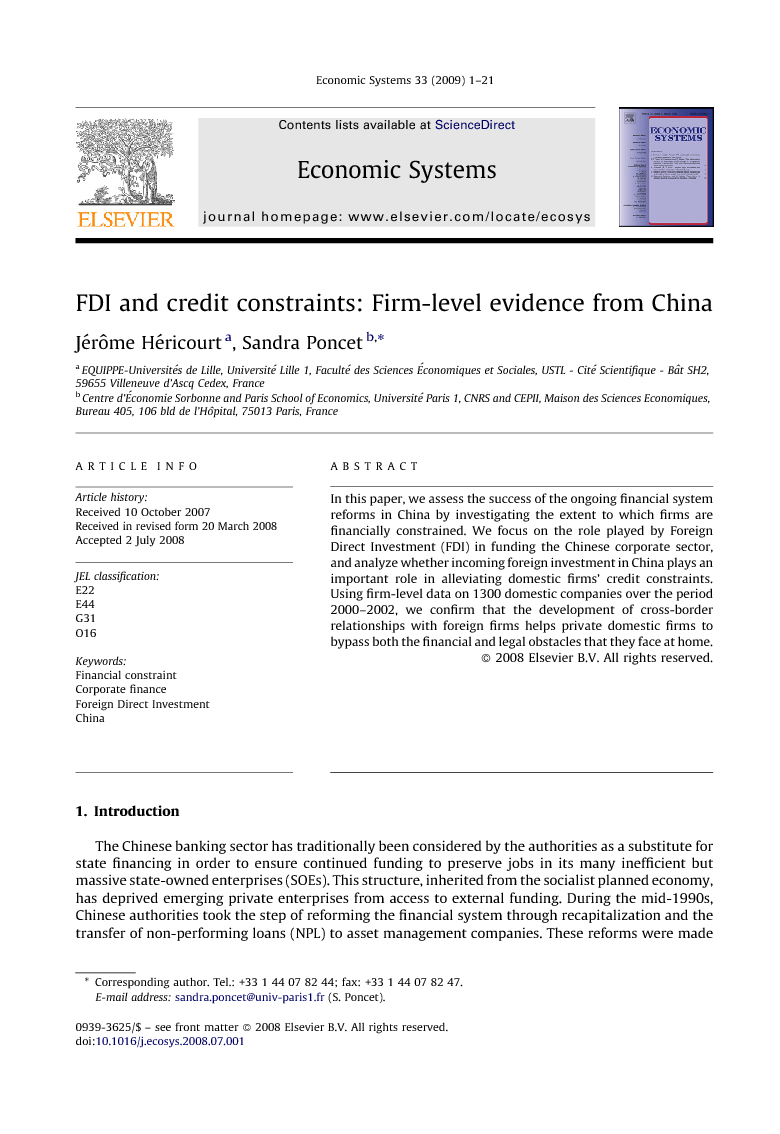 In this paper, we assess the success of the ongoing financial system reforms in China by investigating the extent to which firms are financially constrained. We focus on the role played by Foreign Direct Investment (FDI) in funding the Chinese corporate sector, and analyze whether incoming foreign investment in China plays an important role in alleviating domestic firms’ credit constraints. Using firm-level data on 1300 domestic companies over the period 2000–2002, we confirm that the development of cross-border relationships with foreign firms helps private domestic firms to bypass both the financial and legal obstacles that they face at home.

The Chinese banking sector has traditionally been considered by the authorities as a substitute for state financing in order to ensure continued funding to preserve jobs in its many inefficient but massive state-owned enterprises (SOEs). This structure, inherited from the socialist planned economy, has deprived emerging private enterprises from access to external funding. During the mid-1990s, Chinese authorities took the step of reforming the financial system through recapitalization and the transfer of non-performing loans (NPL) to asset management companies. These reforms were made necessary by China's WTO commitments to ending restrictions in the banking sector. The ability of the Chinese financial system to allocate capital more efficiently and to guarantee non-distortionary financial access to all companies, including private firms, is therefore a key indicator of the success of the ongoing reforms. This issue is especially important as access to external finance is a crucial determinant of business expansion.1 Businesses will invest in projects where the expected benefits exceed the costs. Efficient investment, however, only results when businesses do not face credit constraints which are unrelated to their own performance. Indeed, a great deal of research has underlined the importance of well-developed financial markets for economic growth.2 Relatively few firms have access to formal finance in China (Hallward-Driemeier et al., 2003), despite the country having a very large and deep pool of financial capital—an estimated US$4.5 trillion of assets. Based on the World Business Environment Survey (WBES) of the investment climate, conducted in 80 countries over 1999–2000, 80% of private firms in China cite financing constraints as a major obstacle.3 This figure, which is twice the median figure over the whole sample (38.5%), ranks China as the most financially constrained country in the sample, beating Haiti (74.4%) and the Kyrgyz Republic (66.7%). Approximately one-quarter of the 2400 firms interviewed in the World Bank investment climate survey (2003)4 reply “No” to the question “Do you have a loan from a bank or financial institution?”, and on average only about 25% of firms’ working capital comes from bank loans. Boyreau-Debray and Wei (2005) analyze the main pitfalls of the Chinese state-dominated financial system, and find low capital mobility within China due to local government interference and the mis-allocation of capital. Such distortions may force private Chinese firms to look for foreign investors (Huang, 2003). By establishing cross-border relationships with foreign firms, private domestic firms can bypass both the financial and legal obstacles that they face at home. Foreign Direct Investment (FDI) can in fact be seen as a form of equity financing (Harrison et al., 2004). Moreover, from the very beginning of the economic reforms in China, foreign-financed firms were granted legal status superior to that of other private firms. It is therefore possible that, in the Chinese case, FDI provides capital to firms which would otherwise be constrained in their growth by their inability to obtain funds, due to distortions in the banking sector. In this paper, we estimate a structural model based on the Euler equation for investment to investigate the extent to which firms are financially constrained and whether incoming foreign investment in China alleviates these constraints. We rely on firm-level data on Chinese companies provided by the Enterprise Analysis unit of the World Bank (World Bank, 2003)5 over the period 1999–2002. We test the following hypotheses: (1) domestic firms face different credit constraints depending on their size and private or state-owned status; and (2) direct foreign investment affects the credit constraints faced by domestic firms. Following Harrison and McMillan (2003), we modify the standard Euler investment model by introducing a borrowing constraint, and then use two measures of financial distress, the debt-to-asset and interest coverage ratios, as proxies for the shadow value of the constraint. In the absence of constraints, these financial variables should play no role in determining future investment. The results suggest that only domestic private firms face credit constraints in China. When we split domestic firms into public (state-owned) and private firms, we find that public firms’ investment decisions are insensitive to debt ratios and the cost of debt. Nor is there any evidence that public firms are affected by the presence of foreign firms. We interpret this as evidence consistent with the notion of a soft budget constraint for public firms (Qian and Roland, 1998). In contrast, private domestic firms seem more credit constrained than state-owned or foreign firms but their financing constraints soften in a context of abundant foreign investment. Our contribution is twofold. First, we shed light on the impact of the ongoing reforms of the financial sector by using a structural model to assess the importance of credit constraints in China. In doing so, we provide an additional test of the approach used by Fazzari et al. (1988) to identify credit constraints. Second, we focus on the part played by FDI in funding the Chinese corporate sector. More precisely, we ask whether FDI eases or exacerbates domestic firms’ credit constraints, and, more crucially, which types of firms benefit more from capital inflows. The paper is organized as follows. Section 2 presents the specific context of China's financial and corporate sector and reviews the literature on financing constraints. Section 3 presents the structural model of firm investment used to estimate the impact of direct foreign investment on firms’ financing constraints, and Section 4 presents the firm-level data used in our empirical work. Section 5 discusses the empirical results and undertakes several robustness checks. Section 6 concludes.

Using firm-level panel data across Chinese cities, we estimate a dynamic investment model to study the presence of financing constraints for Chinese domestic firms. Our results shed light on the impact of ongoing financial sector reforms designed to improve the efficiency of capital allocation. They suggest a striking difference between the credit constraints faced by domestic private and state-owned firms. We find that our two firm-level measures of financial distress (debt-to-asset ratios and interest coverage) do significantly affect investment for domestic private firms, suggesting that they are credit constrained. On the other hand, investment by state-owned firms is not significantly related to these indicators. Nor is there any evidence that this latter is significantly correlated with FDI inflows. However, the results suggest that FDI inflows are associated with a modest reduction in financing constraints for private domestic firms. FDI inflows do seem to reduce the imperfections faced by private domestic firms when dealing with financial markets. We thus find support for the general argument that the development of cross-border relationships with foreign firms helps private domestic firms to bypass both the financial and legal obstacles that they face at home (Huang, 2003). Our findings are moreover consistent with those in the literature that consider a role for demand in addition to the traditional supply-side perspective in explaining the massive amount of inward foreign investment in China. FDI to Chinese provinces is not only the consequence of good policies, but also results from distortions in the banking market and in state investment policies (Havrylchyk and Poncet, 2007).