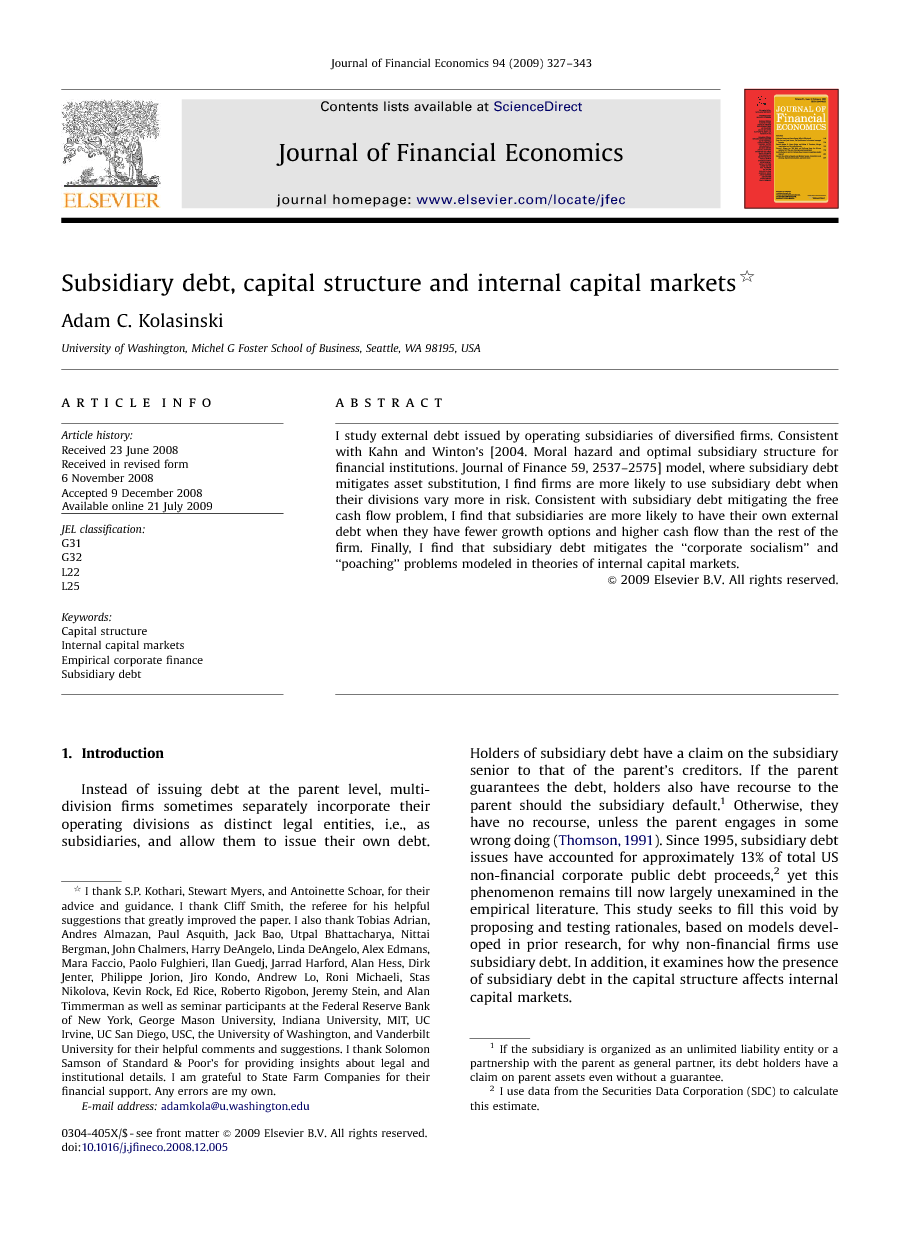 Instead of issuing debt at the parent level, multi-division firms sometimes separately incorporate their operating divisions as distinct legal entities, i.e., as subsidiaries, and allow them to issue their own debt. Holders of subsidiary debt have a claim on the subsidiary senior to that of the parent's creditors. If the parent guarantees the debt, holders also have recourse to the parent should the subsidiary default.1 Otherwise, they have no recourse, unless the parent engages in some wrong doing (Thomson, 1991). Since 1995, subsidiary debt issues have accounted for approximately 13% of total US non-financial corporate public debt proceeds,2 yet this phenomenon remains till now largely unexamined in the empirical literature. This study seeks to fill this void by proposing and testing rationales, based on models developed in prior research, for why non-financial firms use subsidiary debt. In addition, it examines how the presence of subsidiary debt in the capital structure affects internal capital markets. I estimate multinomial logistic models of the probability that a division is separately incorporated with its own subsidiary debt and whether that debt is guaranteed by the parent. I find that a division is more likely to have nonguaranteed subsidiary debt outstanding if it is in a firm whose divisions vary more in operating risk. This result supports the Kahn and Winton (2004) model, which predicts that firms with large cross-divisional variation in operating risk use nonguaranteed subsidiary debt to mitigate asset substitution problems. I also find some evidence that nonguaranteed subsidiary debt is more common in divisions with high cash flows and few growth options relative to the rest of the firm, suggesting firms use subsidiary debt to control Jensen's (1986) free cash flow problem in a manner that also controls the underinvestment problem. Finally, I find that the better a division's investment opportunities relative to the rest of the firm, the more likely it is to have parent-guaranteed subsidiary debt outstanding. Furthermore, when a division has parent-guaranteed debt outstanding, its cash flows are less likely to be diverted for investment in other divisions. As I discuss in more detail in the next section, the last two results imply that firms use parent-guaranteed subsidiary debt to protect their growth divisions from the “corporate socialism” and “poaching” problems of internal capital markets modeled in Scharfstein and Stein (2000) and Rajan, Servaes, and Zingales (2000). Nonguaranteed subsidiary debt shares with project finance debt the feature of creditors having no recourse to the parent.3 I thus consider models of non-recourse project debt (John and John, 1991; Leland, 2007), in which the non-recourse feature drives the empirical predictions. I test these predictions on my sample of nonguaranteed subsidiary debt and fail to find supporting evidence. This study contributes to the large literature on debt contract features used to mitigate bondholder–shareholder conflicts and agency problems. The relevant features considered here include the specific set of assets and cash flows over which debt has priority and recourse provisions. Other examples of literature in the broad area of debt contract features include, but are not limited to, Barclay and Smith (1995a), Childes, Mauer, and Ott (2005), Guedes and Opler (1996), and Johnson (2003), who study maturity choice; Barclay and Smith (1995b), who study to priority structure; Mian and Smith (1992), Morellec (2001), and Stulz and Johnson (1985), who study security provisions; and Billet, King, and Mauer (2007), Chava and Roberts (2008), and Smith and Warner (1979), who study covenants. My results also contribute to the literature on corporate diversification and internal capital markets. Thus far, the literature has largely focused on the question of whether internal capital markets within diversified firms are efficient on average, and the evidence is mixed. Numerous studies find evidence that investment polices of diversified firms appear less efficient than those of standalones, or that diversified firms are valued at a discount relative to standalones.4 Others, however, cast doubt on these results.5 My results imply that the issues surrounding internal capital markets are more complex. Previous research provides mixed evidence that diversification ceribus paribus reduces investment efficiency, but my findings suggest that firms take measures to mitigate this problem. Scharfstein (1998) provides evidence that improved governance can improve internal capital markets. My findings show financing policy is also important. Hence, together with Scharfstein, this study suggests that the question of how firms mitigate internal capital markets inefficiencies is as important an area of inquiry as the question of whether such markets are on average efficient. The rest of this study proceeds as follows. In Section 2, I develop rationales for subsidiary debt use and their empirical implications. In Section 3, I discuss my sample. In Section 4, I discuss my tests and present results. In Section 5, I examine alternative rationales for subsidiary debt and rule them out. Section 6 concludes.

This study empirically examines why firms sometimes separately incorporate some of their non-financial operating divisions as subsidiaries and include debt in these subsidiaries’ capital structures. I find that firms tend to include nonguaranteed subsidiary debt in their divisions’ capital structures when their divisions vary more in operating risk. This result supports the Kahn and Winton (2004) model, in which firms use nonguaranteed subsidiary debt to reduce asset substitution incentives. I also find some evidence that cash-cow divisions, those with high cash flows but fewer relative growth options, also tend to have nonguaranteed subsidiary debt outstanding. Though it is not as robust to alternative specifications of growth options, this result suggests firms use nonguaranteed subsidiary debt as a means to control the wastage of free cash flows in their cash cows without inducing underinvestment in their growth divisions. I also find that divisions within a firm tend to have parent-guaranteed subsidiary debt in their capital structures when they have investment opportunities better than the rest of the firm. Furthermore, I find that cash flows of divisions with parent-guaranteed debt have a smaller effect on investment in the rest of the firm than do the cash flows of divisions without such debt. Thus, parent-guaranteed debt appears to reduce the extent to which a division's cash flows are diverted and invested in other divisions. Taken together, this set of results provides evidence that firms use guaranteed subsidiary debt, at least in part, to protect their investment opportunity-rich subsidiaries from the underfunding and poaching problems modeled in Scharfstein and Stein (2000) and Rajan, Servaes, and Zingales (2000). Specifically how parent-guaranteed subsidiary debt protects firms’ growth divisions from poaching is not clear. I fail to find evidence that debt covenants restricting dividends to the parent have an effect, though my test has low power as it is limited to public debt. However, there are other potential mechanisms. For example, by issuing public debt backed by a high-growth division, a firm commits to publicly disclosing that division's cash flows and capital expenditures to outsiders, inviting scrutiny if the division gets poached. As the creditors of the subsidiary are senior to parent creditors, they have an interest in ensuring that the subsidiary's investment budget is not underfunded. Finally, it is possible that by allowing a division to raise its own capital, and guaranteeing its debt, a firm is signaling its desire to ensure that the division is fully funded and allowed to take advantage of all its profitable investment opportunities. Thus, it is likely that financing a subsidiary with its own parent-guaranteed debt is part of a package of measures firms use to nurture and protect their growth divisions. Exploring what other measures lie in this package will prove to be an exciting and fruitful area of future research in corporate finance.