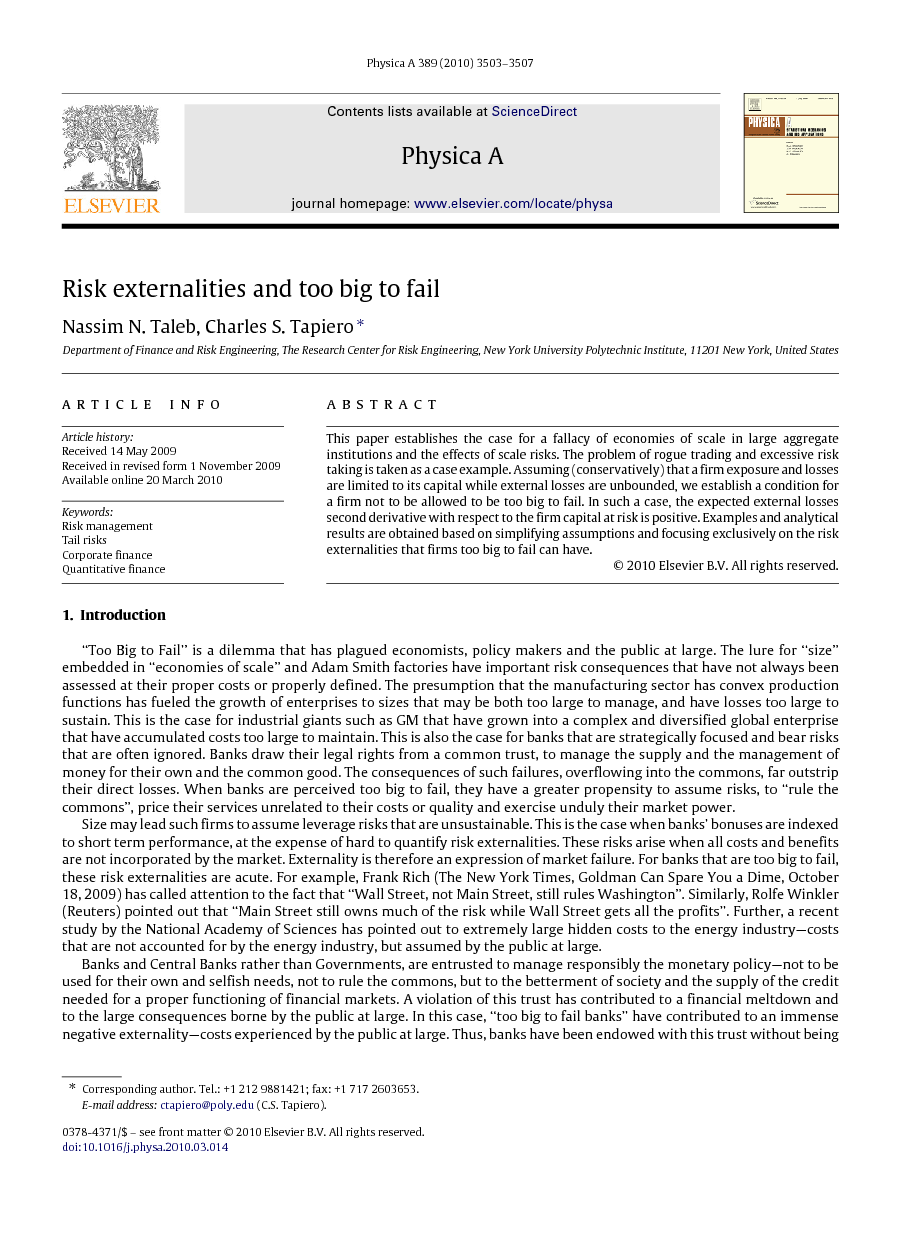 This paper establishes the case for a fallacy of economies of scale in large aggregate institutions and the effects of scale risks. The problem of rogue trading and excessive risk taking is taken as a case example. Assuming (conservatively) that a firm exposure and losses are limited to its capital while external losses are unbounded, we establish a condition for a firm not to be allowed to be too big to fail. In such a case, the expected external losses second derivative with respect to the firm capital at risk is positive. Examples and analytical results are obtained based on simplifying assumptions and focusing exclusively on the risk externalities that firms too big to fail can have.

The purpose of this paper was to to indicate that size matters in a nonlinear way and that the issues that pertain to managing evaluating firms that are too big to fail require a far greater awareness and a regulation of the risk externalities that these institutions represent. Firms that are “too big to fail” are “polluters” either by design when they over-leverage their financial bets or their speculative positions or when they are struck by a Black Swan. This is the case because their losses have far greater significance than their narrow well being affecting investors that had no part in their actions. In this sense, their costs are a risk externality to be confronted and regulated as such. For this reason, regulation of firms that are too big too fail, require that greater attention be given to their consequential external risks rather than application of VaR techniques to protect their internal losses. The growth of economic units large enough to integrate their external risk is of course not appropriate since the moral hazard risks resulting from their market power will be too great. Similarly, total controls, total regulation, taxation, nationalization etc. are also a poor answer to deal with risk externalities. Such actions may stifle financial innovation and technology and create disincentives to an efficient allocation of money. Coase observed that a key feature of externalities are not simply the result of one CEO or Bank, but the result of combined actions of two or more parties. In case of the financial sector, there are two parties, Banks that are “too big to fail” and the Government as a stand in for the public. Banks are entrusted rights granted by the Government and therefore any violation of the trust (and not only a loss by the bank) would justify either the removal of this trust or the takeover of the bank. A bargaining over externalities would, economically lead to Pareto efficient solutions provided that banking and public rights are fully transparent. However, the non-transparent bonuses that CEOs of large banks apply to themselves while not a factor in banks failure is a violation of the trust signaled by the incentives that banks have created to maintain the payments they distribute to themselves.