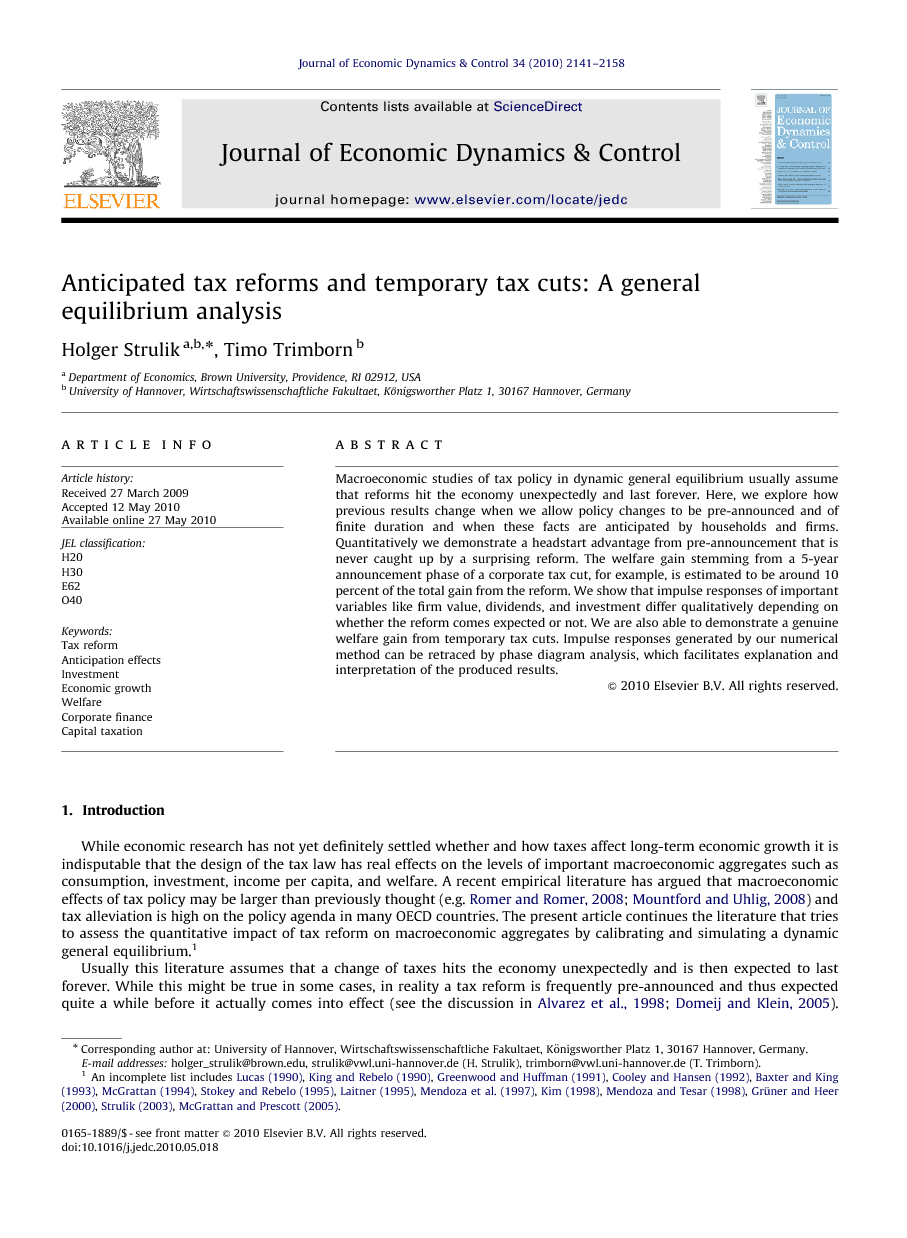 Macroeconomic studies of tax policy in dynamic general equilibrium usually assume that reforms hit the economy unexpectedly and last forever. Here, we explore how previous results change when we allow policy changes to be pre-announced and of finite duration and when these facts are anticipated by households and firms. Quantitatively we demonstrate a headstart advantage from pre-announcement that is never caught up by a surprising reform. The welfare gain stemming from a 5-year announcement phase of a corporate tax cut, for example, is estimated to be around 10 percent of the total gain from the reform. We show that impulse responses of important variables like firm value, dividends, and investment differ qualitatively depending on whether the reform comes expected or not. We are also able to demonstrate a genuine welfare gain from temporary tax cuts. Impulse responses generated by our numerical method can be retraced by phase diagram analysis, which facilitates explanation and interpretation of the produced results.

In this paper we have applied a new method to evaluate the quantitative macroeconomic consequences of anticipated tax reforms and temporary tax cuts. The mechanics of the numerical algorithm can be retraced by phase diagram analysis, a fact that facilitates an intuitive explanation of the obtained impulse response behavior. We have found that adjustment dynamics for anticipated policy reform differs significantly from an unexpected reform. In particular, we have demonstrated that a pre-announced cut of taxes causes a sizeable investment spurt during the announcement phase, i.e. before the reform becomes operative. The investment spurt generates a head-start advantage of the announced reform vis a vis a surprising (but otherwise identical) reform, which is only caught up as time goes to infinity. For a reduction of corporate taxes we predict that a 5 year lead of pre-announcement generates an extra welfare gain of about 10 percent of the total gain from the reform, which is estimated to be more than a third of a percentage point for a 10 percentage point tax cut. A structurally similar investment spurt and extra welfare gain arises from pre-announcement of a higher future investment tax credit. Results are less favorable for taxation of private capital income. The again positive announcement effect is not sufficient to turn a (mildly) negative welfare effect positive. Besides these quantitative results we have also found and explained important qualitative differences between pre-announced and surprising tax reforms. These differentiated effects are caused by adjustment of financial structure, which is modeled as endogenous in our setup. For example, dividends are predicted to rise when a pre-announced investment tax credit becomes operative but are predicted to fall in case of a surprising policy. For a cut of private capital income taxes the model predicts that the investment rate falls (vis a vis the previous period) when an announced tax cut comes into action while it is predicted to rise in case of a surprising tax cut. With respect to actual policy evaluation these findings suggest that one has to sort out carefully whether a reform came expectedly or surprisingly, in particular, for the interpretation of events around the time when a reform becomes operative. Finally, we were able to demonstrate a genuine welfare gain arising from a temporary cut of the corporate tax rate and from a temporarily higher investment tax credit. While small initially the gain rises with length of the implementation period. In particular for the investment credit we have found a non-linearity. Doubling the implementation period more than triples the welfare gained. We have demonstrated that temporary policy in general drastically under-performs vis a vis a permanent policy, in particular when the implementation period is short. For example, if the corporate tax cut is granted for 5 years it generates around 11 percent of the welfare obtained from a permanent tax cut of equal size. This implies that large errors are excepted when a tax policy which is known to be temporary is evaluated as if being permanent. We have generally found that there is much more variation in impulse responses of important macroeconomic variables than indicated by the aggregated welfare gain. The aggregation over time hides the fact that ups and down of investment, profits and consumption before and after reform are to a large extent counterbalancing each other. We thus expect important intergenerational distribution effects from the anticipation of future policies. An extension of our method towards a Blanchard (1985)–Yaari (1965) setup seems to be a promising project for the future.